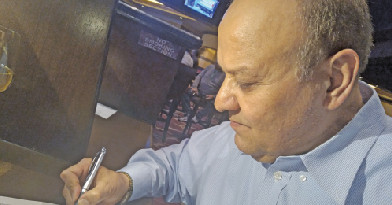 LAS VEGAS — Majid Hamid Jr. sat in the passenger seat of his father’s prized 1957 Chevy Bel-Air station wagon, in classic Larkspur Blue, as they trekked north on Route 1 that night from Baghdad to visit kin in Samarra.

Near the end of the 80-mile trip, Majid Sr. noted his son’s absorption in something overhead.

“A thousand and three.”

Known to Green Valley Ranch sportsbook regulars — and, no doubt, to many in Chicago, where he resided for 20 years — as “Magic,” Junior says, “I remember that vividly.”

He was 5 or 6, about when he also began accepting buddies’ dares to dive off Baghdad bridges into the Tigris River. Those leaps of faith were 10 or 12 stories, but he always trusted the river’s depth.

Having failed to properly place his hands in front of him, he once emerged as if his coconut had smacked concrete.

“Dizzy for two or three minutes, but no big deal. All the different bridges, especially after school. Shenanigans. Challenges. Kids do crazy things over there, and some were extremely gutsy.”

He swirls a glass of Chardonnay as he peruses statistics and proposition sheets a few days before Super Bowl LVI. The 65-year-old retiree had earmarked up to $20,000 to bet on props.

What began as a study of that prop action, from someone who takes sports wagering a bit more seriously than the average punter, bloomed into a profile of a former Baghdad bridge-diver whose facility with numbers is sharp.

“I am a risk-taker, by nature,” says Magic. “I was always that way — I don’t talk about it, I just do it, forget the consequences. Just execute the plan. Yes, I would say I’ve had an eventful life.”

Generations of Hamids were invested in lumber and commercial real estate. Junior left his parents and 11 older siblings to study in Greece. In 1980, he made the gutsy move to the United States.

During a quality-control shift at the Presbyterian Hospital cafeteria in Dallas, in his early days in America, someone called out, “Magic!” It stuck.

He’d earn undergraduate and Masters degrees at Texas A&M, in graphic-arts systems, and obtain an additional Masters at the Rochester Institute of Technology. He became a U.S. citizen in 1985, married in 1986.

He left for Chicago, and the R.R. Donnelley & Sons printing company, in 1998. Seven years later, he took a post as a Chicago Tribune operations manager. Clashes with a superior ended that gig in 2006, and he prospered as a day trader.

Over the decades, family reunions have occurred in Brazil, England, France, Greece and Italy.

Magic and school-teacher wife Teresa retired to Las Vegas in 2018. He had first visited in the early 1980s, and several annual trips became customary.

He favors poker and blackjack. A few years ago at Bellagio, he and two friends made $600,000 in a 48-hour blackjack run.

College and pro football — he made $330,000 on the NFL in 2016 — get most of his sports-handicapping attention, then college hoops and the NBA, hockey and baseball.

GVR ticket writers reward his wagers with drink coupons, which he lavishes upon pals who occupy the row of cubicles behind him. His smile is quick, laughter contagious. He’s generous with information.

Most nights, Magic analyzes 10 to 12 games, with power ratings and other resources, to bet the following day. Thirty minutes a game, or 15 minutes per team. He spends up to six hours, evaluating his time at $50 per hour.

Magic risked only about $8,000 on Super Bowl LVI. The price of many targets worsened as the game neared, which limited his action.

For the 30th time in 32 years, Silver State sportsbooks profited on the Super Bowl.

Magic did lose his big bet, which would have made $3,000, on neither team converting three consecutive scores, at about +170. Cincinnati tallied a touchdown, added another and, early in the third quarter, booted a field goal.

“I do that quite a bit during football season. I don’t shun them — that’s wrong. You can turn things around in your favor. You can successfully turn the table on the sportsbook.”

Believe otherwise? Magic suggests taking a dive off a bridge.