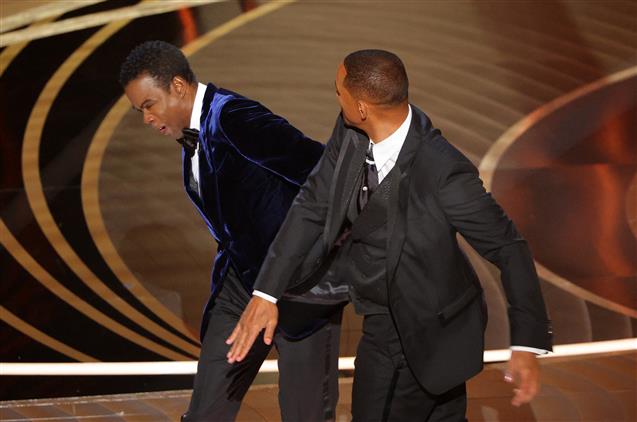 Best actor winner Will Smith smacked presenter Chris Rock in the face and shouted a vulgarity at the comedian for making a joke about his wife’s hairstyle in a shocking moment, overshadowing the Oscars ceremony on Sunday.

Taking to her Instagram Story, Neetu Kapoor shared a picture and captioned it as, ‘’And they say women can never control their emotions.”

“At your highest moment …be careful that’s when the devil tries to come for you,” tweeted Cardi B.

Varun Dhawan also posted on his Insta Story saying, ‘’Wow didn’t expect that also @chrisrock has a chin.” Richa Chadha on the other hand shared a meme and wrote the famous dialogue of Dabangg, “Thappad se darr nahi lagta sahab…”

Meme-makers had a field-day. From a scene of Batman comics to Spiderman’s multi-verse, the memes have touched almost every angle. One Instagram user wrote, “America mein bhi Jat hain, Chaudhary Will Smith.”

Now there’s Twitter page by the name of Chris Rock’s Cheek and the bio reads, “Keeping a certain wife’s name out my mouth…”And guess who are the three people it follows – Jada Pinkett Smith, Chris Rock and Will Smith’s Right Hand!

About 45 minutes later, when accepting his first Oscar for best actor for his role in King Richard, Smith apologised to the Academy of Motion Picture Arts and Sciences and his fellow nominees in a tear-filled speech, but not to Rock. “I want to be a vessel for love,” Smith said during his acceptance speech.

The episode upstaged the rest of the three-and-a-half-hour show, and was sure to become one of the most memorable moments in 94 years of Academy Awards. It may cost Smith his sterling reputation in Hollywood, but not a criminal charge, at least for now, as Los Angeles police said Rock declined to file a police report.

The incident began when Rock was roasting some of the nominees and made fun of Smith’s wife, Jada Pinkett Smith. “Jada, I love you. G.I. Jane II, can’t wait to see it,” he said, referencing the 1997 film G.I. Jane in which actress Demi Moore shaved her head.

It was unclear whether Rock, a comedian and actor, was aware that Smith’s wife suffers from a disease that causes hair loss. But Smith quickly stood up and marched toward the stage to confront the comedian. Rock had his hands behind his back when Smith threw an open hand at his face that produced an audible smack. Rock somehow stayed on his feet.

“Oh, wow! Wow! Will Smith just smacked the shit out of me,” Rock said as the audience laughed, thinking it was a skit. — Reuters