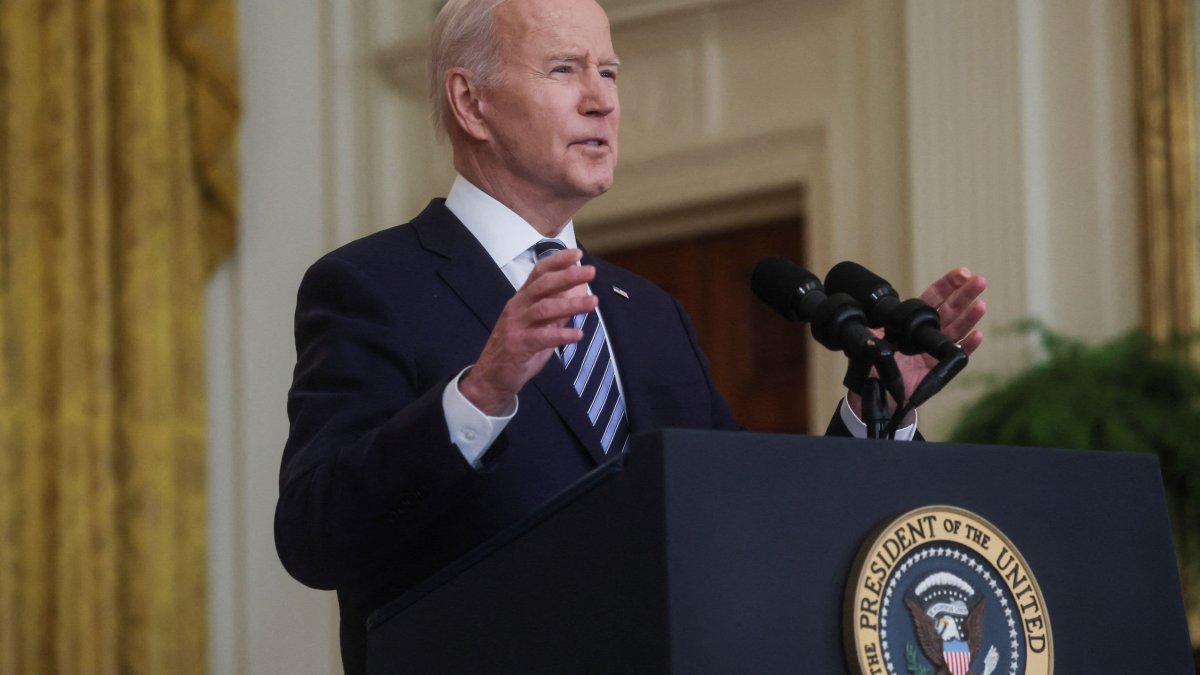 NOTE: Live coverage of the speech will air on NBC Chicago and can be watched in the player above starting at 8 p.m. CT.

When can you catch President Joe Biden’s first State of the Union address?

The momentous speech is set for 8 p.m. CT Tuesday night and had initially been conceived by the White House as an opportunity to highlight the improving coronavirus outlook and rebrand Biden’s domestic policy priorities as a way to lower costs for families grappling with soaring inflation. But it has taken on new significance with last week’s Russian invasion of Ukraine and nuclear saber-rattling by Vladimir Putin.

Here’s what to know about the address:

How to Watch the State of the Union Live Tuesday

Live coverage of the speech will air on NBC Chicago and can be watched in the player above starting at 8 p.m. CT.

Peacock will also have live coverage, beginning with The Choice With MSNBC featuring Zerlina Maxwell on “Zerlina” starting at 5 p.m. CT. Maxwell and her guests will break down the State of the Union through the lenses of racial reckoning, the ongoing pandemic and women’s rights in America. “The Mehdi Hasan Show” will then provide coverage starting at 6 p.m. CT and return following the address to offer reaction and analysis.

The speech will also be broadcast by major networks and cable news TV channels. The White House plans to stream it at WH.gov/live, as well as on its YouTube, Facebook and Twitter pages. Live coverage will also be provided by C-SPAN, C-SPAN Radio and C-SPAN.org. NPR is streaming the speech in addition to offering live coverage to its member radio stations.

What will the president talk about?

Biden will address a mostly full and mask-optional crowd in the House chamber, one sign of the easing coronavirus threat. But he’ll also speak from within a newly fenced Capitol due to renewed security concerns after last year’s insurrection.

He now will include Russia’s invasion of Ukraine when he speaks to Congress and the threats to democracy posed by Putin.

“Certainly, what we’re seeing on the ground in Ukraine, the fact that the president has built a coalition of countries around the world to stand up against Russia and Putin and put in crippling sanctions, that is part of what people will hear,” White House press secretary Jen Psaki said Monday in an interview on MSNBC.

Rising energy prices as a result of Russia’s war in Ukraine risk exacerbating inflation in the U.S., which is already at the highest level in 40 years, eating into the earnings of Americans and threatening the country’s economic recovery from the pandemic. And while the geopolitical crisis in Eastern Europe may have helped to cool partisan tensions in Washington, it can’t erase the political and cultural discord that is casting doubt on Biden’s ability to deliver on his pledge to promote national unity.

White House officials acknowledge the mood of the country is “sour,” citing the lingering pandemic and inflation as sources of blame. Biden, in his speech, will highlight the progress from a year ago — with the majority of the country now vaccinated and millions more people at work — but also acknowledge that the job is not yet done, a recognition of American discontent.

Biden aides say they believe the national psyche is a “trailing indicator” and will improve with time. But time is running short for the president, who needs to salvage his first-term agenda to revive the political fortunes of his party ahead of November’s midterm elections.

Where his joint address last year saw the rollout of a massive social spending package, Biden this year plans to repackage past proposals in search of popular and achievable measures he hopes can win bipartisan support in a bitterly-divided Congress ahead of the midterms.

The president was set to highlight investments in everything from broadband access to bridge construction from November’s $1.2 trillion bipartisan infrastructure law, holding it up as an example of government reaching consensus and delivering change for the American people.

He also planned to appeal to lawmakers to reach a compromise on rival competitiveness bills that have passed the House and Senate, both meant to revitalize high-tech American manufacturing and supply chains in the face of growing geopolitical threats from China.

The speech comes as progress on many of Biden’s other legislative priorities remains stalled on Capitol Hill, after Democratic Sen. Joe Manchin scuttled the sweeping “Build Back Better” spending bill that Biden championed last fall.

As part of his pitch to voters, Biden will aim to resurrect components of the legislation, but with a new emphasis on how proposals like extending the child tax credit and bringing down child care costs could bring relief to families as prices rise. He was also set to lay out how his climate change proposals would cut costs for lower- and middle-income families and create new jobs.

“The president will absolutely use the word inflation tomorrow and he will talk about inflation in his speech,” said Psaki. But she emphasized that Biden was focused on “how people experience it” rather than looking at it as a statistic.

As part of that push, Biden is expected to call for lowering health care costs, pitching his plan to authorize Medicare to negotiate prescription drug prices, as well as an extension of more generous health insurance subsidies now temporarily available through the Affordable Care Act marketplaces where 14.5 million people get coverage.

He also plans to propose new initiatives on mental health that dovetail with growing bipartisan interest in Congress amid evidence that the national psyche has been damaged by the pandemic. The plan includes steps to protect kids on social media, requiring insurers to cover three mental health visits annually at no cost to the patient and added investments in the new national suicide hotline — 988 — that is scheduled to go live later this year.

While prospects for congressional passage were slim, Biden also was set to appeal for actions around voting rights, gun control and police reform, which have been hamstrung despite his Democratic majority.

Biden was expected to showcase what he’s done so far — for example, acting to crack down on “ghost guns,” homemade firearms that lack serial numbers used to trace them and are often purchased without a background check.

On voting rights, legislation stalled after Manchin and Arizona Sen. Kyrsten Sinema denied Senate Democrats the chance to use a workaround that would allow them to pass the bills with their thin 50-50 majority instead of the 60 votes normally required.

The voting legislation written by congressional Democrats would bring in the biggest overhaul of the U.S. elections in a generation by striking down hurdles to voting enacted in the name of election security. Republicans say the changes are not aimed at fairness but at giving Democrats an advantage in elections.

Biden will also push the Senate to confirm Ketanji Brown Jackson to be the first Black woman on the Supreme Court. He nominated her last week.

Ahead of the speech, the physician’s office for Congress announced that it was lifting the House’s face-covering requirement after the federal government eased its guidelines for mask wearing. Now, mask wearing will be optional in the House chamber, which will be open to all members of Congress, but still no guests.

All those who attend will be required to take a COVID-19 test before Biden’s address.

Biden aims to use his remarks to highlight progress made against COVID-19 and to guide the country into a “new phase” of the virus response that looks more like pre-pandemic life.

Seating for Biden’s first address to a joint session of Congress, last April, was capped at about 200 people — about 20% of usual capacity for a presidential presentation. White House aides fretted that a repeat this year would have been a dissonant image from the message the president aims to deliver to the American people.

“I think you’re going to see it look much more like a normal State of the Union, ” said White House chief of staff Ron Klain. “It’s going to look like the most normal thing people have seen in Washington in a long time.”