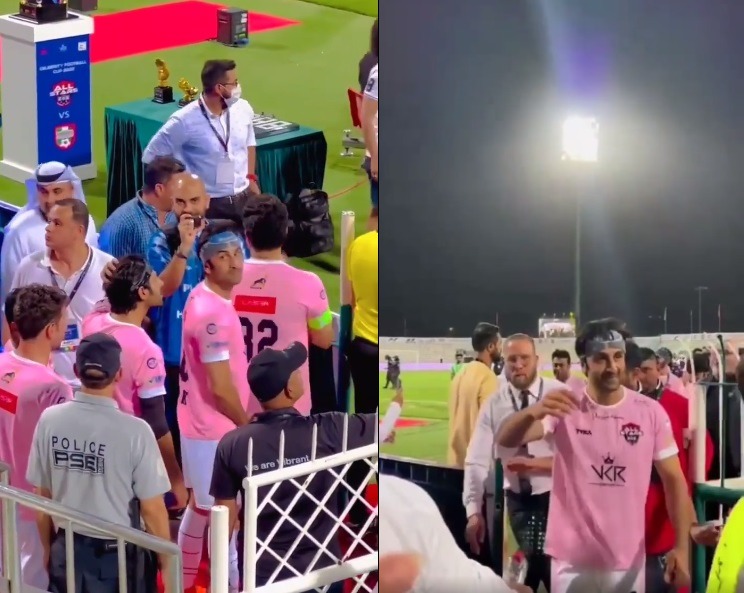 Ranbir Kapoor has a dedicated fan following. The chocolate boy of Bollywood rules the hearts of his fans. A new viral video shows us why. The actor was recently in Dubai for the Celebrity Football Cup 2022 for producer Bunty Walia’s team.

There’s a video that shows the Brahmastra actor making his way to the field. Abhishek Bachchan and Kartik Aaryan can also be spotted in the video. As the actor is standing in a queue, a fans from the crowd can be heard screaming, ‘Ranbir, I love you’. The actor did not ignore his fan’s love. In fact, what he does next has floored everyone. The actor, looking cool in a pink jersey and white shorts, turns around, looks over to the stands, smiles at his fans and winks. The fans couldn’t contain their happiness and immediately break into loud cheer.

Look at Ranbir Kapoor winking at the fan:

Another video from the match has gone viral where Ranbir interacts with his fans. He goes to the fans and takes selfies in their phones. In the background a fan can be heard saying, ‘Oh my god’.

In an interview with Bollywood Hungama, Ranbir Kapoor said, “We are really happy to be here. This also happens to be ASFC’s 10th anniversary. This is probably the most, one of the most important things that I have been a part of. The kind of friends I made, the kind of teammates, the brotherhood we have had.” However, Abhishek interrupts and teases him saying, “Which is so touching considering he just got married.”

Ranbir Kapoor will soon be seen in Brahmastra with his wife Alia Bhatt. The two got married on April 14 in an intimate wedding ceremony attended by their family and friend.