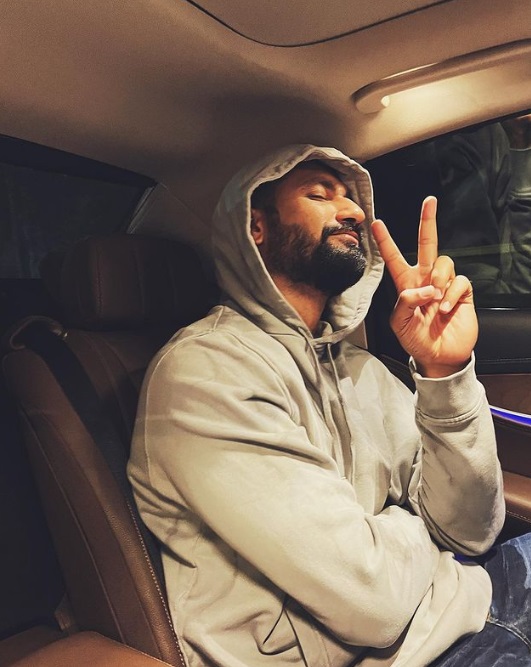 Bollywood star Vicky Kaushal may share few posts on his social media handles but when he does, it becomes a matter of joy for his fans. Just like this new photo he shared on Instagram as he wrapped a schedule of his film on Saturday morning and in no time his fans made it viral.

In the adorable photo, Vicky is sitting in his car, gesturing victory sign with his eyes closed. The Sardhar Udham actor is wearing a fawn colour hoodie with jeans. His smile, as fans say, made everyone’s day.

This photo has a reason. In Vicky’s words, “Wrapped a schedule working with some of the loveliest people… Thodi khushi, thodi thakaan aur bohot saara satisfaction. Mazze!!!”

Neha Dhupia was the first one to comment on the photo. She wrote, “Comp!” with a heart emoticon. Punjabi star Ammy Virk too left a comment that said, “Ok ji” and a heart emoji to complete it.

Even his fans flooded the post with many hearts, love-struck smileys, fire emoticons and many a comment. One fan wrote, “Haye…Subhe subhe itni pyaari smile dekh le din bann gaya mera toh.” A comment reads, “This is the Josh.” Yet another fan requested, “Sir plz post something with kat….”

Vicky Kaushal has a couple of projects in the pipeline. There is Govinda Naam Mera with Kiara Advani and Bhumi Pednekar. He has The Great Indian Family, an untitled film with Sara Ali Khan by Laxman Utekar. He will also be seen in Sam Bahadur, which also features Fatima Sana Shaikh and Sanya Malhotra. Last year, Vicky Kaushal also bagged a Karan Johar Production’s romantic comedy opposite Tripti Dimri. The film will be direct by Anand Tiwari and also feature Ammy Virk.