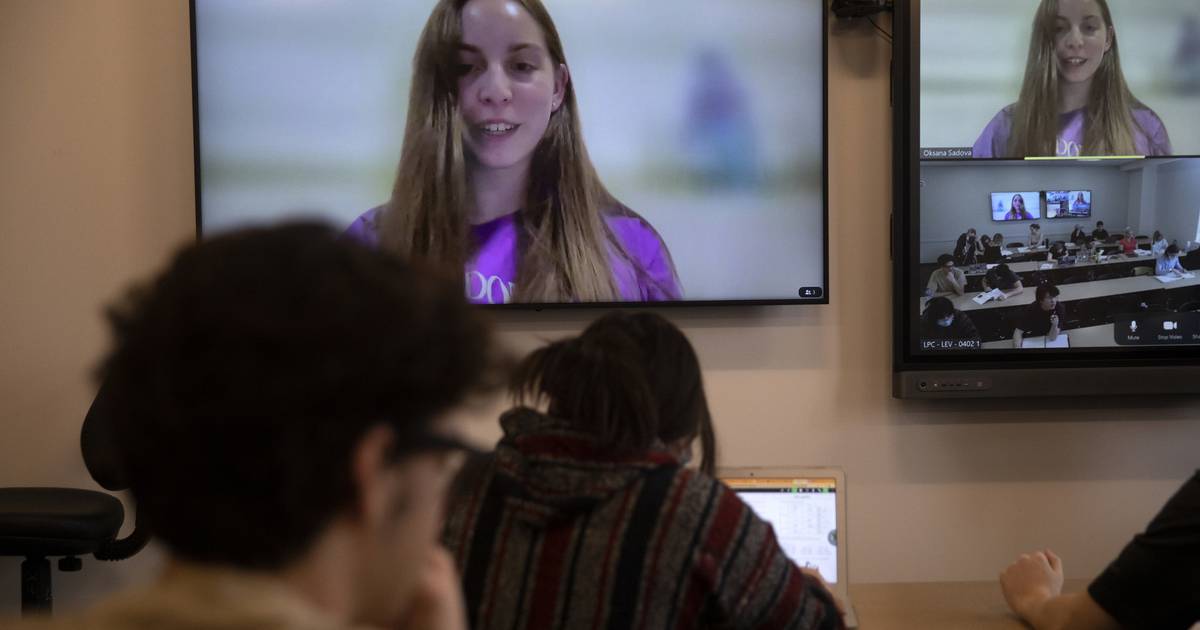 After the Russian attack upended the daily lives of millions of Ukrainians, including college students, DePaul University partnered with Ukrainian Catholic University and other higher education institutions in the region to enroll more than 100 Ukrainian college students in the Chicago university’s online courses this spring quarter.

May 6: When Russian missiles struck several power plants in Lviv, Ukraine, earlier this week, college student Marta Haiduchok aimed her cellphone camera out the window of her family’s apartment as the evening sky was enveloped with smoke.

“There were a lot of explosions, and some were not far away from my house, so we heard those clearly and saw fires,” said Haiduchok, 20, a student at Ukrainian Catholic University in Lviv, and one of more than 100 Ukrainian college students who are Zooming into online classes at DePaul this month.

“My mom and sister were outside, so they saw rockets in the sky and ran to the basement immediately,” Haiduchok, said.

“I was in my DePaul class … as soon as I heard the explosions outside, I left the Zoom meeting and went to the basement as well,” Haiduchok said.

While the missile strikes in Lviv knocked out electricity in some areas, on Wednesday night, Haiduchok said power had been mostly restored.

“We are all fine, just shocked and scared,” Haiduchok said. “My sister felt super bad, she is only 12, so she cried a lot in the basement, but everything seems to be calmer,” she said.

College student Sofiia Kekukh, 18, a student at the National University of Kyiv-Mohyla Academy, who is also enrolled in online classes at DePaul, recently completed a video project that captures a slice of life during wartime in this hauntingly beautiful city in western Ukraine, around 30 miles from Poland.

The video opens with Kekukh standing in one of the city’s historic squares, smiling behind oversized sunglasses and proclaiming: “Hey everyone! Today I’m going to show you Lviv, and you can hear all of the sounds of this wonderful city, so let’s enjoy it together.”

The video fades out to the sound of air sirens.

April 29: College student Marta Haiduchok was grateful for the silence as she walked from her apartment in Lviv, Ukraine, to meet up with classmates at the Ukrainian Catholic University library.

“It gave me so much joy. … I was super scared to go there, because I had anxiety based on the idea that the air siren will catch me while I would be on my way,” said Haiduchok, one of 100 Ukrainian students enrolled in DePaul University’s virtual classrooms.

“But the university has shelters so everything was fine and I came back home before the siren,” Haiduchok said via text messages to the Chicago Tribune.

But Haiduchok’s reprieve from the Russian invasion and devastating war was fleeting, and by 8 p.m. last Thursday Ukrainian time, the air raid sirens in Lviv were wailing and Haiduchok was behind a laptop in a corridor of her family’s apartment in western Ukraine, about 40 miles from Poland.

“It is safer behind two walls,” Haiduchok said, adding: “I’m in the class right now, and don’t want to miss it.”

Sofiia Kekukh, 18, a student at the National University of Kyiv-Mohyla Academy, who is also enrolled in online classes at DePaul, said via text messages with the Tribune that last weekend was her “first Easter without my parents.”

“I strongly believe in my nation, in our people. This brings me hope and a little bit of peace,” said Kekukh, who is studying from temporary housing at an apartment in Lviv, where she arrived recently after she and her parents abruptly left their home in Kyiv, the capital of Ukraine, in February.

“It’s difficult to talk about joy right now. My parents, grandparents, relatives, boyfriend and friends are alive and safe. It’s (what is) most important for me,” Kekukh said. “My flat isn’t damaged and destroyed. I’m glad about it. We celebrated Easter a little. It was dangerous to go by transport to another region because of possible provocations and danger.”

Dmytro Sherengovsky, Ukrainian Catholic University’s vice-rector for academic affairs and internationalization, said recently via a FaceTime interview with the Tribune that following nearly two years of online instruction, the winter quarter at the university began in person, but was upended by the Russian invasion in February.

“We lost about a week, but we quickly decided to take a service learning approach, teaching our students how to do practical things while serving the community,” Sherengovsky said.

“In our case, we asked, ‘what can we do to help?’ So our students are doing volunteer work, like providing psychological help, sheltering and helping people with disabilities,” Sherengovsky said, describing a few of the hands-on student projects taking place across Lviv.

While the university’s 2,100 students were also able to continue their programs through online courses at the university, Sherengovsky said the service learning projects are likely to provide students with experiences that will prove more valuable than traditional lessons learned in the classroom.

And then, suddenly, the FaceTime chat with Sherengovsky was halted by a keening sound bursting from his smartphone.

“The alarms are going off, I need to go to shelter,” Sherengovsky said, before adding: “It means they’ve sighted missiles, but I can still probably talk for eight more minutes.”

“I’m not scared, but I was scared during the first days,” Sherengovsky said. “Then your psychology adjusts a little bit, and while it’s definitely not typical, after a number of them, it is a routine.”

April 14: When the air raid sirens began wailing at 4 a.m. in Lviv, Ukraine, college student Marta Haiduchok began her day seeking shelter in the basement of her apartment building.

More than 12 hours later, Haiduchok, 20, was Zooming in to her online classes at DePaul University, where she is one of 100 Ukrainian students learning alongside their American classmates in the Chicago university’s virtual classrooms.

“When the war first started I was super anxious all of the time, and it was hard to concentrate. But in my case, I’m putting so much into my education, my studies are helping me do my best to forget everything that’s going on,” Haiduchok said via a FaceTime interview with the Tribune from her home in Lviv, located in western Ukraine about 40 miles from Poland.

After learning many Ukrainian students and their families were displaced from their homes, and universities across the country were operating at reduced capacity, DePaul reached out to professors who were scheduled to teach online courses for the spring quarter, asking for volunteers interested in welcoming Ukrainian students to Zoom in to their virtual classrooms.

Given the eight-hour time difference with Chicago, Ukrainian students were invited to enroll in online courses offered early in the day to allow for synchronized instruction as much as possible, Besana said.

“War is no longer an abstract concept for our DePaul students, because now, they know classmates like Marta and Sofiia, which is really powerful,” Besana said.