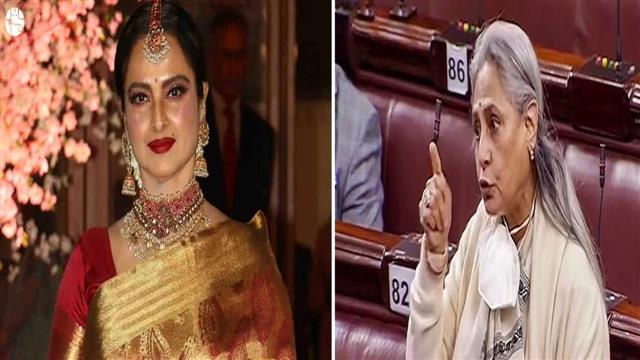 Two days back, an agitated SP MP Jaya Bachchan, cursed the BJP with ‘bad days’ after objecting to ‘personal’ remarks in the Rajya Sabha.

She lashed out at the ruling BJP in the Rajya Sabha with a “curse” that it would face bad days.

Ever since, Jaya Bachchan has been trending on social media, so is Rekha. Rekha by default makes it to headlines when it comes to Jaya.

Twitter users have suggested the BJP to get Rekha to Rajya Sabha to ward off Jaya Bachchan’s curse.

Dear #BJP
Don’t give any reply to #JayaBachchan .
Just give Rajya Sabha seat to Rekha .🙃

I Think Modiji should invite Rekha to Join BJP!
😉 pic.twitter.com/9Xw6UmjMNq

Both Jaya Bachchan and Rekha Are trending.
Let’s see who you support.
RT for #JayaBachchan
Like for #Rekha ☺️😊 pic.twitter.com/WPSi1U8i4P

They are of the view that Jaya Bachchan would not go to Rajya Sabha if Rekha is brought in there.

Bachchan’s outburst came on the day her daughter-in-law and actor Aishwarya Rai Bachchan appeared before the Enforcement Directorate for questioning in a case linked to the 2016 ‘Panama Papers’ global tax leaks case.

& why she cursed #BJP