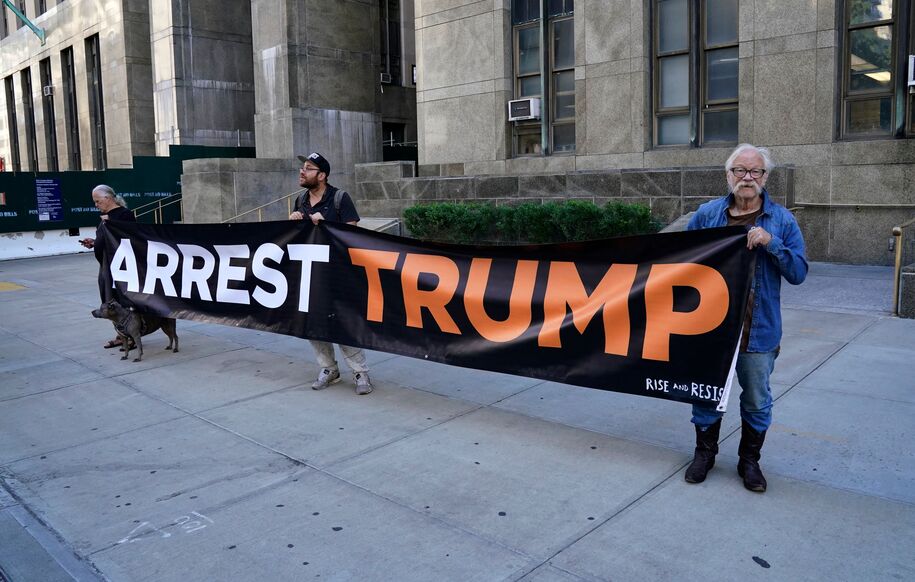 Hewitt quickly seized on Trump’s threats of violence, not a means of questioning Trump’s motivations, but as a means of attacking what the talk radio host (a role that goes back to the 1920s) described as “legacy media.” What if, asked Hewitt, that legacy media said Trump was inciting violence? Just because he was delivering exactly the same kind of threats, using the same kind of language, that he employed before Jan. 6?

Trump insisted he wasn’t “inciting,” but only delivering his opinion. That opinion being, “I don’t think the people of this country would stand for it.”

So, not a threat. In the same way any statement that boils down to “if you do this, I think you’ll regret it” is not a threat. Just an opinion.

In his interview with Hewitt, Trump also denied any involvement in the scheme to create a slate of false electors in Georgia and elsewhere—a scheme that’s under investigation at both the federal and state level. While lying about his involvement in the plot, Trump also insisted that such a move was “very common” though he gave no other examples.

Throughout the interview, Trump insisted that he had “done nothing wrong” because everything at Mar-a-Lago had been “declassified.” However, he provided no details of how this could be accomplished for documents whose information contains serious threats to national security. Notably, despite how many times Trump has said this, his attorneys have not made this claim in court.

Of course, all of this coincidently falls perfectly in line with Hewitt’s latest (and I can’t believe this is still happening) Washington Post column in which he declares that all concern over Trump’s theft of classified documents is a “diversion” that has “run out of gas.” Hewitt declares that Democrats “have probably seen their high-water mark on the polls.” And that voters will “swing back to the GOP” just as soon as voters realize that “the Dobbs decision did not end abortion in America.”

It just, you know, gave that authority to Republicans—who are ending abortion in America.

This cornucopia of insight brought to you by the same man who once declared that the invasion of Iraq would be seen as “one of the wisest decisions ever made,” and declared himself one of the “staunchest defenders” of former EPA administrator Scott Pruitt even as the coal lobbyists slunk away while facing an even dozen different ethics violations. Hewitt also called on the RNC to disenfranchise Trump as the GOP candidate a week before he did a 180 and declared himself for Trump.

But these days, Hewitt, like the rest of Republicans, has learned his place—which is to insist that breaking every law in the books is no big deal. So long as it’s Donald Trump doing the breaking.

While Republicans try to overturn elections and make it harder to vote, volunteer to help save democracy by encouraging people to cast their ballots. Click here to view hundreds of local and national Get Out the Vote opportunities on the Daily Kos Mobilize feed, and sign up to volunteer on a national campaign or one near you.