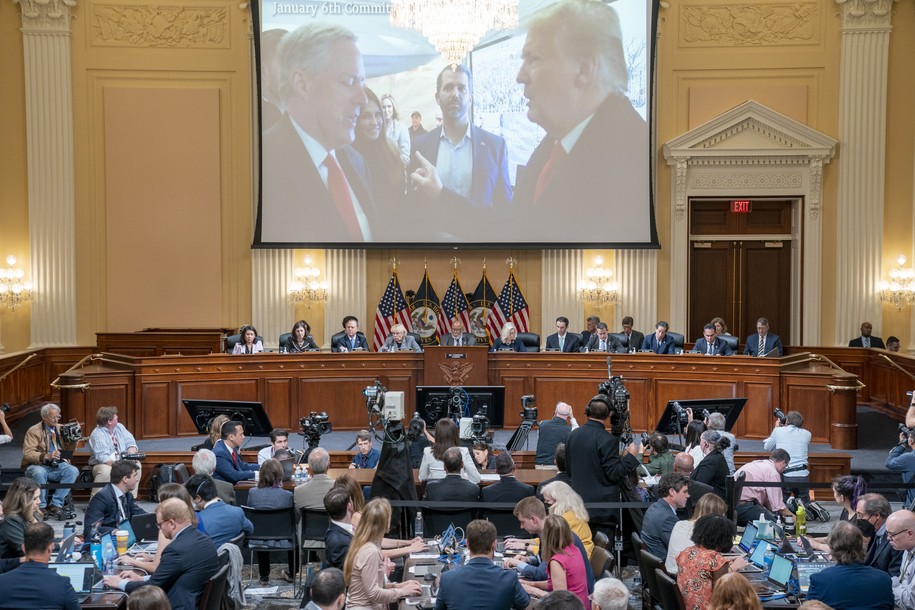 Important to note, however, is that this recent bout of cooperation has apparently not precluded Meadows from keeping close to Trump or doing his bidding. He’s currently joined a lawsuit with former Trump adviser Stephen Miller targeting county officials in Pennsylvania over the use of ballot drop boxes. They, and the America First Legal Foundation, are citing issues with vote integrity in the state.

How much Meadows truly understands about the integrity of elections is up for earnest debate. The North Carolina State Bureau of Investigations is still probing whether Meadows acted unlawfully when he used the address of a mobile home he reportedly does not live in to vote absentee in the 2020 election. A spokesperson from the state’s bureau of investigation told North Carolina news outlet The Citizen-Times this week that as of Sept. 14, the investigation into Meadows’ voter registration continues.

The Justice Department’s probe of Jan. 6 has continued apace.

Several former high-ranking Trump White House officials have complied with subpoenas for grand jury testimony, including former White House counsel Pat Cipollone and his deputy, Patrick Philbin. Members of former Vice President Mike Pence’s staff have also testified before a grand jury investigating Jan. 6, like Pence’s onetime Chief of Staff Marc Short. Short provided the Jan. 6 committee with key details about the pressure Pence faced as Trump and a cadre of his attorneys and advisers pushed to stop the certification of the 2020 election by Congress.

But that’s not all: The department has also doled out some 40 subpoenas to a mass of Trump White House insiders in the last week.

Trump’s Save America political action committee (PAC) is getting attention, too. A grand jury issued several subpoenas tied to the former president’s fundraising efforts. Reportedly, investigators are seeking clarity around how the PAC was formed and how funds flowed in and out or were otherwise spent. The PAC, according to the Jan. 6 committee, may have raised funds or handled its donor cash fraudulently. Dubbing it the Big Rip-Off, investigators say that Trump premised collections from donors on the bald lie that the 2020 election was stolen from him and did so in a seemingly endless number of email blasts and text messages, flyers, and tweets. Trump and his campaign would seek these donations for what he dubbed his “legal defense.”

But important questions abound over the propriety of the PAC.

As ABC News reported first, public records show that the Save America PAC was established just days after the 2020 election and in conjunction with the pro-Trump fundraising group, the Trump Make America Great Committee, and the Republican National Committee.

From the ABC report:

Similar to regular political action committees, leadership PACs can only accept up to $5,000 per donor, far less than the upwards of $800,000 donations that the Trump campaign and the Republican Party’s high-dollar joint fundraising committee, Trump Victory, had previously raised.

Public disclosures show that the Save America PAC has raked in over $130 million and that includes transfers from “affiliated committees.”

As for Meadows: His cooperation in several facets of the department’s Jan. 6 investigation could prove deeply valuable.

Meadows not only had a front-row seat in the Trump White House in the runup to Jan. 6, but he was also an active and key intermediary. Already public text messages have shown Meadows fielding demands, concerns, and questions from a large pool of Trump’s allies and aides about attempts to overturn the election or advance fake electors.

Meadows also trafficked in baseless conspiracy theories about voter fraud, including the theory that Italy used satellites to rig voting machines against Trump. Meadows even went so far as to ask the Justice Department to investigate voter fraud in Georgia and other states despite widespread and credible intelligence that no such fraud had occurred.

During the select committee’s public hearings, a former aide to Meadows, Cassidy Hutchinson, offered chilling testimony about his behavior before and on Jan. 6. Hutchinson testified under oath that Meadows warned her “things might get real, real bad” on Jan. 2 after he met with Trump’s personal attorney, Rudy Giuliani.

This remark came literal minutes, Hutchinson said, after Giuliani told her: “We are going to the Capitol. It’s going to be great, the president is going to be there and he’s going to look powerful.”

Hutchison was told that things on January 6 might get “real bad.” pic.twitter.com/401ThSJNWv