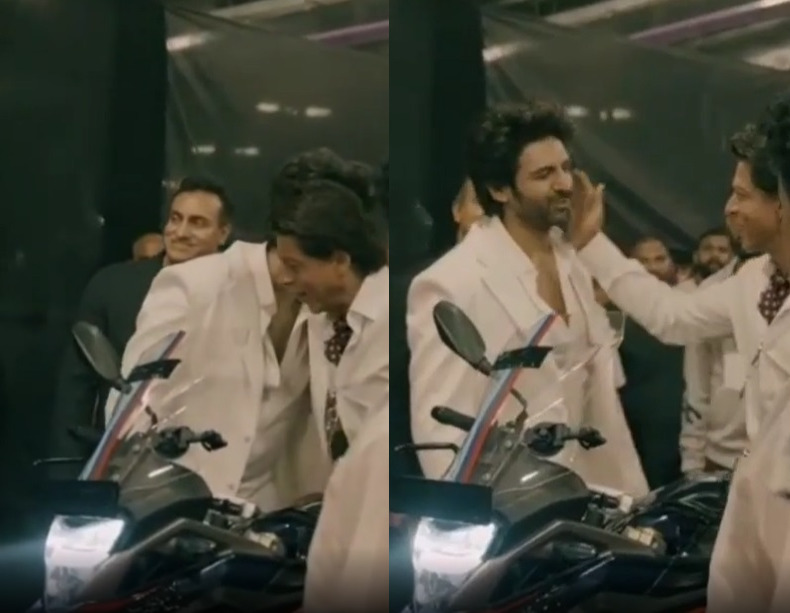 Kartik Aaryan has often confessed that he is a huge Shah Rukh Khan fan. So, when the two actors recently met at an event, we could see the shine in Kartik’s eyes, thanks to the viral videos on social media. In the video, Kartik had a heart-to-heart conversation with SRK. He whispered something in Shah Rukh’s ear after which the latter smiled and touched Kartik’s cheek lovingly. The video ends with the two smiling at each other.

Now, Kartik Aaryan opened up about his conversation with the King Khan. In an interview with Bollywood Hungama, Kartik told that he asked Shah Rukh whether he has watched his latest hit Bhool Bhulaiyaa 2. To this, the Badshah of Bollywood replied, “Dekhi beta bohot accha hai tu usme.”

The clip had gone viral and SRK’s loving gesture towards Kartik won the hearts of his fans who call him heartwarming, humble and kind. SRK and Kartik fans are touched by the video and have expressed their love for the actors in the comments section.

According to a News 18 report, in one of his interviews, Kartik shared that he is SRK’s fan and also recalled his meeting with the superstar. He had shared that he used to stand outside SRK’s home Mannat when he first came to Mumbai.

Work wise, both Shah Rukh Khan and Kartik have a slew of projects in the pipeline. Shah Rukh has three movies including Pathaan, Jawan and Dunki to be released next year. Kartik on the other hand will next be seen Shehzada with Kriti Sanon. He also has Freddy, Captain India and an untitled project by Nadiadwala.