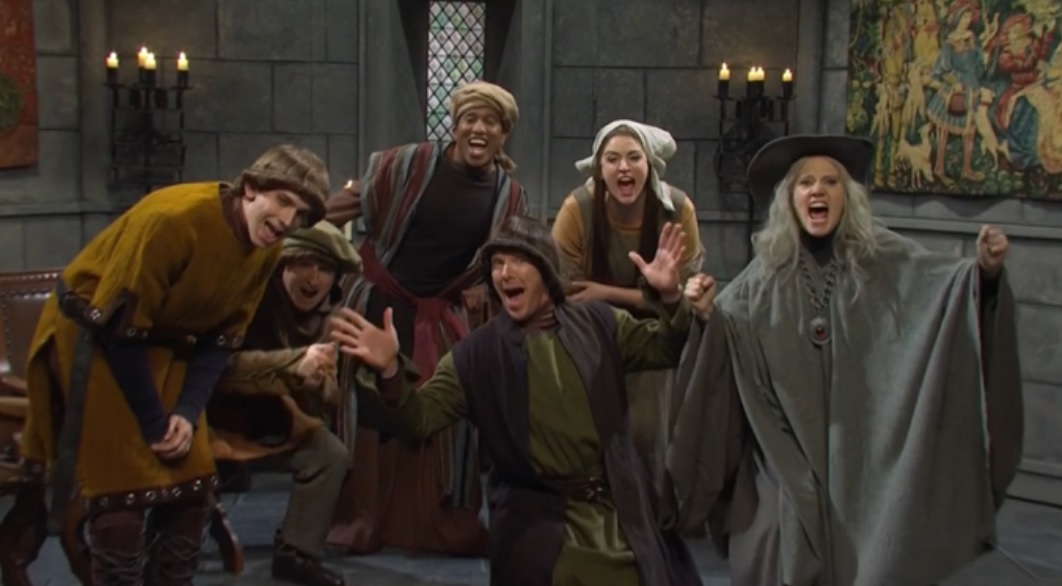 The sketch opened with a voice-over and text scroll that made reference to Alito’s citation of a 17th century British law as a justification for curbing rights protected for a half-century by the landmark 1973 Roe v. Wade decision.

In the cold open, Cumberbatch told his friends, set in 13th Century England, that earlier, a genius thought occurred to him about abortion: “Don’t you think we ought to make a law against it?” His friends’ replies: “You mean like the law we have against pointy shoes?”

“We should make a law,” says Cumberbatch, “that will stand the test of time so that hundreds and hundreds of years from now, they’ll say, no need to update this at all, they nailed it in 1235.”

Cumberbatch was confronted by a woman played by Cecily Strong, who questioned why men should have such control over women’s bodies given the high rate of mortality in childbirth for mother and child in those days.

“Shouldn’t women have the right to choose, since having a baby means a 50 percent chance of dying?” Strong’s character asked.

“That’s why we’re also offering maternity leave,” Cumberbatch said. “When you’re done with 20 years of continuous maternity, you can leave.”

“Shouldn’t we at least make exceptions in cases of rape or incest?” Andrew Dismukes character asked, with a quick reply from James Austin Johnson, saying, “but those are the only kinds of sex.”

Strong asked the men why they care about this issue so much, instead of focusing on the fact that most of the people in the town can’t read or write, or that everyone’s dying from an ongoing plague.

“Oh, you think just ’cause I have active plague, I need to wear a mask?” Dismukes asked, adding, “it’s my body, my choice.”

Kate McKinnon also made an appearance as a witch who came in with dark predictions of the future. She introduced herself as not a magical character, but “just a woman in her 30s.”

“These barbaric laws will some day be overtuned by something called progress,” she said. “Maybe 50 years after the progress, they’ll be like, ‘Maybe we should undo the progress.’ “

McKinnon’s character also stated that in the future, “It seems like all the power comes from a place called Florida” and she nodded to the strangeness of the Johnny Depp-Amber Heard trial that has been making worldwide headlines.

During news segment “Weekend Update,” co-hosts Colin Jost and Michael Che spent most of their time discussing the leak of the Supreme Court draft opinion.

“Well, guys, tomorrow is Mother’s Day, whether you want it to be one or not,” Jost joked up top, noting that the leak was “unprecedented” and could cause “lasting damage” to the Supreme Court.

“So, the court is usually careful, but they slipped up just this once, and now they’ve got to live with it forever,” he deadpanned. “Wow, sounds really unfair.”

Jost then said that the Supreme Court opinion was written by Justice Alito, who based his arguments on laws from the 1600s. “So, it’s an outdated opinion from an angry 70-year-old?” he asked. “This shouldn’t be a Supreme Court decision; it should just be a Facebook post.”

Che then took over the conversation, noting that as a man, there’s no way he can understand the full impact of Roe v. Wade being overturned.

What Che does mention is that the ruling will have a “disproportionate effect” on poor people. “I mean, most Americans don’t have access to the same resources that I do,” he said. “The average person can’t just text Lorne [Michaels] in the middle of the night and say, ‘Yo, it happened again.’”

Che also asks why Republicans are “so against” abortion. “I mean, maybe don’t think of it as an abortion,” he joked. “Think of it as a patriot storming the uterus to overturn the results of an unfair pregnancy.”

Later on during the news segment, the anchors invited Supreme Court Justice Amy Coney Barrett, played by McKinnon, to the desk to get her thoughts on the situation.

When Jost suggested that she seemed happy about it, she said, “I don’t know what would make you think that, other than everything I’ve ever said.”

Cumberbatch made his second appearance as host of the variety show, alluding in his opening monologue to his new film “Doctor Strange in the Multiverse of Madness,” which hit theaters in the U.S. on Friday.

“I am thrilled to be back hosting ‘Saturday Night Live.’ It’s been a really fun, great week. I’ve got to be honest though, because most of the sketch writers this week, they pitched me sketches everyday, and most were about ‘Doctor Strange,’” said Cumberbatch up top.

“It’s great. I love the guy. I love playing the character. The film’s doing really well, but I have been in other films.”

Cumberbatch joked that he went so far as to express this to Lorne Michaels, with Michaels responding, “Like what?”

Cumberbatch pivoted to discuss his excitement at being able to host the Mother’s Day show. “Of course, I want to wish a very happy Mother’s Day to my mum,” he said. “She’s actually on holiday in Greece at the moment and ‘SNL’ offered to fly her here first-class, and she said, ‘No, I’m on a beach in Greece. Are you insane?’”

In a wholesome Mother’s Day sketch, a mother, father and grandmother, played by Strong, Cumberbatch, and McKinnon, respectively, have flashbacks as reckless teens while trying to discipline their child played by Chloe Fineman.