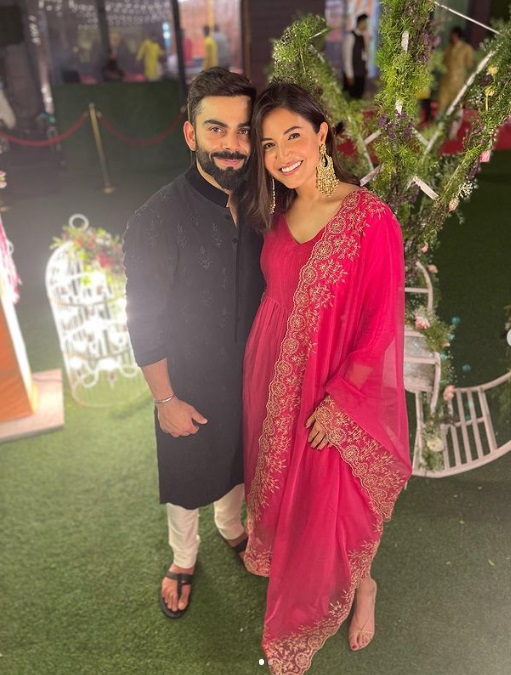 Bollywood actress Anushka Sharma has impressed her fans and Instafams with latest pictures of herself and husband Virat Kohli. Dressed in Indian wear, the couple looks simple yet classy. The pictures are from Virat’s Royal Challengers Bangalore teammate Glen Maxwell’s wedding festivities, which they attended in a bio-secure-bubble on Wednesday.

Anushka chose a pink salwar-kameez with golden embroidery while Virat picked a black kurta with self-print and off-white pyjama.

Glenn recently tied the knot with Vini Raman in Australia and the team decided to host a reception for the newlyweds during the ongoing IPL in Mumbai.

The actress captioned it, “Wedding function in a bubble! Now I think I’ve seen and celebrated possibly every function and festival in a bubble.” She added hashtag BubbleLife.

Fans are impressed with their simplicity and choice of attire for the wedding function. A fan commented, “You guys are rocking in traditionals.” Another fan wrote, “You two keep it real always.” A fan said, “Love how simply you have chosen to dress .”

The post has many comments of love and admiration for the couple.

Glen Maxwell and Vini got married in a Christian ceremony followed by a Hindu wedding in Australia in March.

Meanwhile, Anushka will next be seen as a cricketer in Chakda Xpress, a real life story inspired by Indian cricketer Jhulan Goswami’s life and journey.