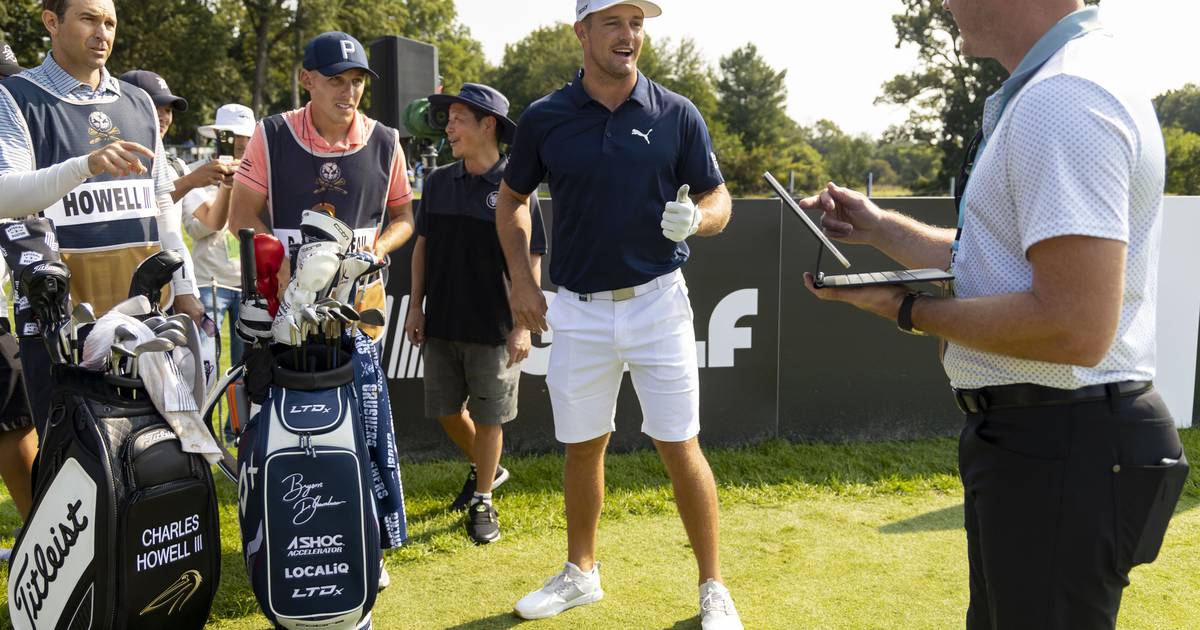 Thursday’s media session at the LIV Golf Invitational Series at Rich Harvest Farms made it abundantly clear the event will not be a typical professional golf tournament.

Loud techno music thumped across the course as golfers such as Phil Mickelson and Sergio Garcia got in their swings during a pro-am. Many wore shorts, something they can keep doing when play starts for real Friday.

And over everything hung the continuing controversy generated by the tour’s main financial backer — the sovereign wealth fund of Saudi Arabia, whose regime has been accused of a multitude of human rights abuses.

Illinois Sen. Dick Durbin added to the criticism Thursday, tweeting: “This weekend, a golf glove will try and cover a bloodstained hand as the LIV golf tournament comes to Chicago in the Saudi government’s continued, desperate attempt to clean up its image.”

This weekend, a golf glove will try and cover a blood-stained hand as the LIV golf tournament comes to Chicago in the Saudi government’s continued, desperate attempt to clean up its image. https://t.co/vEAXn2Facd

But such condemnation barely registered at Rich Harvest Farms, a private course hemmed in by cornfields 45 miles west of Chicago.

Course officials said they had not heard of any planned protests, while the golf media, which had peppered players with questions about Saudi Arabia in the early days of the series, moved on to other topics.

Responding to the sole question about “sportswashing,” the practice of buffing a nation state’s reputation by associating with a beloved game, Indian golfer Anirban Lahiri took a pass.

“We are all just here to play golf,” he said. “I’m not going to comment on anything political. Everyone is obviously entitled to their opinion. I have mine, but I don’t think it’s relevant.”

“There’s a lot of good things going on,” added Joaquin Niemann, who is from Chile. “I’m also here to give a good performance on the golf course and see how we can grow the game in a good way.”

LIV spokesman Jonathan Grella said: “We continue to believe that sports have the power to bring change and bring people together. We appreciate and respect that not everyone will agree, but we believe that golf is a force for good.”

The series is reportedly splashing nine-figure guarantees on some superstar golfers along with $25 million prize pools at each stop. Series money leader Dustin Johnson has so far won nearly $10 million in just four events.

The lavish spending and promises of approaching golf in new ways has lured many top pros despite criticism inside and outside the sport.

Human rights advocates say the Saudi regime is responsible for mass executions and the oppression of women, LGBT people and dissidents, along with war crimes committed during its military conflict in neighboring Yemen.

PGA Commissioner Jay Monahan, meanwhile, has suspended defectors to the LIV tour, barring them from marquee events while saying the U.S.-based PGA “can’t compete with a foreign monarchy that is spending billions of dollars in an attempt to buy the game of golf.”

Rich Harvest Farms has tried to focus on the positive, saying the series offers the chance to bring professional golf to the frequently overlooked Chicago area, and will raise money for charities such as the Kids Golf Foundation of Illinois, a caddie scholarship program and relief for Ukrainian refugees.

Protesters, including families of some killed during the 9/11 attacks, have shown up at several stops since the series’ first event in England, but it remained unclear Thursday if anyone will venture to Sugar Grove to show their discontent.

Asked about the expected crowd, Grella said LIV does not release specific figures. Some Chicago area golf fans told the Tribune earlier this year that the Saudi connection will prompt them to stay home, while others, citing the host of moral compromises throughout the sports world, said they are unbothered and plan to come.

In another departure from golf tradition, Friday’s session will be capped by a performance from electronic musicians St. Lucia, while Saturday’s will feature a concert from pop star Jason Derulo.

The golf itself will be unusual too. The LIV series features shotgun starts, meaning all 48 golfers will be on the course at once, and no one will be cut during the three-day event.

The golfers have also been divided into four-man teams with names such as Hyflyers and Aces, which come with signature colors and logos. The winning team will split $3 million, while the top individual will claim $4 million.

David Puig, a top college golfer from Spain who will make his pro debut Friday with the LIV tour, said he appreciates the white glove treatment.

“All the stuff they have is really amazing,” he said. “Obviously, when you come from the amateur world … you’ve got to book your flights and book your hotel reservations, call to the pro shop to book a tee time. Here in LIV, they take care of you really good, which is awesome.”

American golfer Bryson DeChambeau, the 2020 U.S. Open champion who is among a group of LIV players suing the PGA over their expulsion, said the innovations could appeal to a younger generation of golf fans.

And despite LIV founder Greg Norman telling an interviewer this week that he has no interest in reaching a truce with the PGA, DeChambeau said he can envision the tours coexisting.

“I would love nothing more than that,” he said. “It’d be fun to do what football is doing — the AFC, NFC, coming to the Super Bowl, that sort of thing. We can potentially do that.”