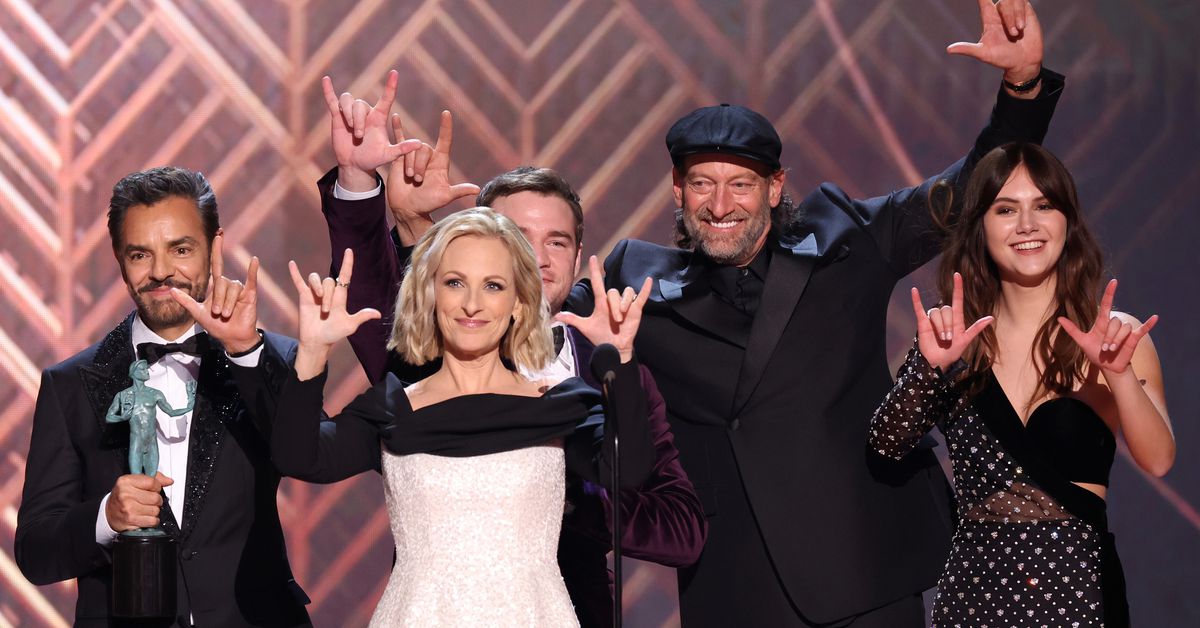 In an upset, the deaf family drama “CODA” took top honors at a very unpredictable 28th Screen Actors Guild Awards that also saw wins for the leads of “Squid Game,” the cast of “Ted Lasso” and Will Smith.

“This validates the fact that we, deaf actors, can work just like anybody else. We look forward to more opportunities for deaf actors,” signed Marlee Matlin on stage before teaching the crowd sign language for “I love you.”

Matlin is the only deaf actor to win an Oscar, but her “CODA” co-star, Troy Kotsur, may be in line to join her. Kotsur won best supporting actor Sunday, becoming the first deaf actor win an individual SAG award. The 53-year-old veteran actor plunged his head into his hands when his name was read. On stage, he thanked his wife for “reminding me to check my fly before walking the red carpet.”

“I have sat many a times watching you on the big screen dreaming of one day becoming an actor,” Jung told the crowd, fighting back tears.

Still, HBO’s “Succession” ultimately reigned in the best drama series category. Cox fittingly accepted the award with an expletive printed on his face mask, and another uttered as he struggled to take it off. But Cox turned serious when discussing Russia’s invasion of Ukraine. In the evening’s bluntest remarks on the invasion, he noted that the president of Ukraine, Volodymyr Zelenskyy, was a comic. He urged censored dissenters in Russia to speak out.

“The people in Russia who don’t like what’s going on — and particularly the artists — I think we should join and celebrate them and hope that they can make a shift, as I believe they can,” said Cox while the audience stood and applauded.

The SAG Awards are considered one of the most reliable predictors of the Academy Awards — actors make up the largest percentage of the Academy of Motion Pictures Arts and Sciences. Their picks often align — in 2020, when the cast of “Parasite” and Brad Pitt won, they matched exactly.

And that may mean Will Smith, star of the Williams family tennis drama “King Richard,” is heading for his first Oscar. Smith won for best actor.

“That may have been one of the greatest moments of my career just now because my name was called for ‘King Richard’ sitting next to Venus Williams,” said Smith.

Kotsur’s win suggested he may have emerged as the Oscar favorite over the competition, notably Kodi Smit-McPhee of “The Power of the Dog.” Meanwhile, Ariana DeBose of “West Side Story” confirmed her frontrunner status with a win Sunday for best supporting performance by a female actor.

“It’s taken me a long time to feel comfortable calling myself an actor,” said DeBose. “My roots come from the dance world and the Broadway stage, and the Anita that we see on screen took every bit of me but she took 10 years to make.”

Best actress has been more difficult category to track. Many have seen Olivia Colman (“The Lost Daughter”) as the favorite to win her second Oscar. Often, those snubbed have drawn the focus. Kristen Stewart of “Spencer” was passed over by SAG, while Lady Gaga (“House of Gucci”) missed with the film academy.

Yet it was Jessica Chastain, who plays the infamous televangelist in “The Eyes of Tammy Faye,” who won Sunday, notching her first individual SAG award.

The SAG Awards, which will be available to stream Monday on HBO Max, are presented by the Hollywood actors guild SAG-AFTRA. After the January Golden Globes were a non-event, the Screen Actors Guild Awards were Hollywood’s first major, televised, in-person award show — complete with a red carpet and teary-eyed speeches — this year.

The “Hamilton” trio of Lin-Manuel Miranda, Leslie Odom Jr. and Daveed Diggs kicked off the broadcast with the declared theme of “together again.”

“We’ve returned to a world where all we have to do to hang out like this is get dressed up, show up, get swabbed, sanitized, screened, masked, vaccinated, boosted, rapid-tested and PCR-cleared within 24 hours,” said Odom Jr. “Now who’s ready to party?”

Some casts, citing quarantine regulations related to production schedules, appeared remotely — including the lead television nominee, “Ted Lasso.” Appearing by video link with his castmates around him, Jason Sudeikis accepted the award for best actor in a comedy series. The Apple TV+ show was later named best comedy series ensemble.

While the Academy Awards aren’t mandating vaccination for presenters (just attendees), it was required for the SAG Awards, which are voted on by the Hollywood actors’ guild SAG-AFTRA. Other awards went to Jean Smart of “Hacks,” Kate Winslet of “Mare of Easttown” and Michael Keaton of “Dopesick,” who dedicated his award to his nephew, Michael. Keaton has previously said he died from fentanyl and heroin use in 2016.

Helen Mirren, a five-time SAG winner, was honored with a lifetime achievement award.

“Honestly, any achievement that I’ve succeed in is the result of my mantra which is basically: Be on time and don’t be ass,” said the 76-year-old actor. “Thank you, thank you, S-A-G so much for this. I hate to say the word ‘sag’ at my age.”