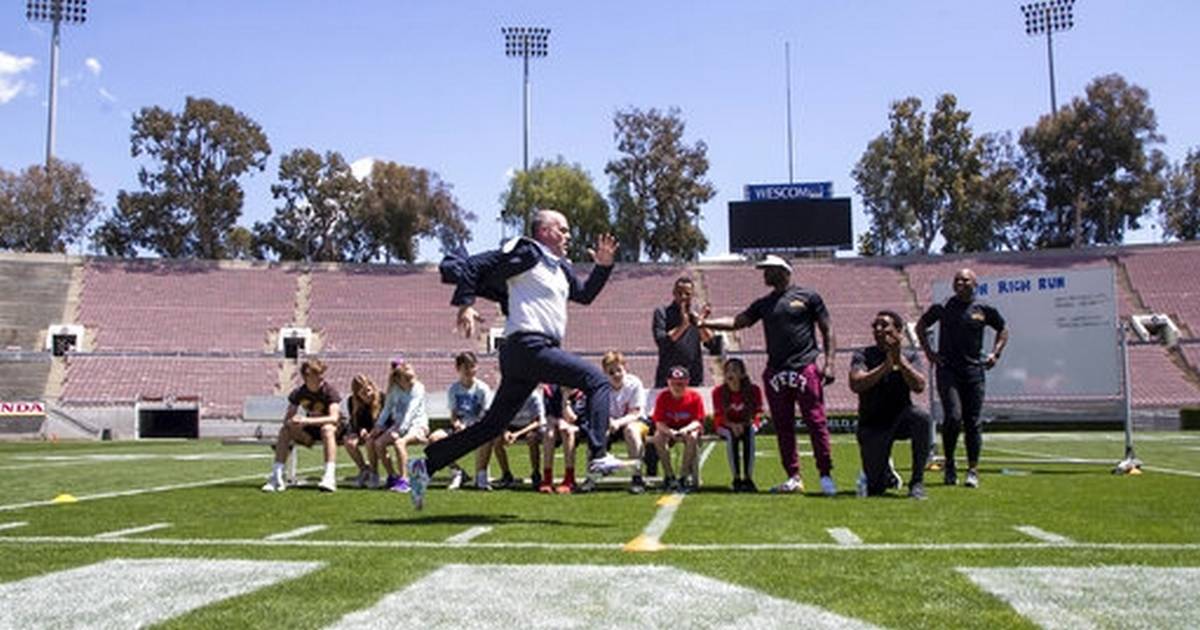 PASADENA, Calif. — What started as a dare during the NFL Scouting Combine has morphed into much more for Rich Eisen.

Last Saturday at the Rose Bowl, the NFL Network host participated in his 18th ‘Run Rich Run.’ Eisen donned his suit and tie to run the 40-yard dash at the iconic stadium, celebrating its centennial this year.

‘Run Rich Run’ will air during Saturday’s coverage of the final day of the NFL draft on NFL Network.

The Rose Bowl also has special meaning for Eisen. He covered the 1990 game as a University of Michigan student. It was Bo Schembechler’s last game as the Wolverines lost to USC.

‘I always dreamt of having a career in sports, broadcasting or television, or anything like that. I like that I’m back here in the Rose Bowl with an event like this. Words can’t describe how cool this is,’ Eisen said.

Eisen’s first dash came during a lull at the 2005 combine, when Terrell Davis thought Eisen was joking when he asked Davis how fast he thought he could run.

Eisen ran 6.77 seconds at the old RCA Dome in Indianapolis without any training and wearing wingtips in 2005. It has been his slowest time.

A photo of Eisen running the 40 was the cover of his 2008 book. A silhouette of him running in a suit and tie is the logo of his talk show.

Fans the last seven years have been encouraged to submit videos on social media of them running the 40 using the hashtag #RunRichRun or #RunYour40.

‘It has become so ingrained in everything that I do. It was a total lark (in 2005),’ Eisen said. ‘The league and network support it by asking people around the country to run in their work suit or work clothes and send videos. I’ve seen people in firefighter, hazmat suits, lab coats, high heels, business attire. It just blows me away.’

Up until 2020, Eisen’s run took place during the combine and was shown during the final day of coverage. When the COVID-19 pandemic canceled the 2021 combine, the event had to find a new venue. It also saw an opportunity to increase participation.

Last year’s event took place at SoFi Stadium before the draft. While Eisen’s dash remained the highlight, NFL legends teamed up with entrepreneurs to run. Each pair ran a 40-yard dash, with the lowest combined time being declared the winner.

Lore, a co-owner of the Minnesota Timberwolves, was the one who first came up with the idea last year of pairing legends with entrepreneurs.

‘We get an opportunity to meet people in a different light than we normally would get to meet them,’ Carter said. ‘We have a lot of good people around the league. And that’s what Rich is. A lot of this is us supporting him.’

Eisen, the legends and entrepreneurs, were also joined by Alexander, an 11-year-old St. Jude patient who served as the official timekeeper. Alexander was diagnosed in 2017 with medulloblastoma, a form of brain cancer. He was treated at St. Jude and is now cancer-free.

‘He got a call (earlier last week) to say he just got a clean scan for the first time in a long time. And he’s running, his mom is here and not worrying about anything except being here at the Rose Bowl and running around. So it’s pretty cool,’ Eisen said.

‘It looks easy, just running in a straight line. But it’s a significant physical endeavor. And certainly, as you get older, it becomes that much more difficult. But I’ll do this as long as anybody wants to watch a middle-aged man run and raise money for St. Jude.’