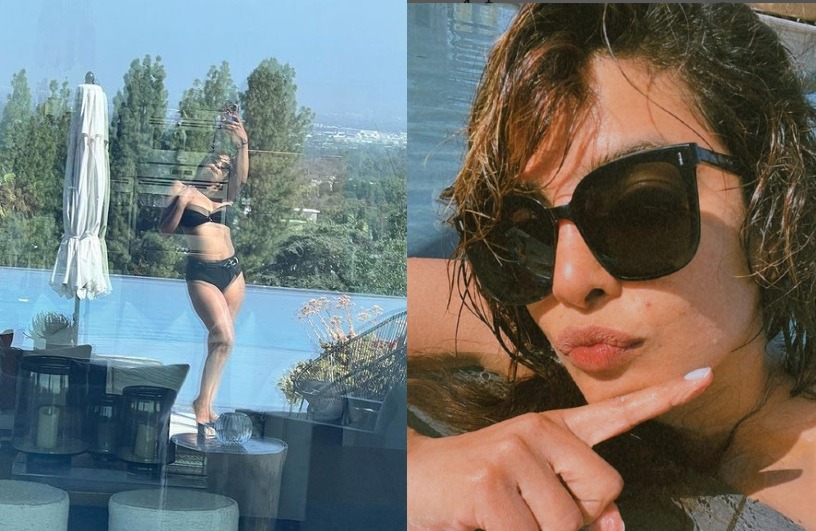 Priyanka Chopra’s self-care is the perfect way to beat the heat in this sultry weather. On Friday, the actress treated her fans to some pictures and videos from her me-time in the pool at her Los Angeles home. Dressed in a black bikini, she can be seeing vibing to some retro Hindi tracks. Calling herself a desi girl, Priyanka teased fans to the opening notes of different songs and invited them to guess the tracks.

Apart from these videos, there are selfies too. One is a close-up of her face wearing a pair of black sunglasses. The other is a mirror selfie in which she flaunts her bikini body.

She captioned the post. “When u get a few unexpected hours of self care Sound ON!! Can u recognise the songs I’m listening to? Share in comments. #90smusic #desigirl #sunshine #poolday.”

Check out the videos and selfies:

Not a surprise, many of her Indian fans were quick to guess the songs. Some fans also took to the comments section to praise the actress. A fan wrote, “This woman just doesn’t age. Skin is glowing. Pure perfection. A comment reads, “It is not how much we have, but how much we enjoy, that makes happiness.” Another fan said, “Omg those are my fav songs.”

Priyanka and her singer husband Nick in January welcomed their first child, reportedly a girl named Maltie Marie Chopra Jonas, via surrogacy. The parents have refrained from sharing any information about the child and requested for privacy. “We are overjoyed to confirm that we have welcomed a baby via surrogate. We respectfully ask for privacy during this special time as we focus on our family. Thank you so much,” they both wrote on their social media handles.