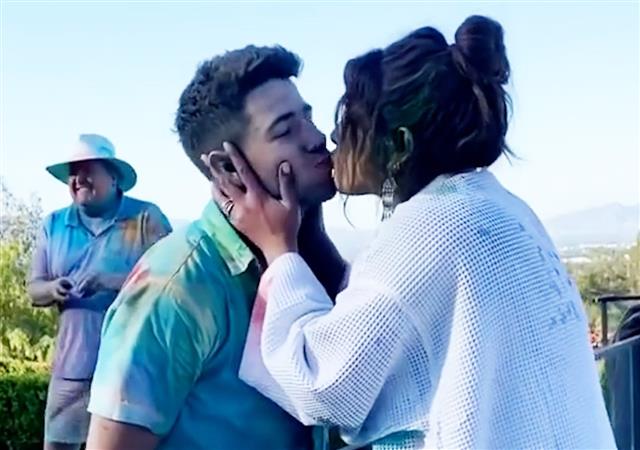 This Hoi, Priyanka Chopra and her husband Nick Jonas lived it up and how! The two made the most of the festival of colours. Their social media updates are an enticing proof. While Nick first gave a glimpse of their celebration with some photos and video, Priyanka followed suit with not one or two but so many pictures from their desi Holi bash.

Nick Jonas shared a reel with bowls of colourful popcorn, next we saw him grooving to the Holi song by Arun Dev Yadav as he munched on popcorn. Smeared in colours, Nick is happy showing us how his family enjoyed Holi to the hilt. His friends throwing water-filled balloons, everyone dancing, music, food, and Priyanka armed with water gun, their Holi was ‘Lit’.

Priyanka shared her special moments from the festival. Their home in Los Angeles was painted red by her folks. Her social update began with mush and love as the couple lip-kissed each other, jumping in a boomerang with her gang of girls, a photo of her laying on the deck by their swimming pool. A picture with kids, one with Nick and the last one in the lot is a group photo that shows how much fun the entire group had this Holi.

She captioned the post, “To be able to find some joy at a time when the world feels so scary is such a blessing. Happy Holi everyone. Thank you to our friends and family for playing Holi like desi’s do! Feeling blessed.”

In another post, Priyanka couldn’t but mention the Holi song from her movie ‘Waqt’, ‘Do me a favour let’s play Holi?’. The post has three happy pictures, one of herself, one of Nick and one of the two of them lip locking. She captioned it as “Do me a favor.. let’s play Holi. Sorry. Had to!”

The actress made sure to return home from her trip to Rome to be able to celebrate Holi with her family. This is Priyanka and Nick’s first Holi as parents. The fans were hopeful to get a glimpse of their newborn baby, whom the couple welcomed through surrogacy in January this year.