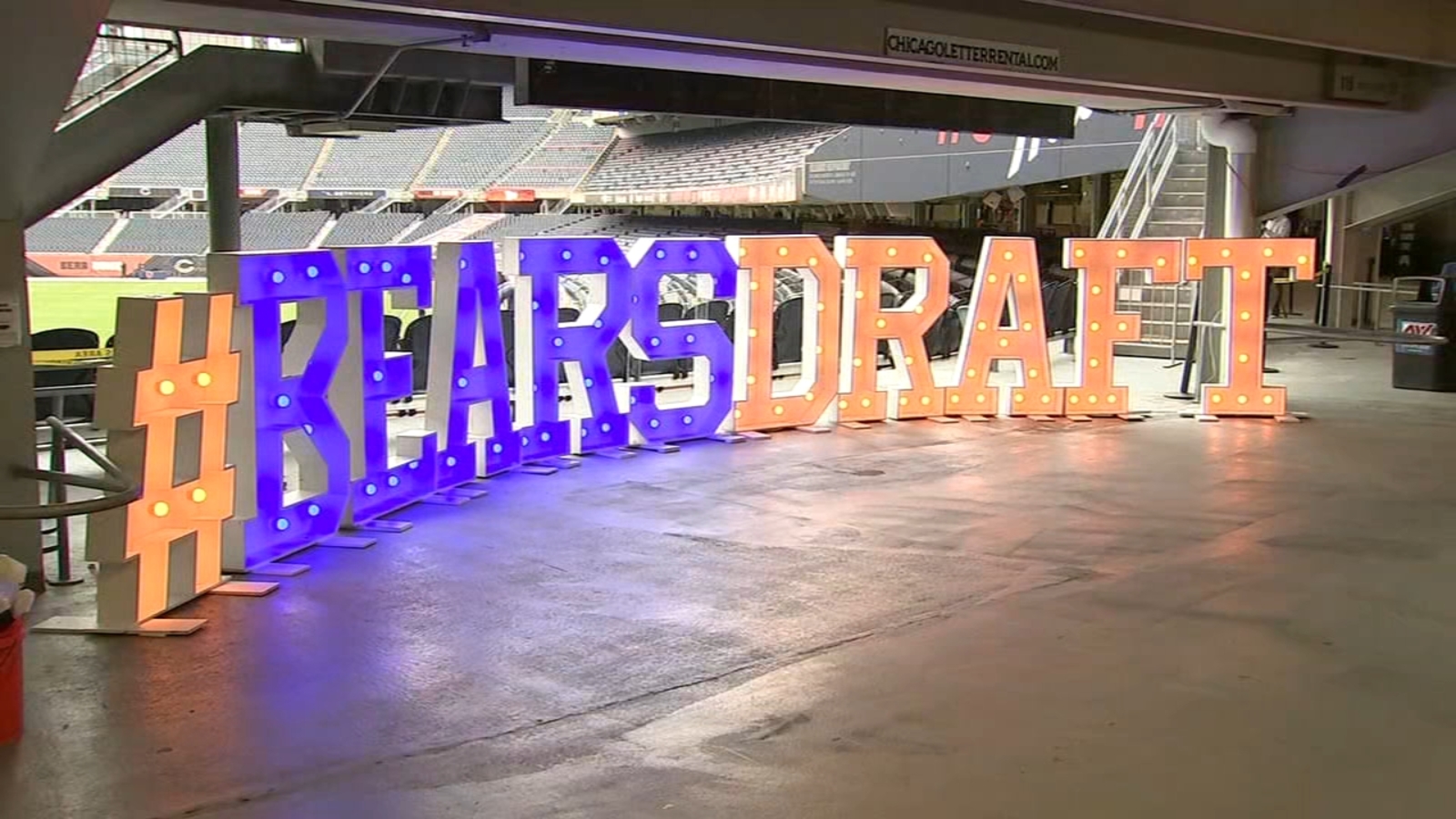 CHICAGO (WLS) — The Chicago Bears are slated to pick three times in the fifth and sixth rounds of the NFL Draft.

The team will enter the draft’s third day without a fourth-round pick, but will have two picks in fifth round and one pick in the sixth round.

Thursday night marked the high point of the NFL’s offseason with the league’s annual draft in Las Vegas. It’s the first time the draft has been held in Vegas. The city was slated to host the event in 2020 but that plan was scrapped due to the pandemic.

The Bears did not have a pick in the first round this year after trading up to pick quarterback Justin Fields last year. However, the Bears did have two second round draft picks, at 39th and 48th overall.

Bears fans celebrated the new members of the team at a watch party at historic Soldier Field Friday night. Everyone is ready for a fresh start this coming season as the scoreboards kept people updated.

“A lot of fun. It’s great out here, the weather — it’s raining a little bit but it’s great,” said one fan.

The Chicago Bears addressed a need in the secondary with their first draft pick under new general manager Ryan Poles, selecting Washington cornerback Kyler Gordon in the second round at No. 39 overall on Friday night.

The Bears were looking for a potential starter opposite Jaylon Johnson. The athletic and hard-hitting Gordon fits that description.

“So the Bears needed a cornerback so I feel like it’s a perfect fit for what we need,” said one Bears fan.

“I think it’s pretty good for us, we needed help on the secondary,” added another.

Gordon had 46 tackles – two for loss – and two interceptions to go with a team-high seven pass breakups in 12 starts last season. Washington went 4-8 and finished fifth in the Pac-12 North with a 3-6 mark in conference play.

The team later selected Jaquan Brisker, a safety from Penn State, with the 48th overall pick.

Brisker, who spent two years at Lackawanna Community College, was a second-team All-American as a senior last season. He had 64 tackles and 51/2 for loss to go with two interceptions and five pass breakups in 12 games despite a banged up shoulder. He opted out of the Outback Bowl loss to Arkansas to prepare for the draft.

With the 71st overall pick, the Bears drafted Velus Jones Jr., a wide reciever from Tennessee.

However, other fans wished the Bears draft picks would help protect the franchise QB.

“Well, I was hoping to get an offensive lineman. But we are rebuilding.” ,” said a fan.

The Bears went 6-11 last season and missed the playoffs for the ninth time in 11 years. That convinced chairman George McCaskey to make big changes, so he fired former GM Ryan Pace and coach Matt Nagy and replaced them with Poles and Matt Eberflus.

Poles has been reworking the roster, trading star pass rusher Khalil Mack to the Los Angeles Chargers. His most notable free agent signing was a three-year agreement with former Cincinnati Bengals defensive tackle Larry Ogunjobi that got wiped out because of a failed physical.

The Bears came in with issues to address on both sides, considering their offense ranked among the NFL’s worst last year and the defense switching to a 4-3 front after playing a 3-4 for seven years.

Round one began Thursday night, with rounds two and three on Friday and rounds four through seven on Saturday.

You can catch the draft on ABC7.

In an NFL draft focused early on stoppers, it was the goers – wide receivers – who stole the spotlight Thursday night.

Not simply prospects, either.

Yes, the first five selections came on the defensive side of the ball, including edge rushers Travon Walker of national champion Georgia to Jacksonville and Aidan Hutchinson of Michigan to Detroit at Nos. 1 and 2. It was the first time in 31 years that no player on offense went in the opening five picks.

So, naturally, the next five choices were on offense. And those kept coming: right through No. 12.

And the theme throughout the first 20 picks was to get guys who could catch the ball – including Philadelphia acquiring standout A.J. Brown from the Titans, and Arizona getting veteran Marquise Brown from the Ravens.

“The more playmakers we can have, the better,” Cardinals coach Kliff Kingsbury said.

In all, six of the opening 18 selections were wideouts, starting with Southern California’s Drake London at No. 8 to Atlanta. He’ll team with tight end Kyle Pitts, the Falcons’ first-rounder in 2021, on a rebuilding attack.

No quarterbacks went until 20th, when Pitt’s Kenny Pickett found out he can simply switch to another side of the practice facility as he joins the Steelers and perhaps become Ben Roethlisberger’s successor.

But this is a draft rich with linemen and defensive backs as well as wideouts.

The 6-foot-5, 275-pound Walker, who has some raw elements to his game but an extremely high ceiling for his skills, joins former Clemson quarterback Trevor Lawrence as the second straight top overall selection by the Jaguars.

“I’m definitely prepared for it, being the No. 1 pick,” Walker said. “I have to say there’s a lot of expectations behind that, but it’s just the game of football to me.”

Walker was a one-year starter whose production (13 tackles for loss and 9 1/2 sacks) doesn’t jump out because he was part of a deep rotation at Georgia. His talent level certainly impressed the Jaguars, the NFL’s worst team the past two years.

“He’s an athletic freak,” Georgia defensive coordinator Will Muschamp told The Associated Press. “I swear to God he could line up at middle linebacker and go be fine. I would take him at No. 1 and not even blink.”

Commissioner Roger Goodell began the proceedings by estimating more than 100,000 fans were on hand at the theater built specifically for the draft. Walker was not in Las Vegas.

Hutchinson, a sack-master whose consistency and relentlessness helped the Wolverines to their first College Football Playoff, is staying home as a pro. The 6-foot-6, 265-pounder whose father Chris was a star player at Michigan in the 1990s, was the Heisman Trophy runner-up last season.

“I always wanted to be at Detroit. I’m grateful to be a Lion,” he said.

Cornerbacks Derek Stingley Jr. and Ahmad “Sauce” Gardner went next, to the Texans and Jets, respectively.

LSU’s Stingley is the grandson of former Patriots receiver Darryl Stingley, who was paralyzed in a 1978 preseason game. Gardner, of Cincinnati, was a major reason the Bearcats broke through into the College Football Playoff last season. He wore a brash bejeweled necklace proclaiming his nickname, and even an accessorized chain with a bejeweled sauce bottle.

“I know I’m going to be a great teammate and I’m going to be a sponge, somebody that’s able to take information from everyone and not feeling like I’m too good for anyone,” Gardner said. “Just being a hard worker.”

“I’m at this nirvana. I’m at peace,” he said, noting that Hall of Famer Michael Strahan has been a mentor. “It’s put up or shut up.”

When teams got around to the other side of the ball, they couldn’t stop. It began with North Carolina State tackle Ikem Ekwonu to Carolina and Alabama tackle Evan Neal to the Giants. Both teams are needy, to say the least, up front.

“It feels good legacy-wise,” Ekwonu said. “You know, kind of cemented myself in history of this draft class. I know this class is gonna be special.”

He loved the idea of staying in Carolina.

“My mom cried the second I picked the phone up,” Ekwonu said. “Honestly, it was just like surreal. Growing up being a Panthers fan and being able to play on a team that you grew up being a fan is really almost like a movie almost. It’s crazy.”

Seattle went for tackle Charles Cross of Mississippi State at No. 9. Then came three more receivers: Garrett Wilson of Ohio State to the Jets and college teammate Chris Olave to New Orleans, which traded up with Washington for the 11th slot; and Alabama’s Jameson Williams, coming off a serious knee injury, to Detroit, which moved up in a deal with division-rival Minnesota.

Another Georgia standout, defensive tackle Jordan Davis, was taken by Philadelphia at 13 after yet another deal, getting matters back to the defensive side. Later on, linebacker Quay Walker of the Bulldogs went to Green Bay, as did teammate Devante Wyatt. It’s the first time four players from the same defense went so early. And it became five when Minnesota concluded the dizzying first round by getting Georgia safety Lewis Cine.

The Jets got three players when they traded back into the first round to get the 26th spot from Tennessee once they saw Florida State edge rusher Jermaine Johnson slipped. Johnson previously had been at Georgia.

Penn State’s Jahan Dotson joined the receiving parade, going to Washington at No. 16, then the Titans added Arkansas WR Treylon Burks with the pick acquired for A.J. Brown.

“I think it’s a really valuable position,” Wilson said. “And I think the league is starting to show that in drafts and in the offseason. Being a receiver, I love to see it. You see people like Tyreek Hill and and Davante Adams, I mean those people, they change offenses. You know, Ja’Marr Chase, they change offenses, and I’m happy that receivers are starting to get that love.”

While passers went in the initial three spots of 2021, there was some thought none would go in the first round this year. But Pickett fell to the Steelers, which sure seems like a comfortable fit for both player and team.

Pickett came back for a fifth season and that decision certainly paid off. He took Pitt to its first ACC title.

Just after Pickett was, uh, picked, two players who were projected by many as second-rounders were chosen: Quay Walker and tackle Tyler Smith to Tulsa. So the Packers did not get an offensive helper for league MVP Aaron Rodgers on Thursday, but the Cowboys addressed a fading offensive line.

No wonder the Bulldogs won the national championship.

Overall 12 SEC players were chosen, with seven from the Big Ten, four from the ACC and Pac-12 each, and two from the AAC. There were two FCS players – Northern Iowa tackle Trevor Penning to New Orleans, Chattanooga guard Cole Strange to New England – and one from Notre Dame, safety Kyle Hamilton to Baltimore.

Georgia had its five defenders, while Michigan, Alabama and Ohio State each had two first-rounders.