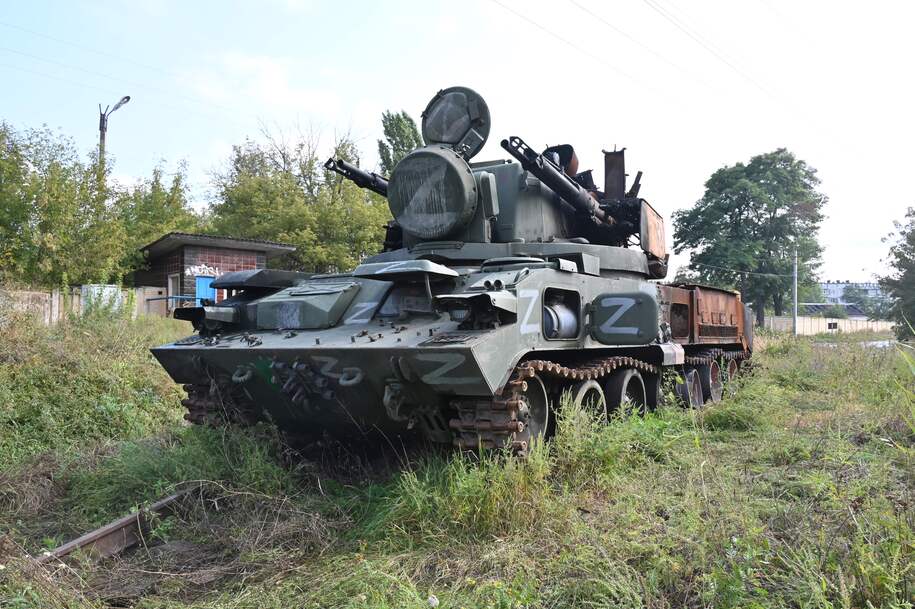 For the last week, it’s been nearly impossible to say just where the front line between Ukrainian forces and Russian invaders really fell. That was especially true in the days immediately following the liberation of Izyum, when Ukrainian scouts ranged far out into Luhansk Oblast and Russian forces seemed to keep right on running—even when Ukrainian troops stopped to take care of folks in newly freed towns.

Where things seem to be falling out in the area now is just where many predicted: along the banks of the Oskil River. Ukrainian forces had crossed the river in at least three locations and engaged in combat at locations a good 20 kilometers on the eastern side of the divide. However, when it came time to settle down and hold territory, it seems that both Ukraine and Russia are, for now, settling in along what may be the last big geographic feature short of the Aidar River, deep in Russian-occupied territory.

Ukraine may still have some forces across the river north of Horokhovatka. But if so, they don’t seem to be advancing at this moment, or at least there are no new reports of battles fought / towns liberated. In fact, the only active combat in the area on Thursday seems to be in the south, just across the Siverskyi Donets River, around the city of Lyman.

Even before the Kharkiv counteroffensive really kicked off, Ukraine was able to move forces across the river into Staryi Karavan and Ozerne, apparently unopposed. But even though Ukraine had forces on the south side of Lyman earlier this week, Russia reportedly reinforced that location with troops retreating from Izyum. It’s hard to tell just how much fighting is actually going on in the city. NASA FIRMS data shows very few hotspots in the area over the last five days, and Lyman right now may be more of a contest of troops getting into position, than actively exchanging artillery.

Over to the west, directly south of the dam across the Oskil, there were reports on Thursday (1PM ET / 10 PM in Kyiv) that Ukrainian forces had taken Studenok and the neighboring town of Sosnove.

[NOTE: At this point, there was a site issue that ate the second half of this post … I’m trying to restore it from what I can remember. Apologies for those who are seeing something different now than what was in here originally.]

Normally, the sources for the Studenok and Sosnove would have been good enough to mark them on the map, but since this week has included a lot of … enthusiastic reports even from normally conservative sources, I’m holding off on making any changes for now.

Speaking of enthusiastic calls. here’s the Kherson map from last night. That map reflected a call that Kyselivka was once again fully under Ukrainian control. However, that turns out to not quite be the case.

Kyselivka may be the most “Ukraine has taken it. No it hasn’t” point on the entire map. That’s because this Kyselivka is often confused with another Kyselivka just 25km to the north (how does anyone in the area keep them straight?). But in this case, there’s another issue.

For some time, the number of people actually in Kyselivka (pre-invasion population 2,500, current population approximately 0) has been shrinking. Ukrainian forces hung on to the western edge of the town, while a slowly-declining Russian group held the east. Now there are reports that Russia has completely left the town. Only that doesn’t mean that Ukraine has fully occupied it.

That’s because Kyselivka is just 10km west of a whole metric a$$-ton of Russian artillery near Chornobaivka. Occupying what’s left of the entire town is regarded as highly unhealthy, and impossible to maintain so long as Russia has some shells left for those guns. So right now, Ukraine doesn’t so much have Kyselivka as it is able to look into Kyselivka and see that it’s satisfyingly free of Russians.

And that’s it. If all this seems like pretty small potatoes after the excitement of the last week, that’s because Ukraine is now trying to sit back and digest a very large meal. Not only did it just liberate 8,500 sq miles, full of 350 villages and 150,000 people all of whom need to be attended to, it’s also dealing with thousands of Russian prisoners and enough captured Russian equipment to launch a new division. In tanks alone, it seems like Ukraine’s capture count is likely to exceed 100. That’s just captured, not including destroyed.

[NOTE: And this is the point where an error chopped off what remained again … which made me pretty much surrender. Sorry for those who commented/read the previous version. Because now I’m killing it and starting this over here. And then I’m going to walk away and stop looking.]

We could fill a week with nothing but images of Russian hardware that now needs to be checked for boobytraps, sent back from the front line for maintenance, given some quick rebadging, a fresh tank of fuel, and a new compliment of supplies before riding out as part of the Ukrainian army. And when it comes to all those Russian ammunition depots that have been recovered in amazing condition …

Ukrainian soldiers capturing an ammo depot near Izyum that the Russians had to leave behind due to the quick advance of the Ukrainian forces.

Thanks for the gift Russia! pic.twitter.com/ABoqAUCwoK

All the materiel needs to be moved from these locations before someone in Russia wakes up and says “hey, didn’t we leave a lot of artillery shells right about there?” If someone in Russia decides they can spare a missile from going after civilian targets, there might actually be an issue here. But then, that would mean they couldn’t spend that missile shooting at apartment buildings or dams.