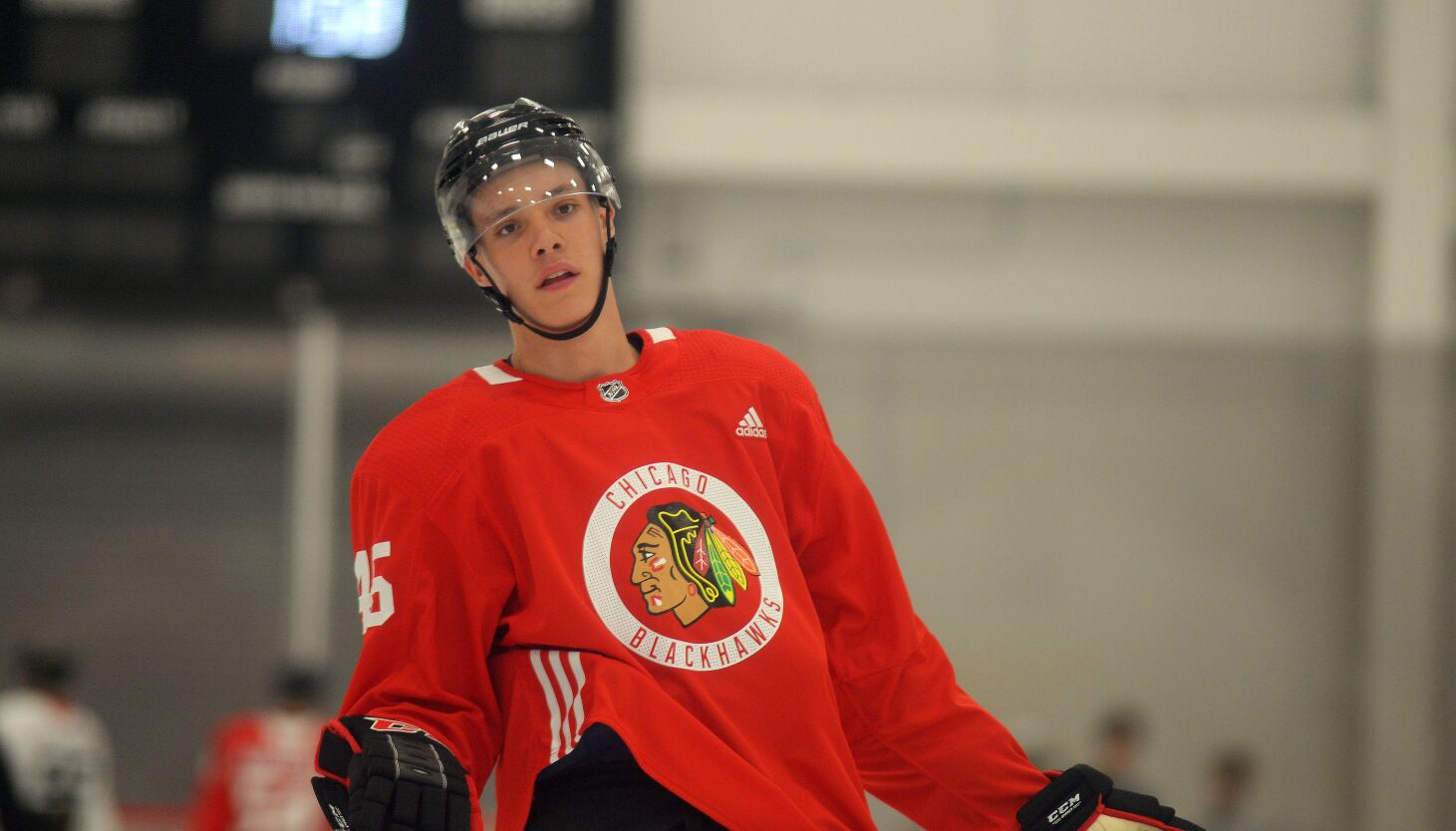 Alex Vlasic was told to arrive at Fifth Third Arena for his first Blackhawks practice Thursday just before 9:00.

“I came in [and] didn’t really know what to do with myself, to be honest,” he said. “I talked to the equipment guys, got all my gear. And then I was waiting around, walking around, killing time, waiting for people to show up. I was stressed a little bit. Then I had breakfast, introduced myself to some guys.”

Interim coach Derek King said he’s hesitating to throw Vlasic directly into the fire Saturday against the Wild, but due to contract rules, Vlasic will remain in the NHL the rest of the season regardless.

“He closes well, he’s got a good reach [and] his first pass is hard,” King said after watching him practice Thursday. “He snaps that puck around pretty good. And when he did…the players were like, ‘I like this kid already.’ Then I’ve got to chime in and say, ‘It’s about time we got a defenseman who can make a pass around here.’

“Good for the kid. It’s got to be an exciting time for him. I always like seeing guys like that when they get their first game, whenever it is: the excitement, the nerves, seeing how they react.”

He grew up in Wilmette frequently attending Hawks games as a fan, but not as a Hawks fan. His cousin, Marc-Edouard Vlasic, is a 16-year staple on the Sharks, and that allegiance won over his heart as a kid.

“We would always go when they played the Hawks, wear the Sharks jerseys, get booed,” he said, laughing.

Not too many years later, Vlasic is wearing a No. 43 red-and-white Hawks sweater himself, collecting a paycheck from the team and mingling with the likes of Patrick Kane in the locker room.

“It doesn’t feel real,” he said. “It doesn’t feel like I’m on the team; it just feels like I’m just practicing. To everybody I was just like, ‘Wow, I’ve been watching you on TV for a number of years now.’ It was definitely surreal.”

He learned at BU this season how to play with the physicality and strength to match his 6-6 frame, while also receiving pointers about important pro-hockey habits from former Devils forward-turned-BU assistant coach Jay Pandolfo. And this week, with Vlasic weighing whether to sign with the Hawks or return for his senior year, Pandolfo told him he was ready to move up levels — so he did.

Despite his physical maturation, though, he still possesses more offensive and puck-moving skills than one might expect — thus King’s compliments about his passing. That confidence with the puck helped him adjust quickly on Day 1 of practice.

“Sometimes it’s easier at the NHL level, because you find guys are smarter and faster, and when you have the puck on your stick, they’re just in the right spots,” he said. “That’s what I found today, honestly. Playing the five-on-five ‘O’-zone drill, with the puck on my stick, guys were getting open. Obviously playing defense, [though], guys are a lot stronger and faster, so that was a lot harder.”