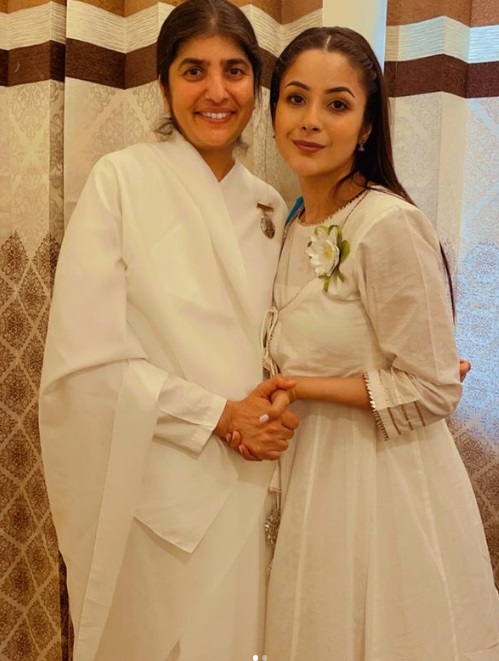 Shehnaaz Gill, who became a household name with Bigg Boss 13, recently attended the launch of Empowerment of Girl Child campaign hosted by Brahma Kumaris in Delhi. Shehnaaz, who signed up to be an ambassador of the campaign, spoke about girl empowerment, gender equality and difference between pure love and attachment.

Sharing a photo from the event, Shehnaaz Gill wished her fans on Mother’s Day. For her, a mother is all about unconditional love and acceptance.

There are many videos from the event that have taken over the internet. Fans are regularly sharing various clips from her heartfelt speech about wanting to make a difference to the society, her take on being a girl and what love is for her. She was also seen grooving with other Brahma Kumaris on the stage.

In one video, she says, “Attachment hurts but love is pure. You don’t cry when you love someone. Whatever relationships you have with your brother, husband etc are temporary and will remain here only.”

Talking about gender equality, the actress-model said, “I want to say that stop making girls feel small. I am also a girl. It shouldn’t be that brothers should walk ahead of their sisters. If the brother will go, then the sister will go. Girls should not feel scared. Boys and girls shouldn’t be differentiated. We all should think we are souls then no one can harm us. Competition, comparison, and dishonesty will fade away if we think like this.”

Shehnaaz also shared pictures with Sister Shivani on her Instagram. She captioned it, “Soul Sisters.”

Fans are thrilled to see this spiritual side of Shehnaaz. They have showered her with love and praise on each of the viral videos.

For those who don’t know, Shehnaaz Gill got associated with Brahma Kumaris after the death of her rumoured boyfriend Sidharth Shukla in September last year.

On the work front, Shehnaaz will reportedly be seen in Salman Khan’s Kabhi Eid Kabhi Diwali opposite Aayush Sharma.