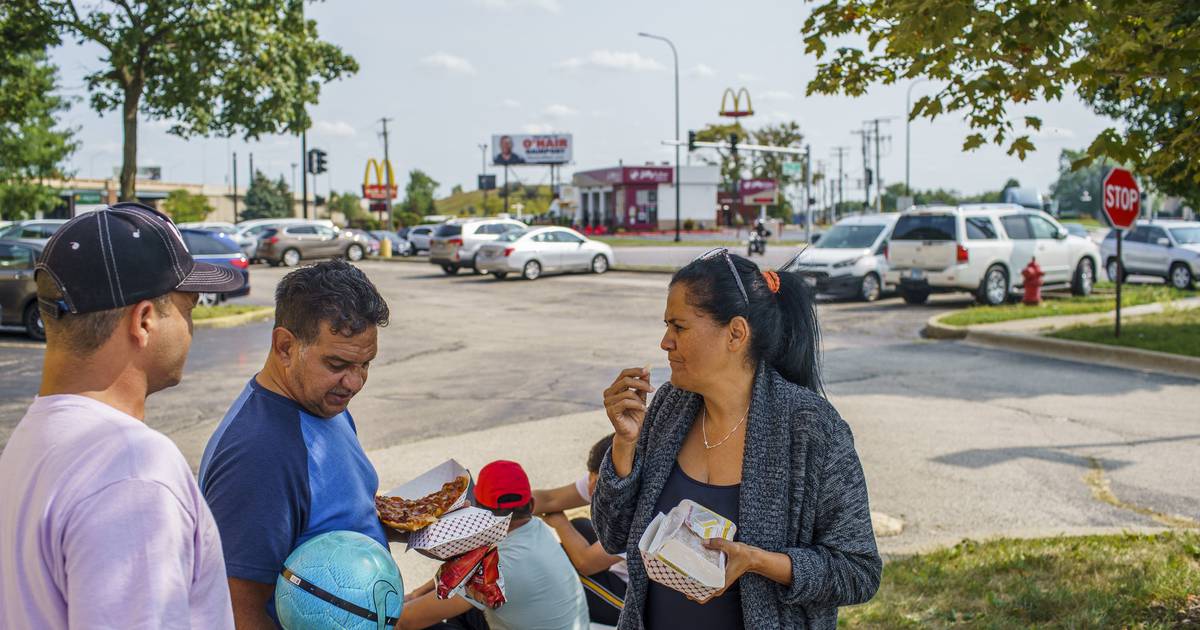 For the first time since fleeing their beloved Venezuela in early June, three generations of Elizabeth Navarro’s family finally reunited in the Chicago area this month after crossing several borders. A tear rolled down the matriarch’s cheek Thursday as she expressed their desperation to leave everything behind and start a new life in the United States.

Navarro and her husband, Jesus Sanoja, said they had to sell all their assets to pay for their journey north. Their four children, two of their spouses and three small grandchildren also traveled with the couple. Though the 12 of them crossed the southern border on the same day, they were separated when each was processed by immigration authorities and taken to separate shelters in Texas, she said.

But they all knew that Chicago would be their destination regardless of where they were taken after that, Navarro said. So even after most of the family was bused to New York from Texas as part of Gov. Greg Abbott’s effort to send asylum-seekers to sanctuary cities, the family made their way to Chicago with the help of New York organizations.

The family’s wayward journey to Chicago is not unlike the experiences of thousands of migrants being bused across the country by the governors of Texas and Arizona for political purposes.

[ More migrants from Texas arrive in Chicago, the fourth group of buses in less than two weeks ]

This week, Republican governors escalated their practice of sending migrants without advance warning to strongholds for Democrats, including a wealthy summer enclave in Massachusetts and the home of Vice President Kamala Harris, taunting leaders of immigrant-friendly “sanctuary” cities and highlighting their opposition to President Joe Biden’s administration policies.

The latest surprise moves — which included two flights to Martha’s Vineyard Wednesday paid for by Florida — were derided by critics as inhumane political theater.

Upon their arrival in Martha’s Vineyard, where former President Barack Obama has a home, the migrants, who were predominantly from Venezuela, were provided with meals, shelter, health care and information about where to find work.

But in Elk Grove Village, the Navarro family and other migrants — all sitting outside the hotel where they have been placed for temporary housing by city and state efforts — said they didn’t feel coerced to board the buses that were made available to them. But they agreed that with the lack of comprehensive help or options to travel to different cities, they felt forced to take whatever route was presented to them after their monthlong journey to safety.

“They (immigration authorities) didn’t force us to get on the bus, but they didn’t give us other options to go elsewhere,” Navarro said. “We were told that at least once we arrived at New York, there would be people that could help us get to Chicago.”

Once in Chicago, the family reunited with Sanoja, the patriarch of the family and the only one who was bused directly to Union Station.

“We are just thankful to be here now,” he said.

On Wednesday, Gov. J.B. Pritzker signed a disaster proclamation to secure resources for the asylum-seekers bused to Illinois from Texas and deployed 75 National Guard members to assist with the logistics of receiving the migrants.

The busing program is part of Abbott’s Operation Lone Star — a border security effort launched in response to the rising border crossings, which he blames on Biden’s immigration policies. According to the busing policy, the rides from Texas to sanctuary cities like New York, Washington, D.C., and now Chicago are free and voluntary.

What happens next to the migrants remains to be seen.

Immigration law is “quite complex,” said Johannes Favi, director of the Interfaith Community for Detained Immigrants’ Chicago Immigrant Transit Assistance program. The law applies to people differently depending on their circumstances, he said.

People seeking asylum have the same rights under the Constitution and are given a court date for a chance to gain legal status, he said. At the border, they are asked about their circumstances and are allowed to enter with a chance of status as long as their reasoning is credible.

Those seeking asylum “come with nothing,” Favi said, unlike those entering a country with refugee status, which means the person has applied and been given documentation beforehand to enter. Refugee status also means a person can immediately apply for government benefits, like health insurance, and work permits.

Although not an immigration attorney by training, Favi said he has “been through the system” himself when he came into the country from Benin, a country in West Africa, in 2013 and was detained for 10 months and two weeks. He’s been helping new arrivals in Chicago for three years.

Favi said he is “grateful” to see the city and state doing “the best they can” and stepping up to “take care of the Texas migrant crisis.” He said the people arriving in Chicago the past few weeks have the same rights as any other human being and deserve to be treated with respect.

“Even if you didn’t come legally, you’re still a human being and deserve dignity from our government and our system,” he said.

Carlos Castillo, a father of four, arrived in Chicago in the first group of migrants that was bused directly from Texas in late August. Though he doesn’t understand the politics behind the program, he said that having Chicago as his only option has been a blessing.

“I never thought I would find so much support here,” Castillo said.

He initially wanted to go to Minnesota, where some friends have found jobs, he said. At the shelter where he was staying in Texas, he was told that by traveling to Chicago — the only route available — he would be closer to Minnesota.

The man, now wearing clean clothes and a new hat, recalled the night he arrived in Union Station, confused, and tired.

Migrants told the Tribune that most boarded the buses hopeful to find people and organizations that can help them and to get farther from the southern border. They said that when they leave Texas, they are told that in Chicago they’ll receive shelter but they are given no specific guidance or logistics.

Though the state and the city in collaboration with local organizations are now working to welcome the migrants who arrive in Chicago in large numbers at once, they had no specific information of the time and the number of migrants who would arrive, said Erendira Rendon, the vice president for the Immigrant Advocacy and Defense Project at Chicago’s Resurrection Project.

Rendon has been at the forefront of the efforts to coordinate the new migrants who are arriving in the city by ensuring that they are transferred to a shelter where they can get resources.

“So they were put on those buses and all they knew is that they were coming to Chicago, nothing more,” Rendon said when the first group of migrants arrived. If the city hadn’t acted soon enough, many could have spent the night in the streets.

Helena Olea, associate director of programs at Alianza Americas, said the migrants aren’t required to get on these buses. But most feel like it’s their only option.

“If you don’t take that bus, what are you gonna do?” she said. “When you have nothing and they tell you, ‘Go to New York, they welcome immigrants. Go there, they’re gonna help you,’ that’s why people get on the bus.”

As of September, an extension of temporary protected status for Venezuela is in effect for 18 months until March 10, 2024, according to U.S. Citizenship and Immigration Services.

Nicaraguan and Honduran migrants who arrived in the U.S. by Jan. 5, 1999, are also eligible. And El Salvadoran immigrants present in the country since March 2001 are eligible. A redesignation of temporary protected status for all these countries would give more recently arrived migrants the opportunity to seek protected status, Olea said.

“We are asking for this redesignation in light on the conditions at those countries that really make it very difficult for individuals who are returning to those countries,” Olea said, “and that’s why we continue to observe a flow of individuals of parents with children trying to reach the United States and seek protection.”