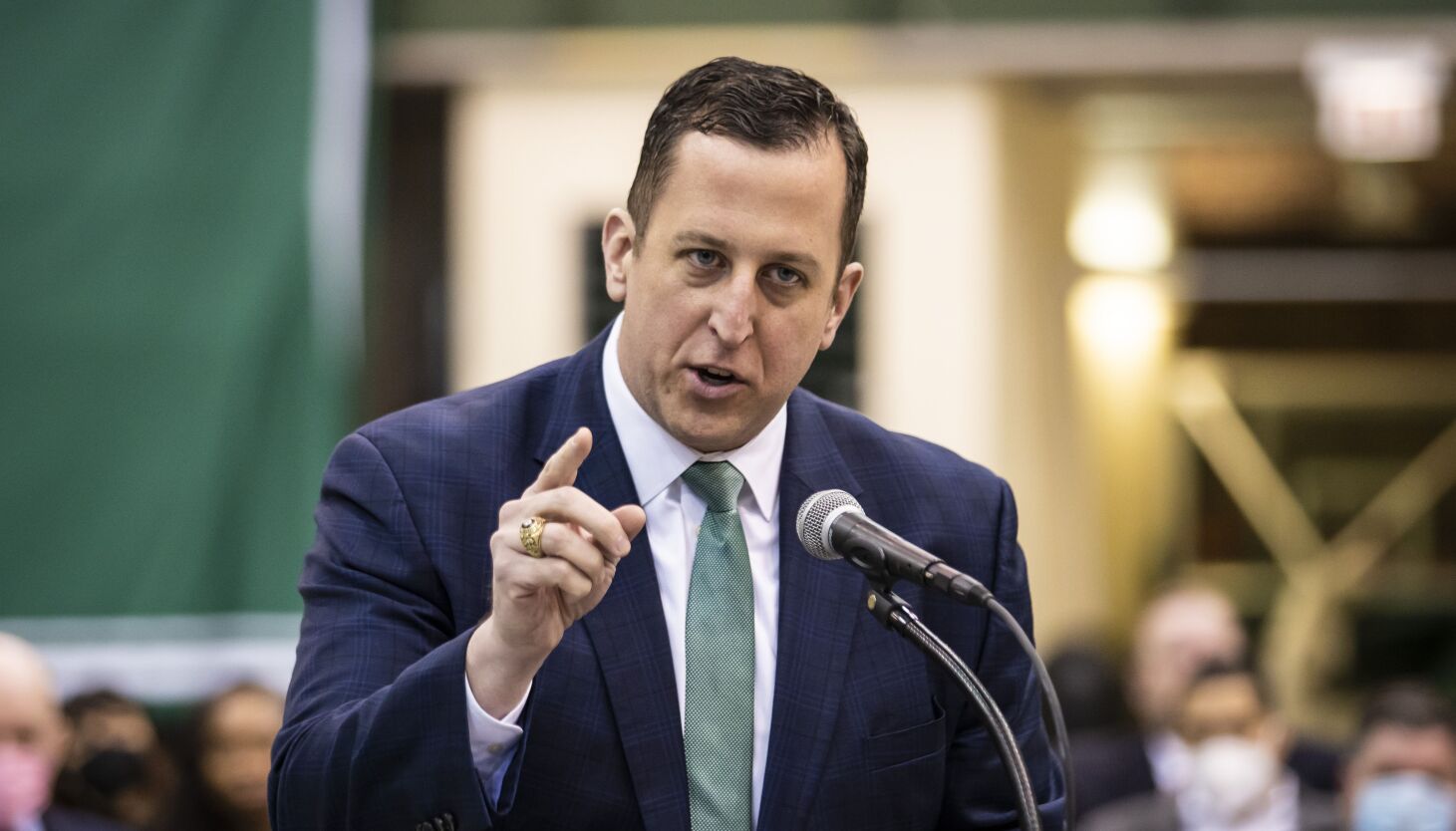 For more than two years, lawyers for the state of Illinois fought against a lawsuit filed by the former chief of staff to powerful Sen. Michael Hastings, D-Frankfurt.

But the state paid $100,000 earlier this year to the ex-chief of staff to Hastings and her lawyer to settle the case, which included accusations of racial and gender discrimination against the Democratic lawmaker.

The state also hired a private attorney who represented Hastings — for nearly $47,000.

Though the civil case has been settled, Hastings now faces serious new personal accusations from his estranged wife that recently came into public view and have threatened to derail his once-promising political career.

Boasting a West Point education and military service in Iraq, Hastings, 41, had been viewed by many as a rising star in Springfield, and he launched what he hoped would be a run for a statewide office this year.

Instead, he now finds himself facing a Republican challenger in November to hang onto his Senate seat representing a district in the south suburbs, where Hastings’s family is powerful.

Hastings gave up a role in the Senate Democrats’ leadership team last month, soon after the accusation of domestic abuse from his estranged wife surfaced online this summer.

According to police records obtained by WBEZ, Hastings’s wife told officers last year that, in 2020, he put her in a headlock and repeatedly slammed her into a door. Hastings has denied the accusations.

The lawmaker filed for divorce from Kathleen Hastings last year. Will County officials have taken the unusual step of sealing the entire proceeding in domestic court from public view.

But Jen Walling, an environmental lobbyist in Springfield, told WBEZ that Kathleen Hastings’s complaint to police — and what she describes as her own experiences being bullied repeatedly by Michael Hastings in professional interactions — have led her to decide she would no longer lobby him and to call for his resignation from the Senate. Walling, longtime executive director of the Illinois Environmental Council, said in an interview that Hastings yelled at her, pounded his hands on a table in a Capitol meeting room and approached her in a menacing way during disagreements about legislation in Springfield during the past five years.

“He clearly, to me, in observing him, has had serious issues with anger management that aren’t appropriate for the workplace where we are making laws for the state of Illinois,” Walling said.

Hastings declined to be interviewed.

In a written statement, Hastings spokesman Ray Hanania said Walling was “not being honest,” and he suggested her accusations and other recent complaints against Hastings were designed to hurt his reelection bid.

Hanania said Michael Hastings requested that his divorce case — which typically would be open to the public — be hidden.

“A divorce is a personal matter,” Hanania said. “Until it is resolved, it shouldn’t be released to be used in any unrelated manner, especially to influence politics or an election.”

Records show the couple got married in Las Vegas in 2014 and that the senator filed for divorce on June 21, 2021.

Court and police records show Hastings filing for divorce came the day after an officer in Frankfort responded to “domestic trouble” reported by the senator’s wife. In his report, the officer wrote that Kathleen Hastings “advised there was a verbal altercation with her husband, Senator Michael Hastings,” at about 4:30 p.m. on June 20, 2021.

While filing the report last year, Kathleen Hastings told the police she’d had a violent clash with Michael Hastings in November 2020.

“She also advised on 11-09-2020, Michael battered her, by placing her in a chokehold/neck restraint, and slammed her body into a door multiple times,” according to the report. “She advised it was the only time he was ever physical with her and she wanted to contact FPD for help, but feared for her safety. She also explained she did not want it all over the media, so she withheld from reporting the battery.”

But she told the police that the previous eight months of her husband “being emotionally and verbally abusive” prompted her to decide “she is done with the civil route.”

But, according to the police records, Kathleen Hastings told police she did not want them to “speak with Michael or investigate the battery” that allegedly occurred the year before she called police to her home.

Police records from two other south suburban communities, Mokena and New Lenox, show Michael Hastings recently involved police in his and his estranged wife’s conflicts over custody of their children.

After a dispute about the time and place for transferring the children on July 8, the senator contacted the police in Mokena and asked that they arrest his estranged wife.

The police said Kathleen Hastings provided them with proof the couple had agreed to a change in the agreed-upon routine. But an officer wrote that Michael Hastings “was not in agreement with this compromise and wanted her cited/charged for visitation interference. He was very insistent that she be charged and that was declined by MPD, as she was cooperative and waiting in Frankfort for him to come get the kids.”

After the Mokena police rejected his “very adamant” demand, Michael Hastings called the police in New Lenox and asked them to arrest Kathleen Hastings, records show. When the New Lenox police also declined to arrest Kathleen Hastings, an officer reported that Michael Hastings told him his decision “was not acceptable and I wasn’t fulfilling my duties as a police officer.”

While the divorce case proceeded in secrecy in Will County, Hastings’s long-running legal fight with a former aide reached its end in Cook County circuit court.

The aide, Cassandra Matz, sued the Illinois State Senate and Hastings in 2019. She accused him of retaliating after she complained he had “discriminated against her based on sex, race, disability, and political discrimination,” court records show. Matz is Black. Hastings is white.

Much of Matz’s lawsuit was thrown out before the case was settled in December. State officials and Hastings continued to deny wrongdoing and entered into the deal with Matz “to avoid further expense,” according to the agreement.

The attorney general had hired lawyer Ryan Jacobson to represent Hastings in the case, according to state records. Jacobson said he worked on the case at a steeply discounted rate and that some of the payments from the state to his firm went for outside mediation, court costs and administrative fees associated with the case.

Annie Thompson, a spokeswoman for Attorney General Kwame Raoul, would not say why the state agreed to settle the case. Thompson said it isn’t uncommon to settle a lawsuit filed by an employee because a trial “can be unpredictable and ultimately cost taxpayers more money.”

Walling, the environmental lobbyist, said she knew it could be detrimental to the issues she champions in Springfield to publicly complain about Hastings, who chairs the Senate Energy and Public Utilities Committee. But Walling said that, after hearing about Kathleen Hastings’s accusation of domestic battery, she decided to speak out about the senator.

Walling said her problems with Michael Hastings date to at least 2017. During negotiations over potential legislation, Walling said, Hastings “just would all of a sudden get angry and stand up and pound the table” and did so on multiple occasions.

She said that, when she angered Hastings, he retaliated through official actions.

“Bullying and threatening is just how he behaves in Springfield,” Walling said. “He threatened to kill all of my bills. He would refuse to let our folks testify in committee.”

Walling provided screenshots of text-message exchanges with other lobbyists in 2019, after what she said was a confrontation in a private meeting with Hastings.

“Did you just hear Hastings yell at us?” she wrote to one lobbyist.

She said Hastings should resign from office or, at least, be removed as committee chairman.

“He is not somebody that I will consider going in to lobby anymore,” Walling said.

Hanania said Walling “is the bully.” He also said Walling’s group had given Hastings an award, and he provided text messages showing friendly exchanges between the senator and the lobbyist, including some from earlier this year.