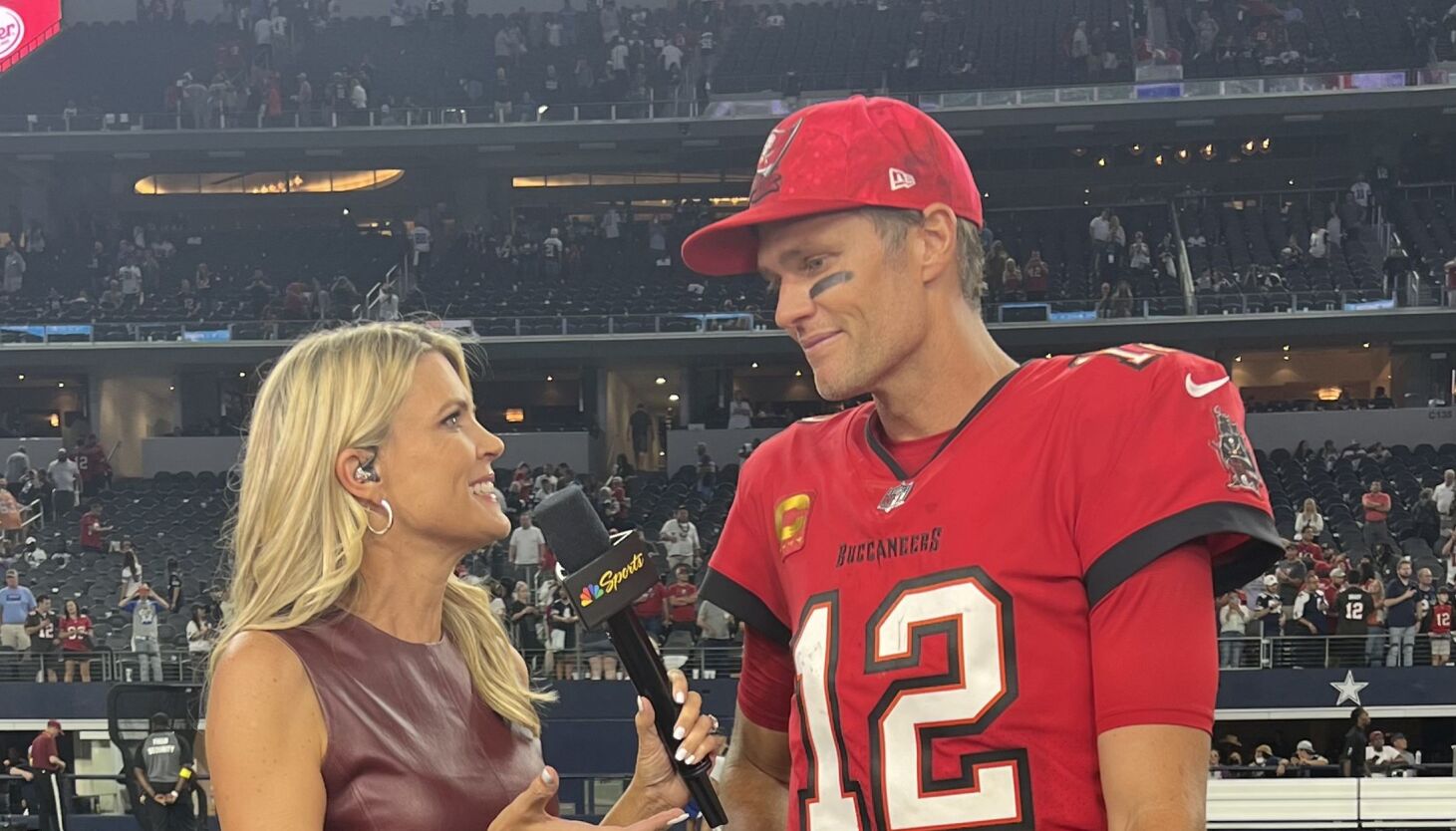 On Monday, Melissa Stark returned to her New Jersey home after working the first Thursday and Sunday night games of the NFL season for NBC. Her daughter Clemmie had just walked in from school and immediately had instructions.

“Mom, you need to post about the weekend,” she said.

Naturally, social media isn’t as ingrained in Stark, 48, as it is in Clemmie, who, like most teenagers, has grown up with it. So Stark handed over her phone.

“On Twitter and Instagram, she posted a picture of Tom Brady and me from 20 years ago and then [Sunday],” said Stark, the sideline reporter for “Sunday Night Football.” “The kids just know so much. She goes, ‘Will you hire me?’ I’m not gonna pay you.”

Clemmie might be a good hire. The post of Stark interviewing Brady on ABC’s “Monday Night Football” juxtaposed with the interview Sunday drew lots of attention. From 2000 to ’02, Stark was the sideline reporter while Al Michaels and John Madden were in the booth.

After two decades away from prime time, Stark is part of NBC’s mostly new “SNF” crew. She replaced Michele Tafoya, who left to pursue a career in politics. Mike Tirico replaced Al Michaels, who’s now on Prime Video’s “Thursday Night Football.” But Cris Collinsworth is back for his 14th season on the show. They’ll be on hand Sunday at Lambeau Field for the 205th meeting of the Bears and Packers.

Stark was a surprise successor. Kathryn Tappen had filled in last season when Tafoya was off, but the job went to Stark, who admitted her own surprise when Fred Gaudelli called in the spring to ask if she was interested. Though Gaudelli is now the executive producer of “TNF,” he still contributes to “SNF.”

“When he called, I thought he was talking about Amazon [Prime Video],” Stark said, “and I was like, This will be so perfect, my kids will be in school all week and then I’ll be back for the weekend. And he’s like, No, I’m thinking Sunday night. And I just thought, Wow, amazing, but wow, how am I gonna make this work with four teenagers at home.”

Stark left “MNF” because she was pregnant with her first child. With another son and twin girls, she had to figure out if committing to the job was possible, let alone sensible. It would require her to be away Thursday through Sunday each week. She talked it out with her husband, Mike.

“He’s my voice of reason,” Stark said. “I’m always the one that’s like, Try this, do this. He brings me back to earth. If he had said, We just can’t have you gone four days a week … but he was like, This is amazing that you’re going back 20 years later with four kids. This is incredible. You’re doing it, 100%.”

Stark’s kids have had to take on more work around the house in her absence. She admitted to doing everything for them, so when laundry had to be done while Stark was away, she received a call.

“My daughter said, Mom, I don’t know how to use the washing machine,” Stark said. “I had to FaceTime them before the Cowboys game to show them how to do it. So they’re learning. I think it’s good for them if I’m not doing everything for them.”

Stark had been hosting and reporting, including from the sideline, for NFL Network since 2011. An old boss at ABC/ESPN had joined the network and asked if she’d be willing to work even just one or two days a week. With her kids still young, she said it was daunting at first, but she quickly “got the bug.”

Stark’s love for football began with her father, Walter, a world-renowned eye surgeon at Johns Hopkins Hospital in Baltimore. He used to work with the then-Baltimore Colts, and he’d bring Melissa to games when she was as young as 7.

“I would go down to the locker room with him at halftime,” she said. “[Quarterback] Bert Jones had an eye issue, so he was close to my dad. He came to our house, he’d come for dinner, taught me how to throw a spiral in my front yard.”

For the game Sunday, Stark is preparing reports on quarterbacks Justin Fields and Aaron Rodgers. She talked with the Bears about how Fields has grown as a leader, and she spoke with a Rodgers doppelganger from Germany who made headlines last year.

Stark made her own headlines by returning to a prime-time football show after 20 years, and she hasn’t missed a beat.

“NFL Network games kept me going, but the level at NBC and the team that I’m working with is above and beyond, it’s incredible,” she said. “We have the best of the best. All the way to graphics, producers, directors. It’s such a phenomenal team.”