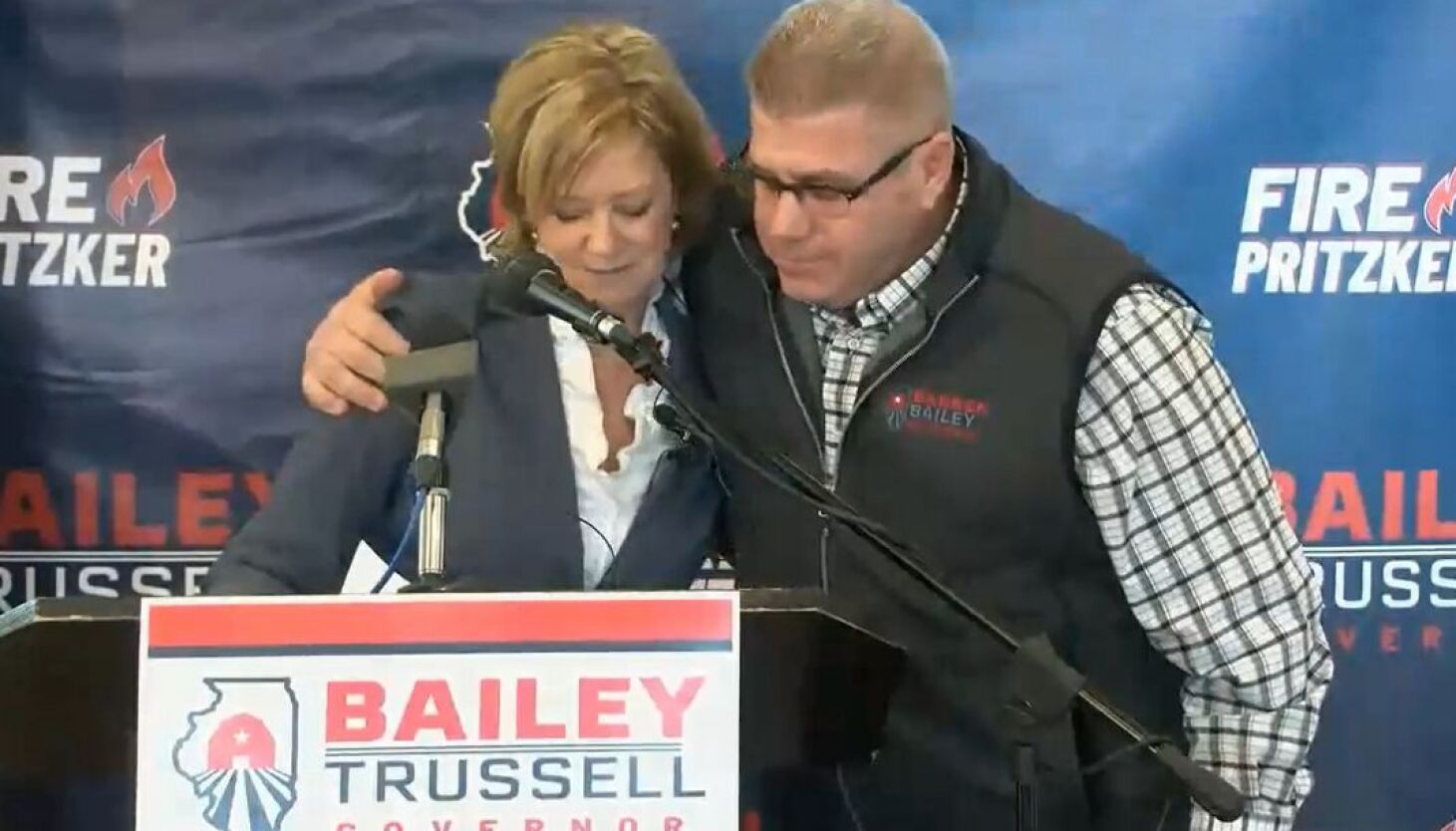 SPRINGFIELD — Conservative firebrand Jeanne Ives endorsed Darren Bailey for governor on Thursday, arguing the state senator from southern Illinois is the only Republican in the crowded GOP primary with a history of standing up to Gov. J.B. Pritzker.

“I know the Republican candidates running for governor. There are good men running for this office on the Republican side,” the former state representative from Wheaton said. “But when leadership was demanded against a one-man government in Pritzker, there was only a one-man response in Darren Bailey.

“For his courage and experience, I wholeheartedly endorse Darren Bailey for governor.”

Bailey called boost to his campaign “an absolute honor” and “humbling.”

“For the first time ever in the fall of 2017, I started seeing this woman in the top row and then the back of the House breathing fire down everybody’s neck. I’m like, I want to be like that when I grow up,” he said, recalling watching Ives on livestreams of debate on the House floor prior to him becoming a legislator.

Ives, who ran against former Gov. Bruce Rauner in the Republican primary in 2018, only mentioned one of Bailey’s four GOP rivals by name in her remarks at the news conference at an American Legion post in northwest suburban Palatine.

Aurora Mayor Richard Irvin, who is running for governor with state Rep. Avery Bourne, R-Morrisonville, as his running mate, received a $20 million donation from hedge fund billionaire Ken Griffin last month. Griffin, who is worth an estimated $25 billion, according to Forbes, contributed over $36 million to Rauner’s campaigns.

Ives had blistering words for Irvin and Bourne, arguing they are more in step with Pritzker and former Democratic Illinois House Speaker Mike Madigan than true conservatives on a host of issues.

“The truth is Richard Irvin and Avery Bourne just may be both Madigan and Pritzker’s favorite Republicans,” Ives said. “The Irvin-Bourne campaign cannot be trusted.”

“It’s Surprising she would endorse someone who raised property taxes 81 percent, voted for Obama and picked a Never Trumper as his running mate,” said Eleni Demertzis, an Irvin-Bourne campaign spokeswoman, referring to votes Bailey took as a local school board member and a 2008 Democratic Primary vote his campaign said he took to stop Hillary Clinton.

Bailey’s running mate Stephanie Trussell is a former WLS-AM 890 talk show host, who tweeted harsh criticism of Trump in 2016, but now says she came to support the former president “100%.”

In her remarks at the Palatine news conference, Ives made no mention of Republican candidate for governor Jesse Sullivan, whose running mate is a longtime associate of the Wheaton Republican.

Ives declined to endorse Murphy last month when she announced she was joining Sullivan’s ticket. At the time, Ives said she was “carefully considering the Republican candidates for Governor and assessing each candidate and their campaign’s ability to win before making my own personal endorsement.”

On Thursday, Murphy said she was “grateful” for what she’d learned from Ives over the past 10 years, but said the former representative “has always been her own person.”

“We have different ideas about what constitutes an effective approach. I have seen firsthand Jesse Sullivan’s approach to building coalitions on the campaign trail, and I believe in him as an outsider to the political machine,” Murphy said in a statement.

“We are good conservatives who love competition. This is the beauty of the primary process — we can all back different candidates, and after June we’ll all unite behind the candidate who can defeat J.B. Pritzker. I am confident that will be Jesse.”

Ives made no mention of the other two Republicans vying to challenge Pritzker in November, Bull Valley businessman Gary Rabine or former state Sen. Paul Schimpf of Waterloo.

Ives did discuss the federal indictment of Madigan, saying it was turning this year “into what should be the most consequential year for Illinois in a half century.”

“This indictment should be just the start of ridding the state of the machine politicians who have fiscally and morally bankrupted the state,” she said.

Madigan, 79, was indicted Wednesday, charged with a racketeering conspiracy and using interstate facilities for bribery, wire fraud and attempted extortion. The Southwest Side Democrat has denied being involved in any criminal activity.

Madigan was already key target for Republicans, and Wednesday’s indictment only sharpened the bulls-eye on his back.

Bailey waved a copy on the 106-page indictment from the podium on Thursday at the American Legion post.

“I grow corn and soybeans and wheat but unfortunately, I think the biggest crop that’s growing in Illinois is corruption,” Bailey said.