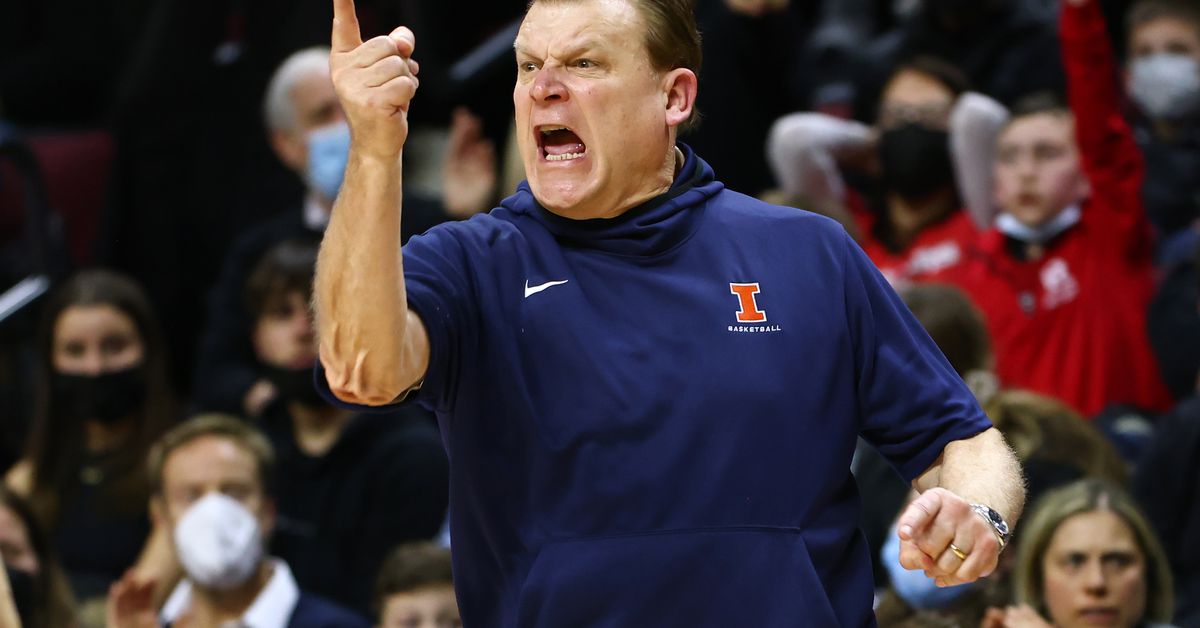 How does the slogan go? “No one out-pizzas the Hut”?

Yeah, well, no one outfights the Illini, either.

Illinois coach Brad Underwood was so offended by his team’s lackluster performance Wednesday in a 70-59 loss at Rutgers, he was still on edge two days later.

“It hurt my soul [to] feel like they played harder than my team,” he said. “That doesn’t happen very often. … That pisses me off. That’s some [expletive], to be honest. And I’m going to fight for that. I’m going to play guys — I don’t care if they’re five dudes at the rec center — [who are] going to fight now. …

“We got punked, and that’s plain and simple.”

It went down inside Jersey Mike’s Arena in Piscataway, New Jersey, but it might as well have been outside the Pizza Hut in Underwood’s hometown of McPherson, Kansas.

“Rutgers outfought us,” he said. “We went to the Pizza Hut parking lot and they kicked our ass.”

That’s where Underwood and his crew went during high school in the early 1980s when they “needed a good throwdown.” One can only assume the Dairy Queen and Bob’s Big Boy lots were enemy territory.

“That’s before everybody shot everybody,” he said. “Nobody did that back in the day. We just lined up, turned the car lights on and had some fun — see if we could get bloodied up a bit.”

2. Enter the Spartans: If Underwood and the No. 12 Illini are itching for a fight, No. 19 Michigan State — which hosts them Saturday — will happily oblige. Don’t forget how rough-and-tumble last year’s clash in East Lansing was. Former star Ayo Dosunmu left town with a broken nose courtesy of MSU’s brawny Mady Sissoko.

At 11-4 in Big Ten play, the Illini are a half-game behind first-place Purdue. The 9-5 Spartans are desperately trying to stay in the race. It’ll be as intense as a regular-season game gets, and the Illini — one of the most experienced teams in the country — are sure to respond after being called out by their coach.

Which is pretty much the whole point.

“He’s a Kyrie Irving,” Izzo said. “He’s as good with the ball as any college player I’ve ever seen.”

Blowing smoke just a little? One might take it that way. Then again, Izzo shot straight Thursday when sizing up the competition at the top of the league.

“I still think Purdue might be the best,” he said. “But I think Illinois is right there.”

4. But then there’s Rutgers: The Scarlet Knights — on an eye-opening streak of wins against Michigan State, Ohio State, Wisconsin and Illinois — are the hottest team in the league and, at 10-5, in the title race.

“How do you all feel about Rutgers now?” Izzo asked rhetorically.

Yeah, well, maybe we should take it down a notch and see what happens Sunday at Purdue.

5. Coachspeak, Part 1: Fifteen names are on the Naismith Coach of the Year late-season watch list, and Underwood is one of them. Wisconsin’s Greg Gard is another. That’s it for the Big Ten, which really doesn’t have much of a chance to produce the winner of the award.

Three who clearly could win it: Arizona’s Tommy Lloyd, Auburn’s Bruce Pearl and Providence’s Ed Cooley. But there’s still a lot of green left in that putt for each of them.

6. Coachspeak, Part 2: What about the Big Ten’s coach of the year? Maybe Underwood, especially if the Illini win their first regular-season title since 2005. Maybe Gard, whose team has far outperformed outside expectations. Maybe fifth-ranked Purdue’s Matt Painter. But Rutgers’ Steve Pikiell has some bouquets coming his way, too.

7. Coachspeak, Part 3: Anyone else surprised that Duke’s Mike Krzyzewski isn’t a Naismith finalist? His team is 21-4 and has been in the top 10 all season. He’s 75 and in the final season of an all-time-great career. So much for sentimentality.

But Krzyzewski has more important things to think about. He missed the second half of the Blue Devils’ most recent game due to an illness that had him feeling dizzy enough that he feared he might pass out. Here’s to a healthy home stretch.

8. Irish highs: Notre Dame continues to insist on behaving like a potential ACC champion. The refuse-to-lose Irish are now 12-3 in the ACC — tied with Duke for the top spot — and 15-2 overall since a rocky 4-5 start to the season. What gives?

Wll, there’s this: Paul Atkinson Jr., Dan Goodwin, Prentiss Hubb, Trey Wertz and Nate Laszewski made Notre Dame the first team in the nation this season to have five career 1,000-point scorers on its roster. Add to them another quality veteran in Cormac Ryan and, of course, high-scoring freshman Blake Wesley — a South Bend kid, no less — and the Irish have some serious balance to go with all their experience and good chemistry.

9. Eureka! Not to tell Loyola coach Drew Valentine how to do his job, but we’d put scoring at least 70 points at the top of every game plan from here on out. The Ramblers are 15-0 when they do that and 5-5 when they don’t. Further evidence that (truth-bomb alert) making shots is good.

10. Sweet! The 16: The NCAA selection committee will reveal its current top 16 teams on Saturday, and you know what that means: Critics will squawk, bracketologists across the internet will scramble to update their pages, fans nationwide will start pondering postseason travel … and then everything will change as more games are played. Still, it’s always a bit of a thrill to see those 16 teams in order for the first time.