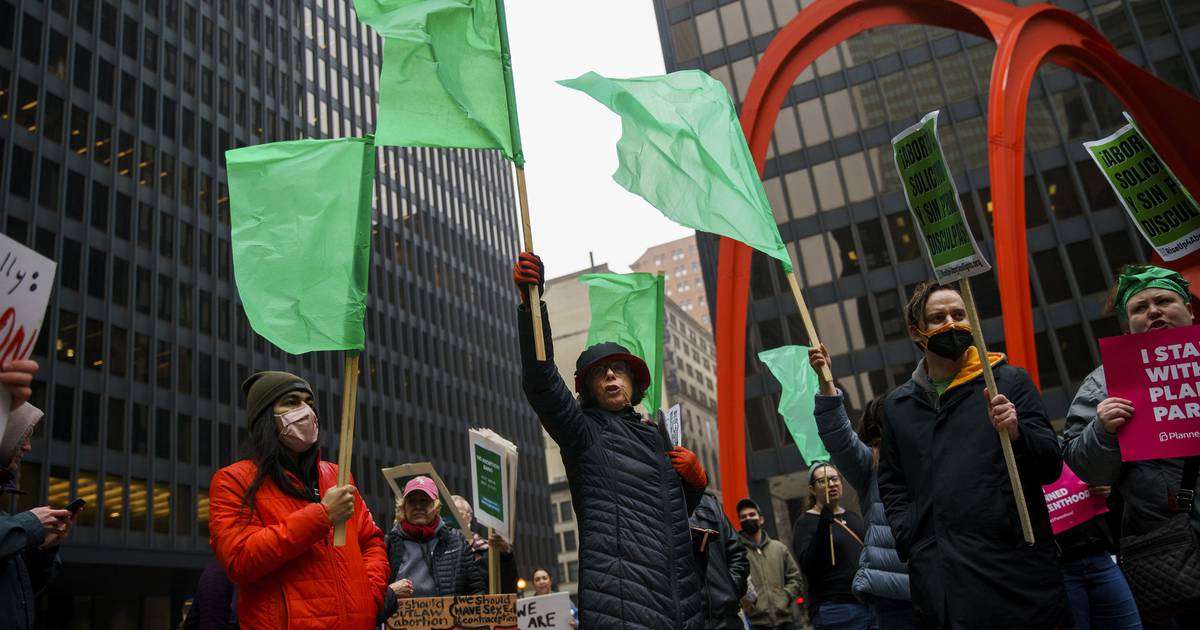 Well before news broke Monday night about the release of a draft opinion that suggests the U.S. Supreme Court could be preparing to overturn the landmark 1973 Roe v. Wade decision, Illinois residents have been wondering what impact such an action would have on abortion rights in their state.

About half of U.S. states are already expected to ban abortion if Roe falls, according to the abortion-rights think tank Guttmacher Institute. Twenty-two states, largely in the South and Midwest, already have total or near-total bans on the books. Aside from Texas, all are now blocked in court because of Roe.

Thirteen states have so-called trigger laws, which would immediately ban abortion if Roe is overturned and would presumably go into effect if the Supreme Court majority votes for the draft in late June or early July.

But Illinois is not one of them.

Keeping in mind that the draft is not the final decision, here are answers to questions people are asking about a potential overturn of Roe — and its impact on Illinois.

Abortion would not become illegal or restricted in Illinois. If Roe v. Wade were to be overturned or chipped away, the matter of reproductive rights would be decided by individual states.

Abortion rights have been firmly ensconced in Illinois law, which has some of the least-restrictive rules in the nation.

[ [Don’t miss] Changing abortion rights: How Illinois’ new law compares with what other states are doing ]

Each year, thousands of women cross state lines to have an abortion in Illinois, according to state data. That number could grow exponentially pending U.S. Supreme Court decisions and new laws in various states.

Nearly 10,000 women traveled from out of state to have an abortion in Illinois in 2020, a roughly 29% increase compared with the previous year, according to the most recent Illinois Department of Public Health data.

The number of women crossing state lines to come to Illinois for the procedure has risen every year since 2014.

Illinois abortion providers say they expect more women will be traveling here from other states for reproductive health care in the future.

“As Illinois continues to break down barriers to health care, we will remain a needed haven in the Midwest,” said Jennifer Welch, president and CEO of Planned Parenthood of Illinois. “We are planning for Illinois’ out-of-state numbers to continue to increase as long as other states are allowed to enact harmful and unconstitutional abortion bans and restrictions.”

[ [Don’t miss] With abortion rights in jeopardy, minority women have most to lose ]

The Center for Reproductive Rights has identified 24 states that would potentially prohibit abortions if Roe is overturned. Most of those states are in the central and southern parts of the country.

“These states and territories are extremely vulnerable to the revival of old abortion bans or the enactment of new ones, and none of them has legal protections for abortion,” the Center wrote in its conclusion for a project called “What if Roe Fell” where they analyzed constitutions, laws, regulations, court decisions and access to abortions.

The 24 states they identified include the 13 states with “trigger laws” — including Missouri and Kentucky — and states with laws that highly restrict abortion.

Students and activists rally outside the DePaul University Loop campus on May 3, 2022, in reaction to the leaked draft decision from Supreme Court that showed their intention to overturn Roe v. Wade. (E. Jason Wambsgans / Chicago Tribune)

Like Illinois, Iowa and Minnesota have protections against abortion bans. The Center for Reproductive Rights found that Iowa and Minnesota’s State Supreme Courts have recognized the right to abortion under the state’s constitution.

While Iowa does have a six-week abortion ban, that ban cannot be enforced because it was ruled unconstitutional by the Polk County District Court.

In Wisconsin, Michigan and Indiana, abortion is not protected under state law, and current restrictions make access to abortion care difficult, the Center for Reproductive Rights found.

Gov. J.B. Pritzker and dozens of other Illinois Democrats gathered at the James R. Thompson Center in the Loop early Tuesday to extol their efforts in recent years to ensure abortion remains legal and accessible in the state and to rally supporters for the potential fights ahead.

“Reproductive rights and bodily autonomy are the most basic, fundamental human rights,” said state Sen. Cristina Pacione-Zayas, a Chicago Democrat. “This is not a drill, this is not a test, nor a dress rehearsal. … This moment is the rallying cry and a defining time that draws a line in history.”

Within minutes of Politico’s report that it had obtained the draft decision, politicians took to social media to weigh in on the news.

Pritzker, a Democrat: “As long as I’m governor, Illinois will stay a beacon for reproductive freedom. We won’t go back.”

Hell no! In Illinois, we trust women. We cannot let their most profound and personal rights be violated. https://t.co/ksvR0vkgw1

Chicago Mayor Lori Lightfoot, a Democrat: “What we’re seeing tonight on Roe v. Wade is a horrendous attack on our fundamental right to choose, and we will fight against it with everything we’ve got.”

What we’re seeing tonight on Roe v. Wade is a horrendous attack on our fundamental right to choose, and we will fight against it with everything we’ve got. You have my word: I will do everything I can to guarantee your right to an abortion.

U.S. Rep. Mary Miller, a downstate Republican: “Our Justices need your prayers to stand up to the radical abortion industry and Defend Life!”

Our Justices need your prayers to stand up to the radical abortion industry and Defend Life!

The unborn have no voice to speak for themselves, we march for them and tonight we must pray for them!

Illinois passed its first abortion statute in 1827. The law intended to outlaw the widespread sale of abortion-inducing drugs.

In 1867, Illinois amended its 1827 law to criminalize attempted abortion by any means, at any point in pregnancy. When the Supreme Court’s Roe v. Wade ruled in 1973 that state laws restricting abortion were unconstitutional, it struck down Illinois’ 1867 law. Illinois state lawmakers in recent years have acted to protect abortion rights and make the procedure more accessible.

Two factions appeared at Chicago Federal Plaza on Feb. 13, 1971. One group, left, rallied for support of legalized abortion and the other rallied against it. (Michael Budrys / Chicago Tribune)

Only a minority of Americans want to overturn Roe vs. Wade. In 2020, AP VoteCast found that 69% of those surveyed wanted the Supreme Court to leave the decision intact.

When it comes to limitations on abortion, public opinion is more mixed. Support for the procedure is strongest when the pregnancy is in the first trimester, and declines after that.

It’s worth remembering that three of the justices who appear poised to overturn Roe were appointed by former President Donald Trump, who did not win the popular vote when he was elected in 2016.

The Associated Press contributed to this report