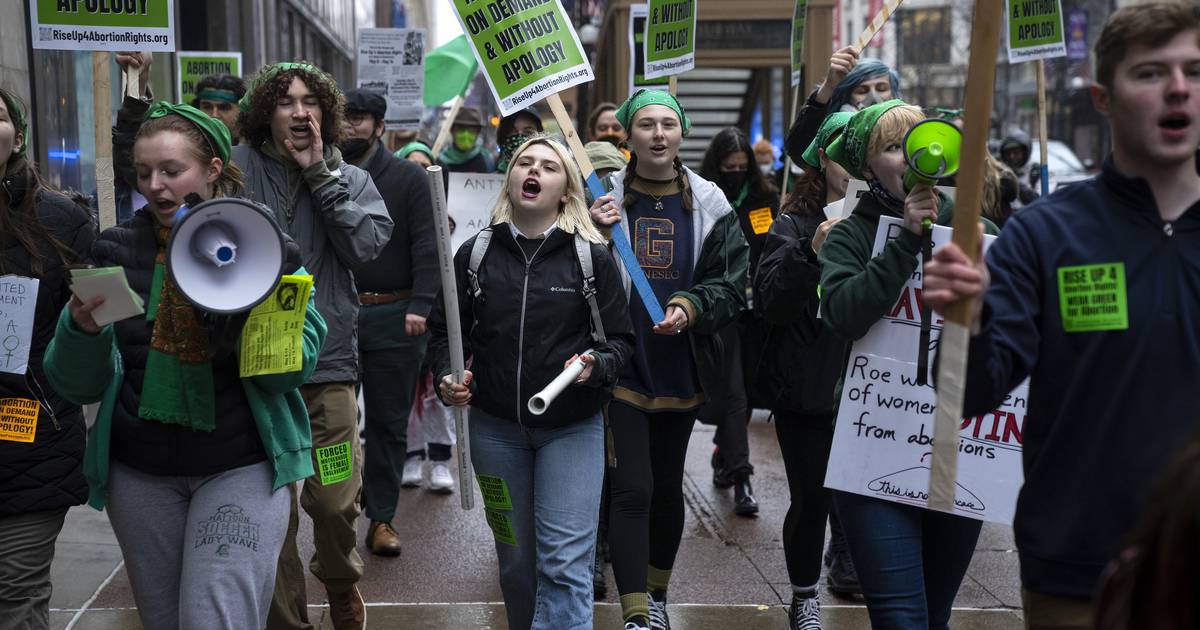 Chicago Abortion Fund Executive Director Megan Jeyifo was at a comedy show when a rapid-fire series of news alerts and text messages lit up her phone: A draft U.S. Supreme Court opinion leaked Monday indicated the majority of justices plan to overturn Roe v. Wade, threatening abortion rights throughout much of the nation.

The nonprofit leader was at first outraged and then sorrowful. But suddenly, also on her phone, she saw that donations were pouring in from donors who were just as angry and terrified at the prospect of waning abortion access around the country.

“We’ve been preparing for this,” said Jeyifo, whose organization funds abortions as well as transportation, lodging, child care and other costs associated with travel for the procedure. “Our language has been ‘when Roe falls,’ not ‘if Roe falls.’”

The landmark 1973 Supreme Court case has established the right to an abortion nationwide for nearly 50 years. But if Roe were to be overturned, the matter of abortion rights would be decided by individual states.

While abortion will still be legal in Illinois — which has ensconced reproductive freedoms in state law — experts anticipate that more than half the states in the nation would ban or significantly chip away at the right to terminate a pregnancy. This includes every state surrounding Illinois.

“It felt like a gut punch,” said Planned Parenthood of Illinois President and CEO Jennifer Welch. “I was stunned that the Supreme Court appears poised to ignore 50 years of settled law.”

Welch predicted that anywhere from 20,000 to 30,000 additional patients could travel to Illinois each year to terminate a pregnancy if abortion rights are overturned.

This is on top of the ever-increasing number of patients who already cross state lines to come here for the procedure. Nearly 10,000 people came from out of state to have an abortion in Illinois in 2020, according to the latest data available from the Illinois Department of Public Health. This was a 29% increase over the previous year, when about 7,500 patients traveled here for the procedure from another state.

The number of abortions here for out-of-state women has risen every year since 2014, according to state health data.

While the news of Roe’s potential demise was shocking, Welch said her agency has been preparing for this possibility for the past five years by increasing the number of health centers, expanding access at facilities, creating a new telehealth program and launching the biggest fundraising campaign in the agency’s history.

“We are proud to say that abortion is still safe and legal in Illinois,” Welch said in a written statement. “This is a devastating blow for the millions of people who will suddenly find themselves in an abortion desert; facing a daunting dilemma — travel hundreds of miles to access an abortion, seek an illegal alternative or carry a pregnancy to term against their will. We will continue to fight so that everyone can access the fundamental reproductive health care they need and deserve — no matter what.”

In Chicago, officials were considering ways to make the areas around abortion clinics safer for women walking in and out, Northwest Side Ald. Carlos Ramirez-Rosa said Tuesday.

He said options might include strengthening city ordinances that create protected zones around clinics where anti-abortion protesters aren’t permitted, or organizing community groups to escort patients to and from the clinic doors.

“With many neighboring states now likely to outlaw abortions, we need to make sure Chicago remains a safe place for women to turn,” Ramirez-Rosa said. “We’ve seen extremists outside these clinics … so it’s incumbent upon us to make certain we’re doing what we can to ensure that safety.”

As for the Chicago Abortion Fund, Jeyifo said her organization already faces a huge increase in need, as many states have in recent years enacted more burdens on abortion access including restrictions on clinics, gestational limits and mandated waiting periods before a patient can have an abortion.

“Our callers have been living in a post-Roe world for decades,” she said. “This is the reality so many people already face.”

In 2018, the organization provided funds for roughly 180 people seeking an abortion; in 2022, more than 500 people on average are calling for financial assistance each month, she said.

In March, those calls for assistance came from 25 different states, she added.

So far, the fund has been able to help every request that’s come in for the past three years, Jeyifo said. But if Roe falls, she worries that demand might start to exceed their budget.

The thought that some patients could be turned away brought tears to her eyes.

“We are already strained,” she said. “I’m thankful for the outpouring of support. But I’m wondering how we sustain it.”

Kevin Grillot, executive director of March for Life Chicago, applauded the rollback of abortion rights protections, which have “led to the deaths of millions of preborn children and caused irrevocable harm to their families.”

“Now is the time to return decision making back to the states,” he said in a written statement. “The majority of Midwesterners support protecting preborn life and should have the right to do so.”

The Supreme Court draft opinion, which was obtained by Politico, states that “Roe was egregiously wrong from the start.” The draft majority opinion was signed by Justice Samuel Alito, and the Supreme Court on Tuesday confirmed its authenticity.

The case at hand was Dobbs v. Jackson Women’s Health Organization, which tested the constitutionality of a Mississippi law that banned abortion after 15 weeks. The draft decision would essentially overturn both Roe and Planned Parenthood v. Casey, another landmark Supreme Court decision affirming abortion rights.

The court is expected to rule on Dobbs v. Jackson over the summer.

Assuming the draft decision stands, Chicago-based Pro-Life Action League Executive Director Eric Scheidler said he was “thrilled at the prospect the people will soon be granted freedom of choice when it comes to setting abortion policy in their state.”

The impact on Illinois, though, will be indirect, Scheidler said.

In 2019, Illinois Gov. J.B. Pritzker signed the Reproductive Health Act, establishing abortion as a “fundamental right” for women statewide. The state has among the most permissive abortion laws in the nation and serves as an oasis for the procedure in the Midwest, where almost all other states are far more restrictive.

But Scheidler expects most adjacent states — particularly Indiana, Wisconsin and Missouri — will enact near total bans on the procedure if given the option.

The already climbing out-of-state abortion rate in Illinois “will skyrocket,” he predicted.

“Soon, in many states, unborn children will be welcomed back into the human family, recognized as our brothers and sisters and protected by law,” he said. “In other states, like my home state of Illinois, these children are under constant threat. Our task now is to bring this expansion of human rights — the fundamental right to life — to every state.”

Richard W. Garnett, law professor at the Notre Dame Law School, said that if Roe and Casey are overruled, the matter of abortion regulation will shift to political and legislative contexts.

He added that he expects this would result in “laws that better reflect the complex views of Americans on this topic.”

“It is important to remember that the Roe and Casey decisions imposed on all 50 states one of the world’s most permissible abortion-law regimes,” he said, “and that those decisions prevent reasonable regulations of abortion that most Americans — including many who support abortion rights — support.”

If Roe and Casey are overturned, Geoffrey R. Stone, law professor at the University of Chicago, said “many women who up until now had a right to an abortion in their own states no longer will.”

While the number of women traveling to have an abortion would rise, so would illegal abortions, he said.

“Which is terrifying, because the world of illegal abortions was a nightmare for women,” said Stone, author of the book “Sex and the Constitution: Sex, Religion and Law from America’s Origins to the Twenty-First Century.”

Dr. Erin King is an abortion provider and executive director of Hope Clinic for Women in Granite City, Illinois, a few miles from the Missouri border.

Just last week, she saw patients from Texas, Louisiana, Tennessee and Alabama. All journeyed to southwest Illinois to have an abortion due to various restrictions in their home states, she said.

“They had to travel, stay a few days and travel back for me to hand them some pills that are safer than most over-the-counter medications,” she said. “Their travel to and from my office was exponentially more dangerous and the expense astronomical to access abortion.”

Even though reproductive rights are generally well protected in Illinois, she predicted the influx of patients from other states will make appointment times and providers more difficult for in-state patients to access.

“The current providers that focus on abortion care have been preparing for years, but there is no way any of us will be prepared for the sheer number of patients that will be trying to access care,” she said. “Patient traffic is already increasing this year and we are seeing patients traveling from much farther distances and with ever increasing funding and travel support needs.”

A few months ago, Hope Clinic and Reproductive Health Services of Planned Parenthood of the St. Louis Region partnered to open the Regional Logistics Center, a centralized location in southern Illinois where patients can get assistance with travel needs like finding transportation, booking lodging and setting up child care.

Case managers there arrange travel, connect patients with funding, help them find a place to stay and overcome other common barriers to accessing abortion care, especially those that come with traveling long distances.

“We knew this opinion was coming and while it’s not official, it brings us one step closer to an impending public health crisis,” said Yamelsie Rodríguez, president and CEO of Reproductive Health Services of Planned Parenthood of the St. Louis Region. “No matter what, with our partners, we will fight for what little is left of abortion access in Missouri and push forward to expand in Illinois where abortion access is protected beyond Roe.”

In downtown Chicago, a small group of protesters stood on the wet ground of Federal Plaza on Tuesday, beating drums and waving flags whipped by the wind.

Some held signs saying, “Abortion on demand & without apology.”

”I am heartbroken that this is where we are,” said Caitlyn Hana, 27, of the Hyde Park neighborhood. “I am scared for the future. Not only for women but everyone in this country if we go backward.”