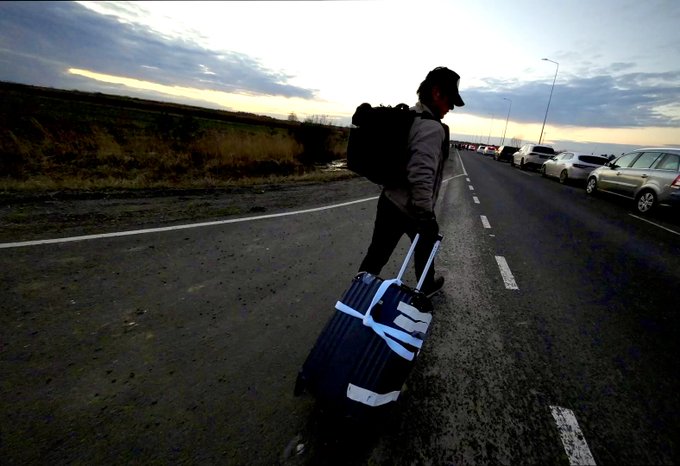 Days after visiting the Ukrainian capital Kyiv to film scenes for his documentary on Russia’s invasion, Hollywood actor-director Sean Penn found himself among thousands of refugees fleeing to Poland, joining the exodus on foot.

Also read: Former Miss Ukraine may have stolen hearts, but is she really fighting Russian forces? No she is not, explains her Instagram post

Penn, 61, posted a photo to his Twitter feed on Monday showing the movie star wearing a backpack and toting a piece of luggage on wheels as he trudged along the shoulder of a road beside a line of cars stretching into the distance.

Myself & two colleagues walked miles to the Polish border after abandoning our car on the side of the road. Almost all the cars in this photo carry women & children only, most without any sign of luggage, and a car their only possession of value. pic.twitter.com/XSwCDgYVSH

“Myself & two colleagues walked miles to the Polish border after abandoning our car on the side of the road,” Penn said in a caption tweeted with the picture. “Almost all the cars in this photo carry women & children only, most without any sign of luggage, and a car their only possession of value.” The tweet did not explain why the Academy Award-winning actor and his companions were forced to abandon their vehicle.

A spokesperson in Los Angeles, Mara Buxbaum, told Reuters by email on Tuesday that Penn had “made it out of Ukraine safely.” She declined to answer other questions about his whereabouts or the circumstances of his departure from Ukraine.

Penn was in Kyiv last Thursday attending a press briefing at the office of President Volodymyr Zelenskiy on the first day of Russia’s invasion, recording footage for a documentary chronicling the crisis, Zelenskiy’s office said in a statement at the time.

“Sean Penn is among those who support Ukraine in Ukraine today. Our country is grateful to him for such a show of courage and honesty,” the statement said.

It said Penn had interviewed Ukrainian political and military figures as well as journalists as part of the production, for which he initially visited Ukraine in November.

In a statement last week, the actor acclaimed for Oscar-winning roles in “Mystic River” and “Milk” praised the Ukrainian people as “historic symbols of courage” and called Ukraine “the tip of the spear for the democratic embrace of dreams.”

“If we allow it to fight alone, our soul as America is lost,” Penn wrote.

Penn, whose directorial credits include “Into the Wild” and “The Crossing Guard,” is also known for his political activism and involvement in various humanitarian causes, including relief efforts for victims of Hurricane Katrina, the Haiti earthquake of 2010 and Pakistan floods in 2012.

He made headlines in 2016 when Rolling Stone magazine published an interview Penn had secretly conducted with Mexican drug lord Joaquin “El Chapo” Guzman at his jungle hideout prior to the arrest of the cartel boss.

Penn is producing the Ukraine documentary for Vice Studios, a U.S.-Canadian digital media and broadcasting company, according to Hollywood trade publication Variety.