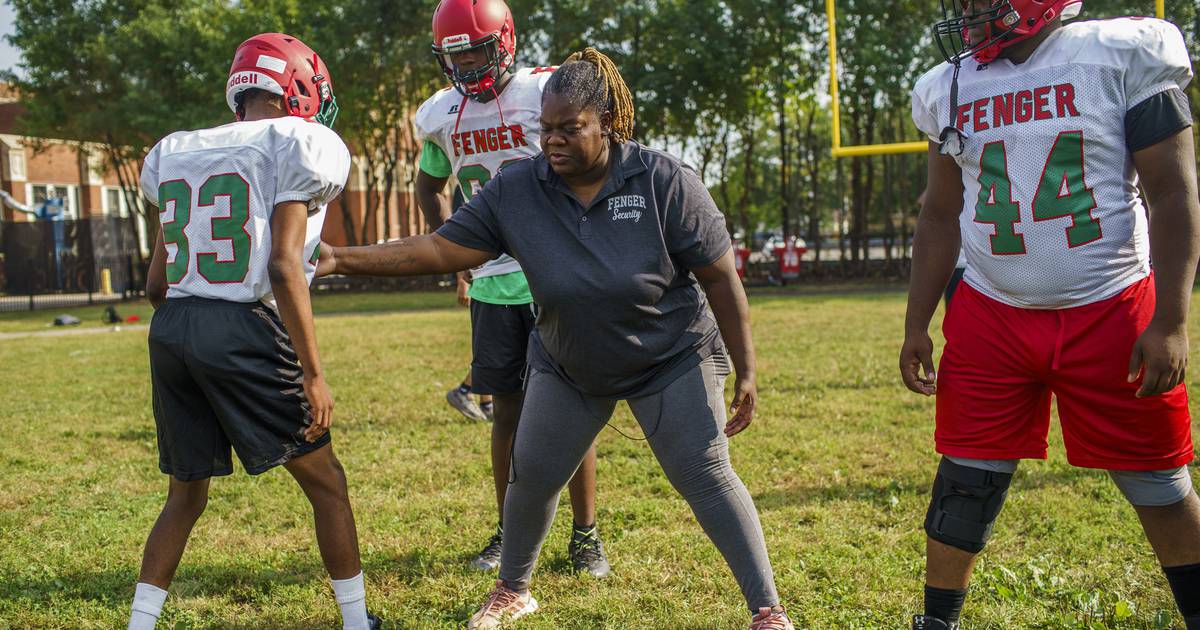 When Fenger’s Jouscelyn Mayfield and DuSable’s Konesha Rhea were first coaching on opposite sidelines, it was “a battle of voices.”

Mayfield was a coach for her son’s youth football team and Rhea was the opposing head coach.

“This time around I’m looking forward to it. It’s going to be a battle of defenses because we’re both defensive-minded. We just have to see how our offenses can execute.”

Mayfield and Rhea will find each other on opposing sidelines once again Thursday at Gately Stadium.

The two never imagined that nearly 10 years after their youth football matchup they’d be on opposite sidelines again, but Thursday’s game will be historic. According to the Illinois High School Association, Mayfield and Rhea will be the first two Black women to go head-to-head as head football coaches in history. Each is looking for her first win of the season.

We believe it is even bigger than that!

After consulting with the @NFHS_Org and the other state high school associations around the country, we will believe that tonight’s contest will be the first-ever varsity high school football game featuring two female head coaches. https://t.co/xnrHKrIpl8

Mayfield, or Coach Nikki as her players call her, was born and raised in Cabrini-Green. Though she always had been a fan, her deeper interest in football started when her eldest son played for the Canaryville Lions. She wanted to understand what was going on because everything seemed complicated.

“I just wanted to know, ‘What did that mean?’ so I would always ask his coach,” Mayfield said. “He was like, ‘You’ve got a lot of knowledge, you should come help me coach.’ And I was like, you don’t want no girl coaching, you know? Because it’s almost unheard of.”

Through her job as a security officer at Fenger, Mayfield already was well-known by students, so she had no problem winning over the boys on the team when she was named head coach in 2021. Because she wore her whistle around the building, she said some of the kids had been asking if she would coach the team.

Rhea, or Coach K, has a different football background.

Growing up south of Chicago, Rhea never thought football was in her long-term future. She assisted Jen Welter, the first woman to coach in the NFL. And she played semi-pro football with the Chicago Force.

Rhea was with the Force for two seasons before tearing her ACL on her 35th birthday. After the injury, Rhea’s daughter pleaded with her not to return to playing.

Rhea found her way back to football through coaching. A former co-worker mentioned to Rhea that her grandson played for the Bridgeport Hurricanes and they needed coaches.

“From day one, I fell in love with teaching kids how to play football,” Rhea said.

She remained with the Hurricanes until she had another child in 2017. With a new baby, there was no time to coach.

But Rhea’s friend Derek Crowder, who was coaching at DuSable, suggested: “Well, you’re yelling defenses from the bleachers. Why don’t you give it a shot on the high school level and just come to the staff?”

She joined the DuSable staff as defensive coordinator in 2019 and was offered the head coaching position in 2021.

Despite the competitive nature of Thursday’s matchup, Mayfield and Rhea are friends and consider themselves part of a sorority.

“It was just another game. This is Coach K! That’s my sister!” Mayfield said of her reaction when learning the game would have some significance. “The goal is to have a historic win for each program.

“But just being where we are now? Both schools, both of us win. We’re setting the tone for something that’s greater and bigger for young women that are coming after us.”

Rhea said their friendship and journeys send a message to young women.

“Coaching and sports is for everyone,” she said. “A woman can coach a male-dominated sport just like a man can coach women’s sports. It’s all about your passion and determination and you working hard at it.”