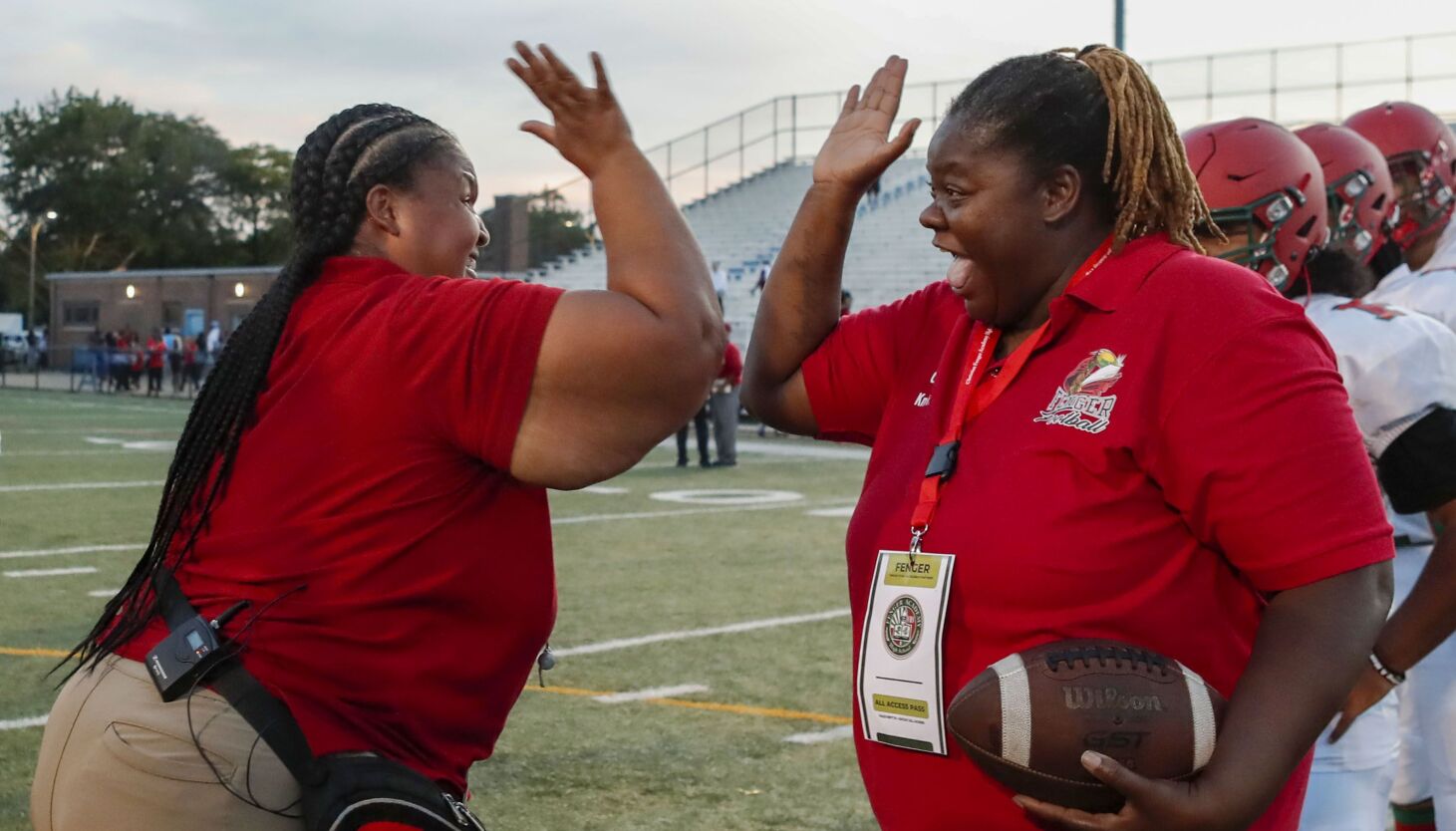 Blue Division football games on weekday afternoons tend to fly under the radar.

But this particular matchup between Fenger and DuSable on Thursday afternoon was different. Trucks for every TV station in town were parked in the Gately Stadium lot more than an hour before kickoff. Public League sports staffers scurried around, setting up banners and backdrops for TV reporters’ live stand-ups.

The two coaches took time out from their pregame routine to do interviews because, well, they were the story.

Rhea, in her second season at DuSable, and Mayfield, in her first year at Fenger, are the friendliest of rivals after coming up through the youth coaching ranks on the South Side. They hugged before the game, after a coin toss conducted by a female official, Etta McChristian. And they hugged after Fenger rolled to a dominating 50-0 victory.

While Mayfield was taking part in yet another round of interviews with sophomore Rodney Evans — a sturdy 5-10, 260-pounder who scored three touchdowns in his first-ever game at quarterback — Rhea stood off to the side, beaming.

“A horrible loss,” Rhea said. “But it’s a win for the sport, a win for girls and women looking to coach football.”

Mayfield said the magnitude of the day didn’t really register till the Star Spangled Banner was playing just before kickoff.

To share the moment with Rhea meant everything to Mayfield.

“It’s an honor,” Mayfield said. “She’s a legend. Me? I’m just me, but she’s the one that first broke down those barriers.”

Rhea first started breaking down barriers when she was growing up in Harvey.

“I was a tomboy,” she said, and she played football with the neighborhood boys.

Rhea wanted to play football at Thornridge when she got to high school, but her father nixed the idea. She did serve as team manager as a senior.

Years later, she saw a story on TV about the Chicago Force, a women’s team run by current Crete-Monee coach John Konecki, and decided to try out.

“I was like ‘Rudy,’” she said, referring to the story of the most famous college football walk-on ever.

Konecki saw early on that Rhea had the potential to be a good coach. Besides being able to translate complex football concepts to women who were exceptional athletes in other sports, Rhea had mastered the human side of coaching.

“You can’t do this job if you don’t care about people,” Konecki said. “That was always evident … she loves people and she wants them to be the best possible version of themselves. That comes across immediately.”

Rhea’s playing career ended when she tore her ACL on her 35th birthday. But her football days were far from over.

She helped out with a men’s semi-pro team. And then in 2013, a coworker’s grandson was playing youth football with the Bridgeport Hurricanes, who needed some coaching help. Rhea jumped in, attending clinics and soaking up football and coaching tips.

A few years later, her path to high school coaching opened up when a new staff was hired at DuSable. The school and the program were both in a state of flux. The original DuSable, which opened in 1935, closed in 2016, three years after the historic building was designated a Chicago landmark.

The new coaches asked Rhea to join them. Their joking pitch was: “Why don’t you come on as defensive coordinator since you’re screaming from the stands anyway?”

Rhea was defensive coordinator for the Panthers in 2019 and the program didn’t play in the pandemic-delayed spring 2021 season. By the time the fall season rolled around last year, the previous head coach had moved on and Rhea was promoted to take his place.

She is in the midst of a multi-year rebuilding program. The current team, which is 1-3, has four seniors, two juniors and a bunch of sophomores and freshmen.

Tight end/defensive end Michael Jemison is one of the seniors. He appreciates the effort Rhea puts into her job.

“She can be sweet sometimes. … Sometimes she can be harsh. But sometimes we might need it, to be disciplined, But overall she’s nice.”

‘How could you not help her?’

Mayfield’s road to coaching started while watching her son play youth football with the Canaryville Lions. She wanted to understand the coaches’ decisions and philosophy, and before long she was one of the coaches herself.

Like DuSable last year, Fenger was in need of a coach this season. Mayfield already worked at the school as a security officer, and she was recruited to coach by both school officials and some of the players, who were aware of her youth football background.

At first, Mayfield — who still coaches two youth teams with the Chicago Southside Wolfpack — wasn’t sure she wanted to take on another coaching gig.

“I already had a lot on my plate,” she said. “The principal was like, ‘Coach, I need you to coach our boys,’” Mayfield said.

Like DuSable — which has an enrollment of 318 between its two schools — Fenger is a small school with 232 students. It’s also gone through a cycle of coaching changes and low numbers; there are no freshmen in the program this season.

But Mayfield does have one of the South Side’s most respected coaches to lean on: Ernest Radcliffe, who founded the Wolfpack 25 years ago and also is the longtime baseball coach at Morgan Park.

He’s glad to help Mayfield as an assistant. “She brings a lot of energy and excitement,” Radcliffe said. “I’m so proud that she’s had this opportunity. … She’s a tremendous personality, a wonderful coach. How could you not help her?”

The TV cameras will move on, but Rhea hopes the spotlight won’t fade on programs like hers and Mayfield’s, which also is 1-3 this fall.

“It means so much to know that the person you’re going against is your sister,” she said. “My sister and I are making history together.

“It couldn’t get any better.”