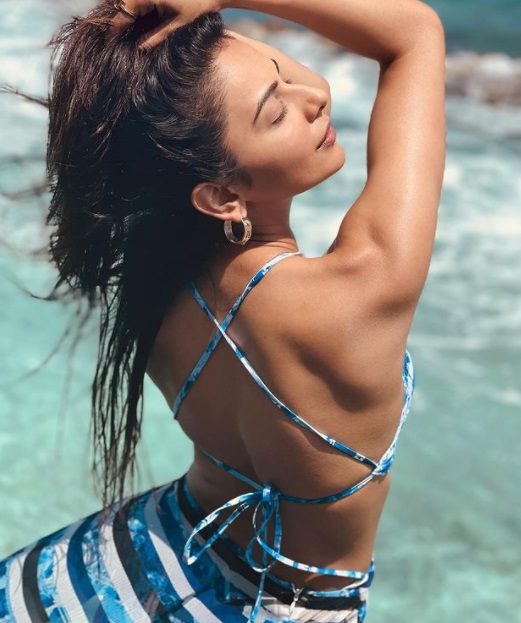 Actress Rakul Preet Singh is vacationing in Maldives and she is regularly updating her fans by posting pictures from the holiday. A sizzling shot from the beach made its way to our feed on Monday, and its caption defines the essence of her holiday. Rakul wrote, “Sometimes in the waves of change we find out true direction.”

While that was a solo shot, social media hints the actress is enjoying her time with boyfriend and film Jackky Bhagnani.

Jackky too shared a picture form the island nation and captioned it, “Happiness comes in waves! High tides and good vibes.”

The couple is twinning in this picture:

It was last year on Rakul Preet Singh’s birthday that the two made their relationship official Instagram. Rakul wrote, “You have been my biggest gift this yea! Thank you for adding colour to my life, thank you for making me laugh non-stop, thank you for being you. Here is to making more memories together.”

Meanwhile, Jackky also posted a collage from his time on the island. Here’s the reel:

Rakul too shared some stunning posts. On Sunday she shared a happy photo of her ‘island life’, which she captioned, “Smile away! It’s free therapy.”

Take a look at the photo:

She began her weekend with this dreamy picture as she chekd into Maldives. Rakul wrote, “We dream in colours borrowed from the sea.”

On the work front, Rakul Preet Singh has Runway 34 in the pipeline, a thriller-drama in which she plays a pilot. The film also stars Amitabh Bachchan and is directed-produced by Ajay Devgn. She also has Doctor G with Ayushmann Khurrana in the lead opposite her. Then there’s Production 41 with Akshay Kumar and Ronnie Screwvala’s ‘Chhatriwali’, which also star Sumeet Vyas.