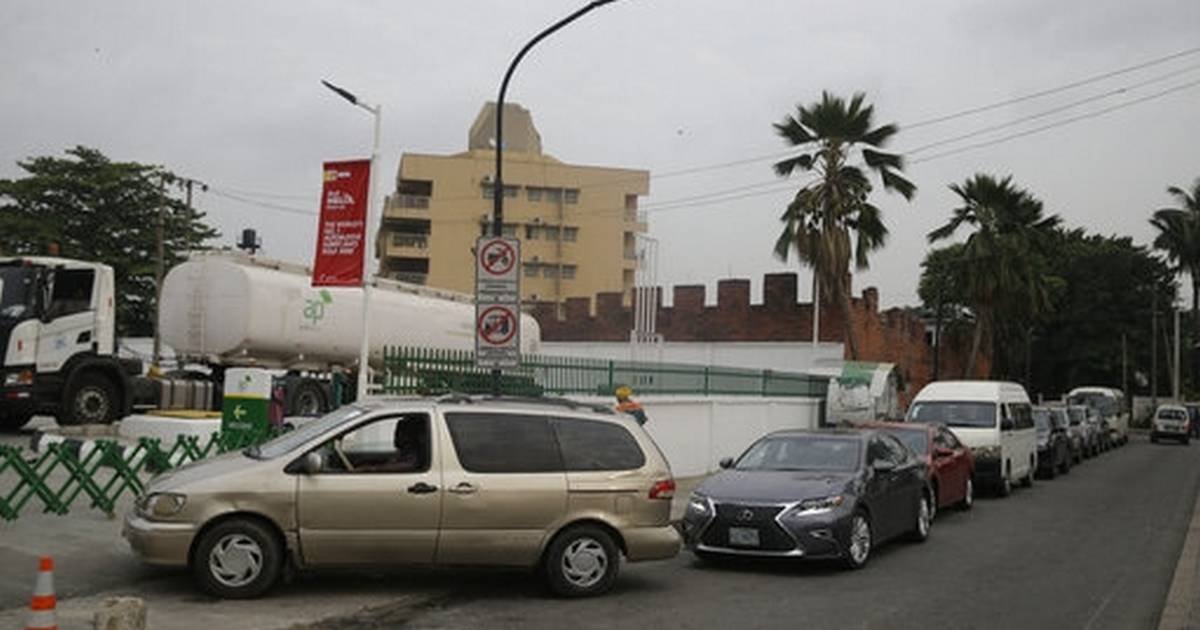 Authorities blamed the scarcity of fuel on the withdrawal of adulterated gasoline which the West African nation’s national oil company said was found to have been imported by four oil marketers.

In the aftermath, the oil regulator has been unable to sustain distribution to retail outlets nationwide.

Across Nigerian cities on Friday, lines spilled from gas stations into major roads as motorists spent hours and nights waiting to fuel their cars.

‘I slept with mosquitoes (at the station) ‘ because there was no other option,’ said Chijioke Ngene, a taxi driver and father of six who said he spent 14 hours through the night until he could buy fuel from a gas station in Abuja, Nigeria’s capital.

Gasoline shortages are common in Nigeria even though it is one of Africa’s top crude oil producers, pumping an average of 1.27 million barrels per day in November, according to the Organization of Petroleum Exporting Countries. Nigeria’s oil exports contributed more than 7% to its economic growth rate of 3.4% in 2021, the statistics agency reported this week.

But the country still depends on imported fuel as a result of under-performing refineries. Past fuel shortage crises have been caused by several factors including frequent strikes and the hoarding of the commodity by marketers in response to government policies.

The Nigerian government has said a ‘major investigation to unravel everything’ has been launched to resolve the latest crisis.

Nigerians are groaning over the fuel shortage. Car owners are spending more time at filling stations than on the road, transport fares have skyrocketed and workers are finding it increasingly difficult to get to their offices.

Some operators are making fast money as they sell gasoline to desperate car owners for almost triple the original pump price.

In Lagos, Nigeria’s largest city, and Abuja the public transport systems are being overstretched with fewer vehicles able to ferry commuters.

‘Bolt (a ride-hailing platform) charged me Naira 5,000 ($12) this morning as fare to the office this morning from the usual Naira 2,000 ($5) I used to pay,’ said Enitan Omolola who works as a sales clerk in Lagos. Many are unable to afford the increasing fares and have to struggle for seats in the public buses or walk long distances to work at best.

A national workers’ union is threatening to strike, increasing pressure to resolve the crisis. The main opposition party has also asked Nigerian President Muhammadu Buhari, who is also the nation’s petroleum minister, to resign that post.

Though the state-run Nigerian National Petroleum Company has said it has 1 billion liters of gas in stock and another 2.3 billion liters scheduled for delivery before the end of the month, its managing director, Mele Kyari, admitted in a meeting with Nigerian lawmakers that the fuel shortage ‘is completely unavoidable (and) we didn’t see it coming.’

The company has directed gas stations under its control to begin 24-hour sales though analysts argue the measure is not sustainable and not enough.

Gas station workers are also finding it difficult to cope with the surge in demand. Asked about the impact of working all night and into the next afternoon at one of the gas stations in Abuja, Eniola Ossai, an attendant, responded with a smirk: ‘What do you want us to do? It’s a serious situation,’ he said.

Okorie Ikechukwu, 35, is one of the hundreds of taxi drivers operating in Abuja whose earnings have continued to drop as a result of the crisis. From earning Naira 7,000 ($17) a day, he now returns home to his family of three after the day’s work with between Naira 2,000 ($5) and Naira 3,000 ($7) he said, spending less time working and more time at gas stations.

‘It has been terrible,’ he said of the impact of the crisis on his business. ‘It is only God that is sustaining us. I am begging the government to help us.’