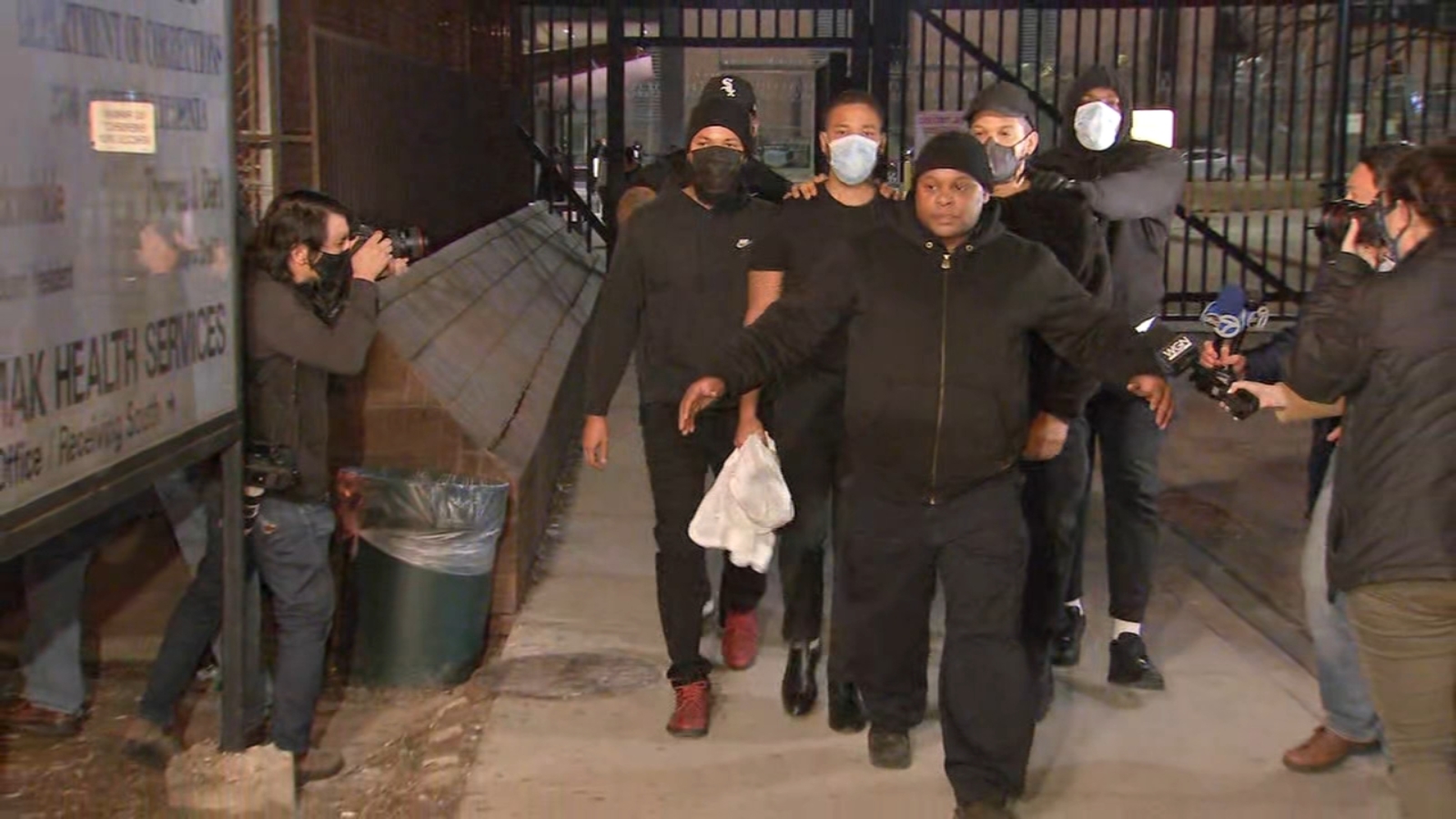 CHICAGO (WLS) — Jussie Smollett was released from Cook County Jail Wednesday after an appeals court agreed with his lawyers that he should be released pending the appeal of his conviction for lying to police about a racist and homophobic attack.

The ruling came after a Cook County judge sentenced Smollett last week to immediately begin serving 150 days in jail for his conviction on five felony counts of disorderly conduct for lying to police. The appeals court said Smollett could be released after signing a personal recognizance bond of $150,000, which did not require any money be paid.

The 39-year-old walked out of the jail shortly after 8 p.m., past a gaggle of gathered media and accompanied by security and two of his siblings, without saying a word. His defense team lauded the appellate court’s decision to release him, but did not say where he would go or what he would do while they continue to work on his appeal.

It was not known if Smollett would have to stay in Cook County or Chicago; previously, Judge James Linn had said during his post-jail probationary period he would be allowed to leave the state and check in with his probation officer remotely.

“It’s unbearable for family members to see loved one going through this, just to let him get out of that situation, I’m grateful to God for it,” Smollett’s brother, JoJo, said.

Smollett spent six nights in jail. In that time, his attorneys said the actor did not eat anything, but only drank water.

WATCH: Legal analyst weighs in on how Jussie Smollett got out of jail

His attorneys said the actor broke down when they gave him the news he’d be freed.

“He pushed his hands on the glass and he was, his eyes got teary and I’ve never seen that, because he’s been very strong in there,” said attorney Nenye Uche. “And he said, ‘I nearly lost hope in our constitutional system.'”

Smollett’s attorneys had argued that he would have completed the sentence by the time the appeal process was completed and that Smollett could be in danger of physical harm if he remained locked up in Cook County Jail.

Smollett was sentenced to 30 months’ probation for lying to police about staging a hate crime attack against himself in Chicago, with the first 150 days of the sentence in Cook County Jail. He was released after less than a week.

“I think we’re here because an appellate court realized this was the right thing to do. I hope everyone realized that the persecution that went on in that courthouse was absurd,” said attorney Shay Allen.

The court’s decision marks the latest chapter in a strange story that began in January 2019 when Smollett, who is Black and gay, reported to Chicago police that he was the victim of a racist and homophobic attack by two men wearing ski masks. The manhunt for the attackers soon turned into an investigation of Smollett himself and his arrest on charges that he’d orchestrated the attack and lied to police about it.

The investigation revealed Smollett paid two men he knew from work on the TV show “Empire” to stage the attack.

A jury convicted Smollett in December on five felony counts of disorderly conduct – the charge filed when a person lies to police. He was acquitted on a sixth count.

Judge Linn sentenced Smollett to 150 days in jail, and with good behavior he could have been released in 75. His attorneys argued by the time the appeal was decided he would have completed his jail sentence.

“The appellate court will take its time,” said ABC7 legal analyst Gil Soffer. “It will consider the briefs that are submitted to it and will make a judgement about two things: one, should it reverse the conviction? And two, even if the conviction stands, was the sentence appropriate?”

Cook County Judge James Linn also ordered Smollett to pay $120,106 restitution to the city of Chicago and a $25,000 fine.

Moments after learning he’d be heading straight to jail, Smollett declared “I am not suicidal!” and “I did not do this!” with one fist in the air as he was taken into custody and removed from the courtroom.

Linn excoriated Smollett prior to handing down his sentence for what he referred to as “misconduct and shenanigans.”

“I’m going to tell you Mr. Smollett, I know that there is nothing that I will do here today that will come close to the damage you’ve already done to your own life,” Linn said.

In considering the sentence, Linn said Smollett’s “extreme” premeditation of the crime was an aggravating factor. He also said the actor had denigrated the experiences of real hate crime victims, calling him a “charlatan” and a liar.

“You got on the witness stand. You didn’t have to. You did. You certainly had a right to. But you committed hour upon hour upon hour of perjury,” Linn said.

After court, Smollett’s family was visibly upset, expressing disappointment that Smollett received jail time and continuing to defend his innocence.

“I watched my brother go from being a complete victim, which he still is. He was attacked, and he is now going to jail for being attacked,” said Jocqui Smollett, his youngest brother. “He is a survivor and he has been completely mistreated. This has to stop!”

“I have never seen, in my entire career as an attorney, and none of the other attorneys here have ever seen a situation in which a Class 4 felony gets the same treatment as a violent offense,” said defense attorney Nenye Uche.

After a long investigation and years in court, Smollett was convicted of five of six felony counts of disorderly conduct for lying to police. He faced a maximum sentence of three years in prison for all counts.

“These are very low-level crimes and it would be extraordinary in a normal case for someone with no meaningful criminal history to face jail time on these crimes, but this is not the normal case,” said ABC Legal Analyst Gil Soffer.

Soffer said if Smollett violates the terms of his release, he could go back to jail, but that’s not likely.

Actor Samuel L. Jackson and his wife, actress LaTanya Jackson, also wrote the judge a letter, saying in part, “I humbly implore you to please find an alternative to incarceration.”

“We are very happy with the ruling made by the Illinois District Appellate Court. We are pleased that sensationalism and politics will be put aside and we can finally have an intellectual discussion about our laws with our esteemed appellate court.
“Three years ago, Jussie and the State of Illinois reached a deferred prosecution agreement in which he paid a ten thousand dollar fine and performed community service. As a result, the case was dismissed.
“To be recharged and prosecuted for the exact same thing, a second time, is not just morally wrong, but certainly double jeopardy and thus unconstitutional. Especially as it concerns an innocent man.”