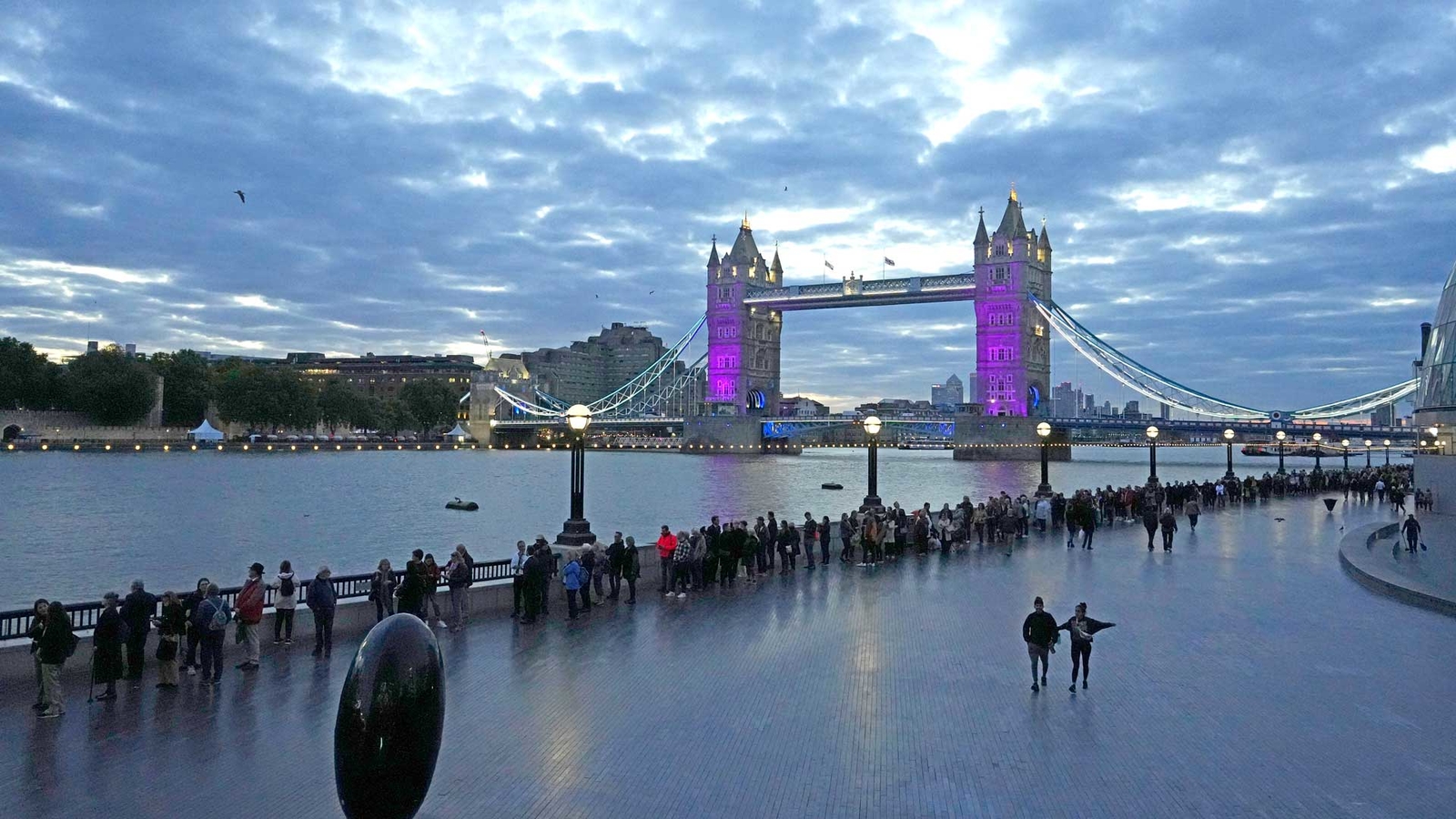 LONDON — People are being told not to join the line to view Queen Elizabeth II’s coffin after a surge in numbers.

British officials said Friday morning that the organized line was at capacity and no one will be allowed to join it for at least six hours.

The line stretched for 5 miles (8 kilometers) from Parliament to Southwark Park in south London.

People at the back of the line faced a 14-hour wait to reach the front.

The government says the park is now full and entry to the queue is being “paused.”

It said: “Please do not attempt to join the queue until it re-opens.”

The pause comes with more than 500 portable toilets available and some 1,000 stewards and marshals working at any given time.

Meantime, King Charles III and Camilla, the Queen Consort, have arrived in Wales for an official visit.

They went Friday to a service at Llandaff cathedral in Cardiff. They were later due at the Welsh parliament and Cardiff castle.

For more than 50 years up to his mother Queen Elizabeth II’s death last week, Charles was the Prince of Wales, a title that has now passed to his son, Prince William.

The royal couple previously visited to Scotland and Northern Ireland, the other nations making up the United Kingdom, following last week’s death of Queen Elizabeth II at age 96.

Later Friday, the new king is scheduled to receive faith leaders at Buckingham Palace in London before joining his siblings for a vigil around the queen’s coffin in Westminster Hall.

Preparations are continuing for the queen’s state funeral in the British capital on Monday, when royalty and heads of state from around the world are expected to be among the 2,000 people attending the service in Westminster Abbey.

The Duke and Duchess of York at the christening of their daughter Princess Elizabeth in 1926. (Universal Images Group via Getty Images)

King Charles III and Camilla, the Queen Consort, were due to visit Wales on Friday.

They were due in Cardiff for a service at Llandaff cathedral, later going to the Welsh parliament and Cardiff castle.

They previously visited to Scotland and Northern Ireland, the other nations making up the United Kingdom.

HOW LONG WILL THE QUEEN LIE IN STATE?

WHAT WILL PEOPLE SEE?

The closed coffin is draped with the Royal Standard, a flag representing the sovereign and the U.K. It is adorned with royal regalia including the orb, the sceptre and the bejewelled Imperial State Crown – the same one the queen wore for her 1953 coronation.

The coffin is placed on a catafalque, or a raised platform, in the center of Westminster Hall. Royal guards in plumed hats and ceremonial uniform will stand 24 hours a day at each corner of the platform.

When the coffin was in Scotland earlier this week, it was topped with the Crown of Scotland and a wreath of white flowers.

The queen’s coffin is constructed out of English oak, lined with lead and was made decades ago, experts say.

Sarah Hayes, manager for the Coffin Works museum in Birmingham, England, says former Prime Minister Winston Churchill, the queen’s husband Prince Philip and Princess Diana had such coffins made for them, she said.

“It’s to preserve the body for as long as possible, it’s really about slowing down the process of decomposition,” she said. This is especially important for the queen because her coffin will be eventually placed in a church, not buried in the ground, she added.

The coffin is made of oak from the royal family’s Sandringham Estate according to royal tradition, Hayes said.

British officials have published two waiting routes along the River Thames that the public need to join before they can enter Westminster Hall. The main queue begins on the Albert Embankment and stretches east for miles past the London Eye, the Tate Modern and Tower Bridge. There is a separate, accessible route that people who need it can join from the Tate Britain museum.

Mourners have been warned about long waits, possibly overnight. Hundreds of extra toilets and water fountains will be placed along the route, and some venues along the way, including Shakespeare’s Globe, will open around the clock to provide refreshments and rest breaks. Airport-style security checks are in place near the front of the line before people can enter Parliament.

The lying in state takes place at Westminster Hall, a 900-year-old building with an impressive timber roof. Built in 1097, it’s the oldest surviving building of the Palace of Westminster.

The medieval hall has been at the heart of British history for a millennium: It was where numerous kings and queens hosted lavish coronation banquets, and where Guy Fawkes and Charles I were tried in the 17th century. More recently, ceremonial addresses were presented in the hall to Elizabeth during her silver, golden and diamond jubilees.

WHO GETS TO LIE IN STATE?

In the U.K., lying in state is reserved for the sovereign, queen consorts, and sometimes prime ministers.

Queen Mary, King George VI and King George V were among royals who lay in state at Westminster Hall. Winston Churchill was the only British prime minister to have a lying-in-state ceremony in the 20th century.

The last person to lie in state in Britain was Elizabeth’s mother, known as the Queen Mother. Some 200,000 people paid their respects to her over three days when she died in 2002.

WHEN DID THE TRADITION START?

The tradition of lying in state stretches back to the 17th century when Stuart monarchs lay in state for a number of days.

Edward VII set the modern tradition of royal lying in state in Westminster Hall. He lay in state in 1910.

WHERE IS THE QUEEN’S FINAL RESTING PLACE?

After the state funeral, the coffin will be taken to Windsor, about 20 miles (32 kilometers) west of London. The queen will be laid to rest in the King George VI Memorial Chapel, within St. George’s Chapel at Windsor Castle, where her mother and father were interred and her sister Princess Margaret’s ashes were placed.

Prince Philip’s coffin, which is currently in St. George’s Chapel’s Royal Vault, is expected to be moved to the memorial chapel to join the queen’s.

St. George’s is where many of Britain’s royals were baptized, married and buried throughout history. It has long been the resting place for the royals, and 10 former sovereigns were buried there.