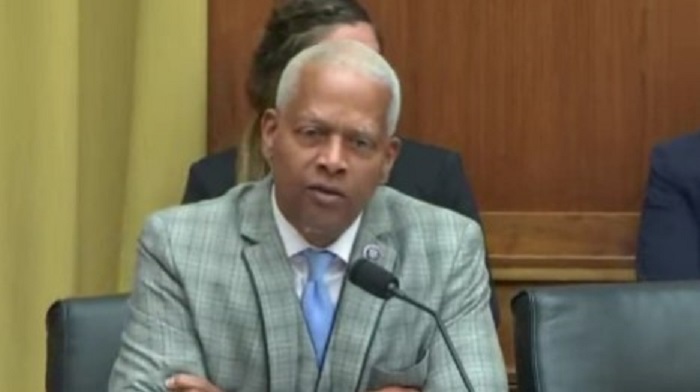 Representative Hank Johnson scorned parents protesting at local school boards as “MAGA Republicans” and compared them to violent rioters during the January 6 riot at the Capitol.

Johnson’s (D-GA) comments were part of a hearing by the House Judiciary Committee Wednesday to discuss a resolution requesting President Biden provide documents pertaining to a memo from Attorney General Merrick Garland back in October of 2021.

The memo was about the FBI addressing parents who ‘pose a threat’ at school board meetings after a controversial letter by the National School Boards Association (NSBA) compared concerned parents to domestic terrorists.

As with any good Democrat argument, Johnson’s commentary began with a lie.

“January 6, 2021, will never be forgotten, an infamous day in American history. MAGA Republicans descended upon the Capitol, engaged in an insurrection. They occupied the Capitol,” Johnson said.

Sign up to receive the latest political news, insight, and commentary delivered directly to your inbox.

“Five people were killed, hundreds injured, including hundreds of Capitol Hill police officers attacked and bludgeoned,” he added. “It was a day that we’ll never forget.”

Except, that isn’t true.

The only person who was actually killed that day was unarmed Air Force veteran Ashli Babbitt, who was shot by a Capitol Police officer. Several others died from non-violent causes.

Johnson then directly equates the events of January 6 to parents protesting extreme gender ideology and critical race theory at school board meetings.

“It was a coordinated attack happening across the country,” Johnson added without evidence. “Americans won’t forget about it. School board members, teachers, administrators, subjected to violence, threats of violence, harassment, intimidation.”

This is an appalling comparison.https://t.co/UdkM9i3P81

Claims There Was No Coordination

To simply cast aside any criticisms from parents at school board meetings as a ‘coordinated attack’ by fringe elements of the far-right is reckless and unintelligent.

Hank Johnson went on to claim there was “not one scintilla of evidence” that the Biden administration had coordinated with the NSBA over the letter regarding parents.

The final letter requested an investigation into whether or not confrontations from outraged parents regarding mask mandates or Critical Race Theory (CRT) curricula amounted to a violation of the Patriot Act.

The NSBA suggested at the time that “the classification of these heinous actions could be the equivalent to a form of domestic terrorism and hate crimes.”

But, as The Political Insider noted in November of 2021, internal emails showed that the NSBA coordinated heavily with the White House over the letter.

The NSBA had discussed the issues with the White House “for weeks” before sending the letter, according to one report.

Two weeks prior to the release of the controversial letter, according to an emailed memo, “there had been a meeting with White House staff … and that NSBA was preparing to send a letter to the President.”

For perspective this is the guy who thought the island of Guam would capsize if we put too much military equipment on one side… so it’s not at all surprising he’s this dumb. https://t.co/RAg9AMz2Ve https://t.co/sVqm5FfZm6

The Georgia lawmaker once famously asked during a House Armed Services Committee hearing if the island of Guam might capsize if too many people were on it.

“My fear is that the whole island will become so overly populated that it will tip over and capsize,” Johnson said to Adm. Robert Willard, head of the U.S. Pacific fleet at the time.

Willard, seemingly taken aback for a brief moment then replied, “We don’t anticipate that.”

This is the video that Trump Jr. is referencing where Democrat Rep. Hank Johnson believed that the island of Guam would “tip over and capsize” if too many people were on the island. pic.twitter.com/69tUluRKF1 https://t.co/Lx9I37KPWB

Johnson would later suggest he was simply joking and using his “sense of humor” with the comment.

He once lamented that budget cuts would lead to a “world without balloons.”

Johnson would also be forced to apologize after making a bizarre analogy involving “midgets” on the House floor in 2012.

“I was thinking to myself earlier today, what happens when you put in a cage fight a giant with a midget?” Johnson said then.

“Well, the midget will not win the fight. I’m going to tell you that. Why? He just doesn’t carry enough weight to do so. But if you put 30 midgets in with that giant, then the midgets have a chance,” he added.

If Hank Johnson could somehow muster up energy to form a coherent thought, he might have a chance.

He might not make comments comparing parents to rioters, wondering if an island could tip over, and having to apologize to the “Little People of America.”

Now is the time to support and share the sources you trust.
The Political Insider ranks #3 on Feedspot’s “100 Best Political Blogs and Websites.”