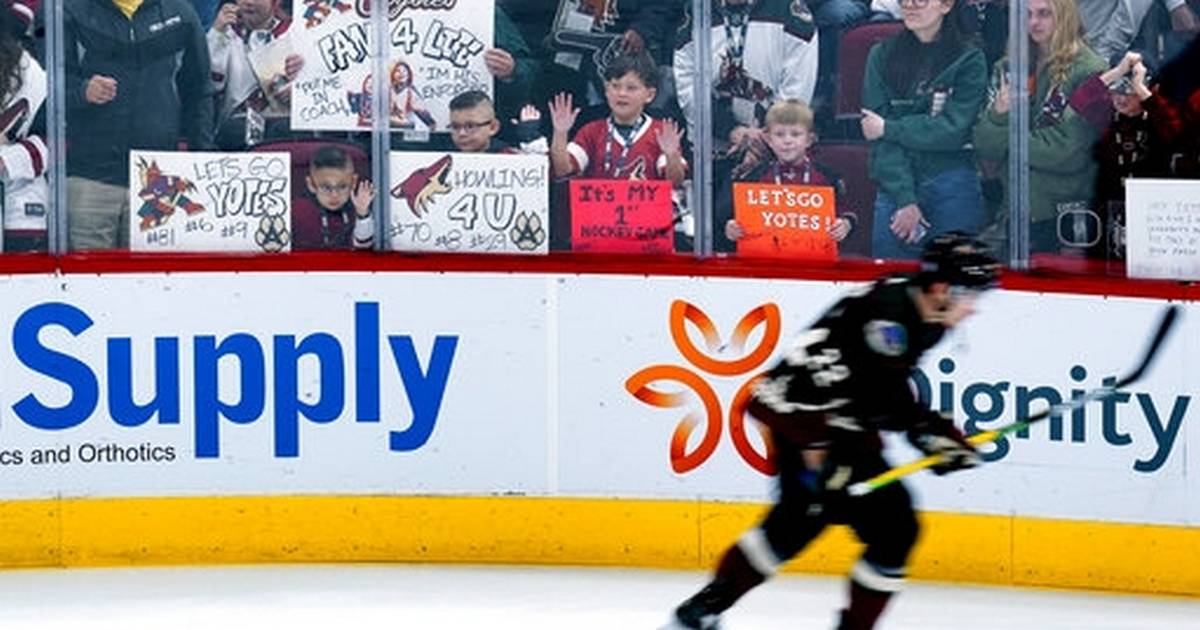 GLENDALE, Ariz. — A contentious collaboration has come to a close in the desert.

The Arizona Coyotes played their final game at Gila River Arena on Friday night, ending a 19-year, drama-filled partnership with the City of Glendale. The Coyotes will play at Arizona State’s new hockey arena starting next season as the franchise waits word on a proposed new arena across the Valley of the Sun in Tempe.

Several former Coyotes returned to the desert for the final game at Gila River Arena, including former captain Shane Doan and Jeremy Roenick, who shared duties on the ceremonial puck drop.

‘I don’t want it to be over, but it is what it is between the city and the Coyotes,’ said Jennifer DelPrincipe, whose family’s had Coyotes season tickets since the 2014-15 season. ‘I wish what happened hadn’t happened, but that’s a done deal and we’re said that they’re moving from the West Valley.’

The road in and out of Glendale has been a rocky one.

When the Coyotes first moved from Winnipeg in 1996, the team shared America West Arena with the NBA’s Phoenix Suns in downtown Phoenix. The team moved to Gila River Arena in 2003, but faced near-constant relocation rumors as ownership changed hands.

Former owner Jerry Moyes took the Coyotes into bankruptcy in 2009 and the NHL operated the franchise for four seasons after Canadian billionaire Jim Balsillie’s bid to buy the team and relocate it to Hamilton, Ontario was blocked.

The Coyotes reached a pinnacle in 2012 despite the financial constraints of being run by the league, earning a trip to the Western Conference Finals.

It’s been a struggle in the desert since.

Arizona has annually been one of the NHL’s worst teams and among the lowest in attendance. Off the ice, the Coyotes found themselves searching for a new home when the city of Glendale voted to terminate a 15-year, $225 million lease agreement in 2015.

The Coyotes had been playing at Gila River Arena on an annual lease, but Glendale announced it would not renew it for the 2022-23 season.

Arizona went through more ownership changes, first when Andrew Barroway bought a majority stake in 2017, then when Alex Meruelo took over the team in 2019.

Meruelo has said he wants to keep the franchise in Arizona and the team submitted a bid for a tract of land in Tempe in what could be the first step to landing a permanent home.

‘It’s going to be tough to leave that,’ Coyotes forward Christian Fischer said. ‘As a Coyotes organization and myself personally, we’ve had some really fun times at that arena.’

The decision to play at Arizona State’s new arena has generated mixed reviews.

The arena will have a capacity of 5,000, making it the NHL’s smallest venue by far, but also should generate an intense, intimate atmosphere. But with the smaller size comes a bigger price – season tickets will be up to four times more than current prices.

The uptick in cost will preclude some fans from buying season tickets – DelPrincipe and her family of four among them – but the move could be a step to finally giving the franchise some stability.

‘We just want there to be a plateau in drama so the fans and the players don’t have to deal with this negative drama that always seems to be around the team,’ said DelPrincipe, who lives in Surprise. ‘Hopefully, if the arena in Tempe gets approved, things can get back closer to normal.’