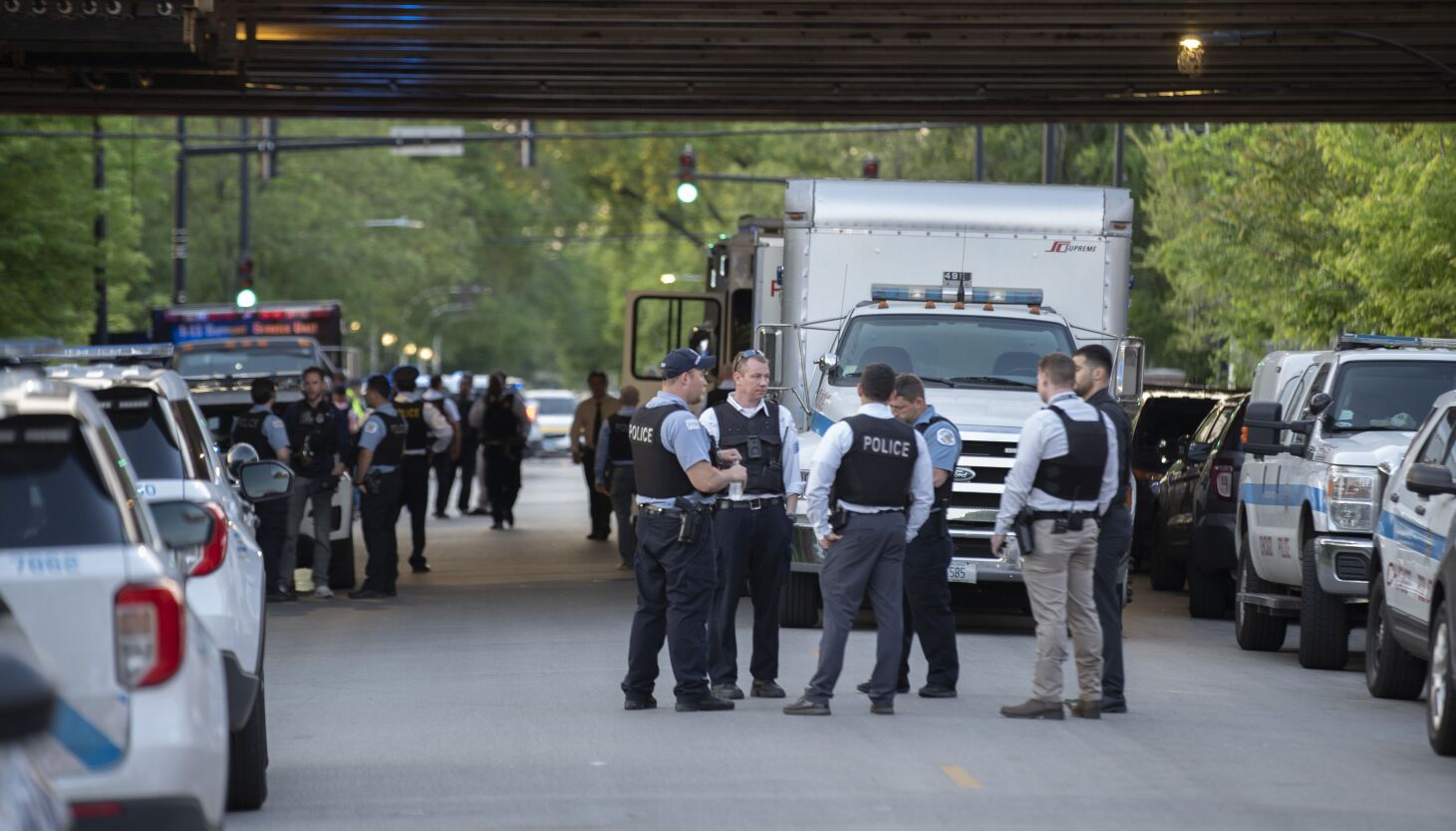 A man with an arrest record for gun crimes is suspected of shooting and seriously wounding a Chicago police officer in Englewood Wednesday evening.

The 28-year-old man, who remains at large, is identified in a police alert as the gunman who opened fire on a marked Chicago police car around 5:45 p.m. in the 6100 block of South Paulina Street.

Two officers in the car had tried to stop a blue car but it sped off, then slowed until the officers were alongside, according to police. Shots were fired from the car and the officer behind the wheel was hit in the shoulder.

Her partner jumped into the driver’s seat and took her to the University of Chicago Medical Center, where she was listed in serious condition. Her name has not been released.

Two people fled on foot after crashing the car near 64th and Bishop streets. A SWAT team searched nearby buildings but no one was arrested. A gun and car keys were recovered near the scene, according to Police Supt. David Brown.

The suspected gunman lives less than two miles from the shooting, according to the alert. The Sun-Times is not naming him because he has not been charged.

Court records show he was arrested in October of 2020 after he was spotted speeding and running red lights on the South Side. Arresting officers found a Smith and Wesson handgun under the driver’s side floor mat.

Ald. Ray Lopez (15th) — who represents the ward where the shooting occurred and where the wounded officer’s family lives — characterized the shooting as an “assassination attempt.”

“Having anyone drive up alongside an officer … this was basically an assassination attempt. There’s nothing unintentional about what happened,” Lopez said.

The shooting occurred less than a mile from where Chicago Police Officer Ella French was killed and her partner seriously wounded Aug. 7 last year in West Englewood. The officers were shot during a traffic stop at 63rd Street and Bell Avenue and returned fire, hitting and wounding at least one suspect, police said.

Mayor Lori Lightfoot said Thursday that the latest shooting is yet another “stark reminder” of the dangers Chicago police officers face, particularly from hardened criminals who have become more brazen and emboldened.

“The thing that is most horrifying to me is that uniformed officers in a marked squad were purposely targeted and attacked,” the mayor said.

“I said to the superintendent, ‘Spare no expense. Get our federal partners involved. We need to make sure that the person who is responsible for this is brought to justice.’ And I’m hoping that we’ll see that there’s an arrest that’s made relatively soon.”

Lightfoot said the wounded officer is “recovering from her injuries,” thanks to her quick-thinking and level-headed partner and experienced emergency medical care.

“Thank goodness this young officer did not lose her life. Her partner acted quickly and drove her to the hospital — one of the finest hospitals in the nation and, unfortunately, one with a lot of experience in treating gunshot victims,” the mayor said.

“But we have to make sure that we’re continually and diligently thanking our officers for the sacrifices they make,” she said. “We have to remember that men and women of the police department are the only ones who run toward danger. They protect us every single day, seven days a week, every watch, 24 hours a day.

“And yes, we need to make more progress on reform,” the mayor added. “But cannot lose sight that they are risking their lives literally every day for our safety. Yesterday, unfortunately, was a stark reminder.”