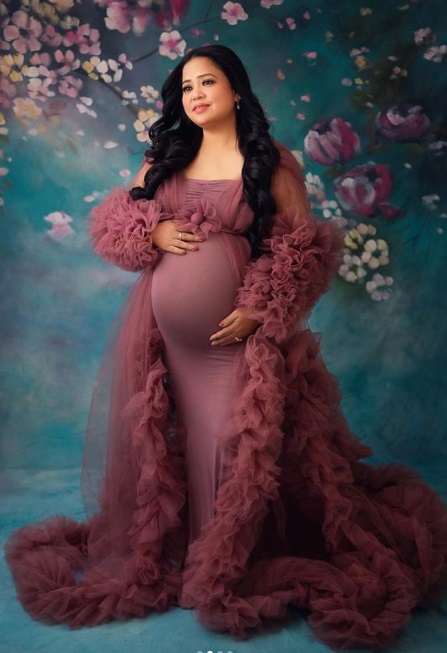 Comedian Bharti Singh, is expecting her first child with husband Haarsh Limbachiyaa. The mom-to-be took to social media to share pictures from her maternity shoot. The Khatra Khatra show host, who is eight months pregnant, shared some dream-like shots on her Instagram. In the caption she wrote, “Aane wale baby ki mummy (mother to the soon-to-be-born baby).”

Bharti looks beautiful in the shoot and you can’t miss her pregnancy glow in the pictures. She added hashtags, #babycomingsoon #momtobe #love #lovelyfeeling #blessed #ganpatibappamorya #bhartisingh #haarshlimbachiyaa to the caption.”

Dressed in a wine-coloured gown layered with a sheer cape of the same colour, she can be seen cradling her baby bump in the photos. She opted for a subtle makeup look with her hair kept loose. The floral background adds a dreamy touch to the shoot.

Take a look at the beautiful photos:

Here’s the cute Holi wish from the parents-to-be:

It was after over two months of conceiving that the comedian found out she is pregnant. In an interview with Pinkvilla, Bharti said, “When I got pregnant, for two and a half months, I did not even realise it. Mote logon ka pata nahi chalta. I am eating, shooting, running around, and dancing on Dance Deewane. Then I thought let’s just check it once. When I did, I put the test down and came outside. When I went back to it and saw the two lines, I told Harsh about it. So that was a surprise for us. We did not plan that this is the right time to have a baby.”

These days, Bharti is hosting Hunarbaaz and has also launched the third season of her and Haarsh’s show, Khatra Khatra Khatra.