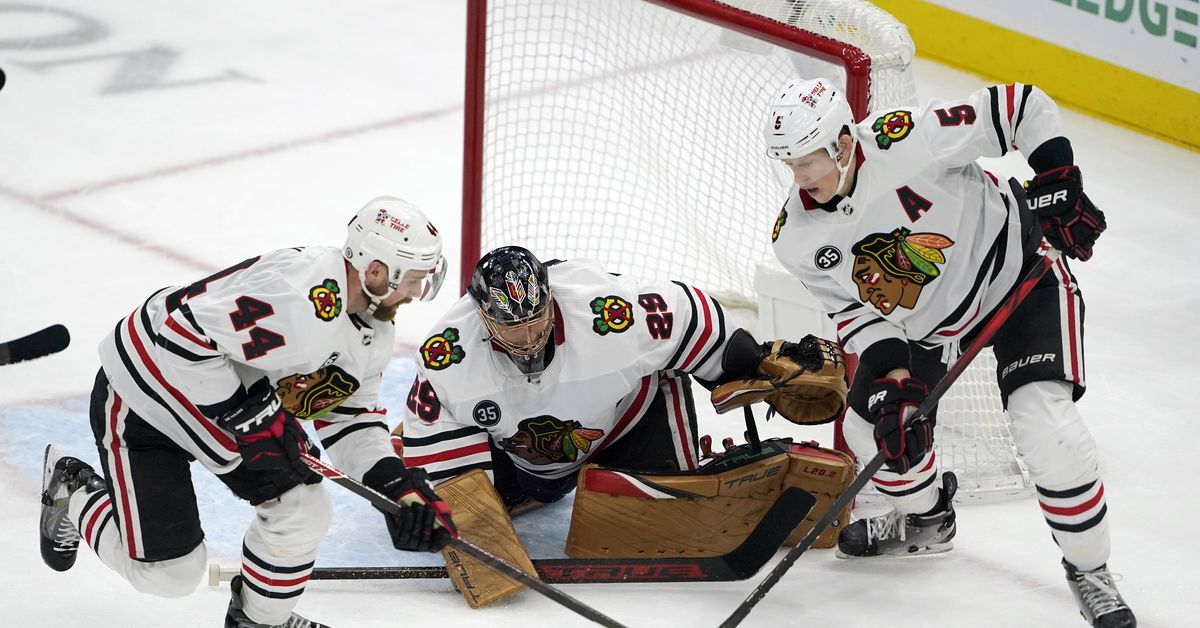 DENVER — After 41 games that felt more like 410, the first half of the Blackhawks’ 2021-22 season finally concluded Saturday.

It’s a half-season the 15-19-7 Hawks would love to forget but that shouldn’t be forgotten, albeit because of the sexual-assault scandal, fallout and lessons learned rather than because of the poor on-ice results.

Even on the ice, though, it was a struggle, with the coaching change from Jeremy Colliton to Derek King improving but not entirely fixing the problems.

Here’s a comprehensive breakdown of the Hawks’ team statistics at the season’s midway point.

The Hawks rank 32nd in goals per 60 minutes at 2.04. That’s easily the ugliest number from their first half. Only five other teams — the Islanders, Canadiens, Canucks, Coyotes and Flyers — are even below 2.30.

They’re not much better at the things that build up to scoring goals, ranking 28th in shot attempts, 30th in shots on goal, 29th in scoring chances and 32nd in expected goals, per Natural Stat Trick.

Digging deeper, the Hawks’ scoring struggles may stem from their one-dimensional offense. As has been the case for years, they’re dangerous on the rush, ranking 11th in controlled offensive-zone entry rate and 12th in shot attempts in transition (per data analyst Corey Sznajder’s tracking). But excluding rush situations, they rank 32nd in shot attempts in all other situations — like cycling and forechecking — combined.

Defensively, the Hawks are a more respectable but still below-average 21st in goals against per 60 minutes at 2.94. They’re 26th in shot attempts allowed, 21st in shots on goal allowed, 24th in scoring chances allowed and 16th in expected goals allowed.

They’ve been steadily trending up in those regards under King, however, and actually rank fifth in the league — behind only the Canucks, Kings, Avalanche and Islanders — in goals against per 60 (2.36) since King took over Nov. 6. They’re also 18th in scoring chances allowed and 14th in expected goals allowed under King.

Comparing their offensive and defensive outputs, their 45.1% scoring chance ratio ranks 28th — ahead of only the Red Wings, Flyers, Senators and Rangers — but marks a slight improvement over their 30th-ranked 44.7% ratio last season.

The ‘PP’ unit falls roughly in the middle of the pack in shot attempts (20th), shots on goal (17th), scoring chances (18th) and expected goals (15th). Their strategy is primarily based on cross-seam passes; they’ve attempted the fifth-most such passes, per Sznajder.

Adding the ‘PP’ and ‘PK’ rates together, the Hawks’ special-teams effectiveness score comes out to 94.9, which ranks 23rd; naturally, 100 is the average. But they are somewhat balancing that out with a plus-11 differential in power plays drawn vs. conceded.

Despite Marc-Andre Fleury’s individual excellence in recent months, the Hawks’ team goaltending — like everything else — also falls below average across the board.

Although the Hawks’ defense hasn’t been great, as discussed above, it has helped Hawks goalies face the eighth-fewest rush shots and 14th-fewest rebound shots against.

Note: Backup goalie Kevin Lankinen was placed on injured reserve Sunday with a right hand injury he suffered Saturday and is expected to miss a few weeks. Arvid Soderblom was called up to be Fleury’s new backup.