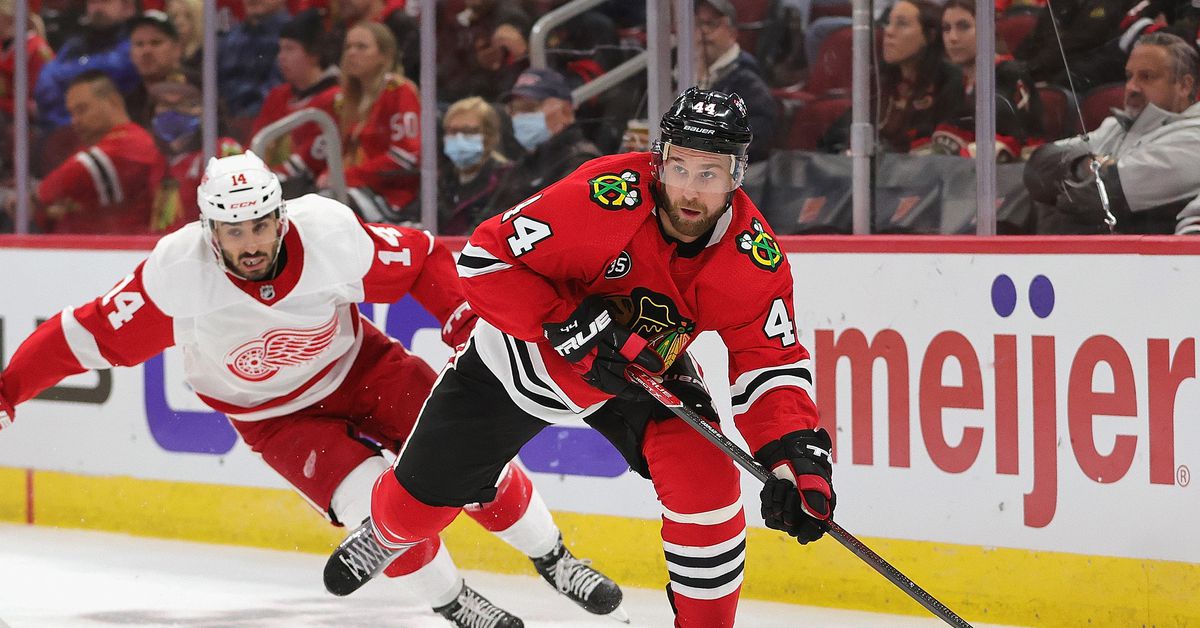 The holiday break will reportedly start early this year for the Blackhawks and the rest of the NHL.

But that decision has been made not out of festiveness, but rather precaution.

Faced with the impossible task of trying to slow a massive surge in COVID-19 cases, the league has instead decided to give up on this week. The holiday break, which was scheduled to run Friday through Sunday, was pushed up to start Wednesday and run through Saturday, per multiple reports Monday night.

The vast majority of the originally scheduled games around the NHL this week had already been postponed before the announcement, but one that hadn’t was the Hawks-Stars matchup Thursday at the United Center. That game will now be postponed, too.

Players, coaches, staff and all other members of each team’s “traveling party” will report to team facilities Sunday rather than Monday, however, for mass testing before hockey activities resume next week, Sportsnet’s Elliotte Friedman reported.

The league-wide schedule change came just hours after the Hawks became the NHL’s 24th team to have a player enter COVID-19 protocol, with veteran defenseman Calvin de Haan going on the list Monday.

De Haan is now one of 120 NHL players on the COVID list as of Monday night, although he’s the first Hawks player on the list since Tyler Johnson and Isaak Phillips’ absences ended in early November.

Fortunately, de Haan had still been held out of the Hawks’ last two games — Friday against the Predators and Saturday against the Stars — with an illness, even though it was considered non-COVID-related at the time. That, combined with the fact the Hawks did not practice Sunday or Monday, should hopefully reduce the likelihood of his infection turning into an outbreak.

‘‘It’s probably driving [the players] nuts that we’re reminding them every day [about] the hygiene part of it and to make sure we do all the right things to follow the protocols,” Hawks interim coach Derek King had said before the game Saturday.

The NHL had already temporarily tightened safety measures, shut down nine specific teams with outbreaks through the holiday break and halted U.S.-Canada cross-border travel before Monday, but the new policies proved unable to completely stop the virus’ currently rampant spread.

Even after the break, though, much remains uncertain.

The Hawks are scheduled to host the Blue Jackets on Dec. 28, visit the Jets on Dec. 29, visit the Predators on Jan. 1 and host the Flames on Jan. 2. But the Jackets, Predators and Flames were already shut down before Monday’s news because of internal COVID outbreaks, and the game against the Jets would require cross-border travel.

As of now, the Hawks need three home games to be rescheduled for later this season. With the NHL looking increasingly likely to pull out of the Winter Olympics, the three-week Olympic break in February has been floated as a logical time to play postponed games, but arena booking logistics could get in the way.

NOTE: The Hawks sent prospect forward Josiah Slavin to the American Hockey League on Sunday for playing time purposes, ending his first NHL stint after nine games. But there’s a good chance he’ll be promptly called up again once the Hawks’ schedule resumes.

Slavin has played well despite his lack of production (zero goals, one assist) and spent much of the game Saturday centering Patrick Kane and Alex DeBrincat.