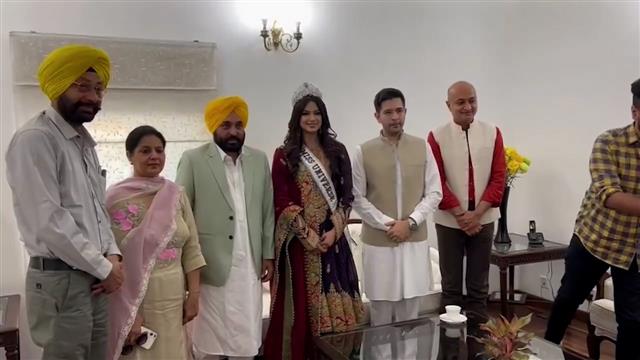 Chief Minister congratulated Harnaaz Kaur for making the country proud by bringing the title of Miss Universe back to India after 21 years.

Miss Universe @HarnaazKaur Sandhu called on CM @BhagwantMann today at his official residence. Chief Minister congratulated her for making the country proud by bringing the title of Miss Universe back to India after 21 years. pic.twitter.com/yy3RYfwDrG

Harnaaz Kaur has been in news for her views over girls being targeted on the issue of hijab.

Miss Universe 2021 Harnaaz Sandhu has appealed to the society to stop targeting girls, including on the issue of hijab, saying “Let them live the way they choose to.”

In a clip that has gone viral on social media, a reporter asked Sandhu about her views on the issue around hijab.

The video is part of an event held here on March 17 in the honour of the Miss Universe 2021’s homecoming.