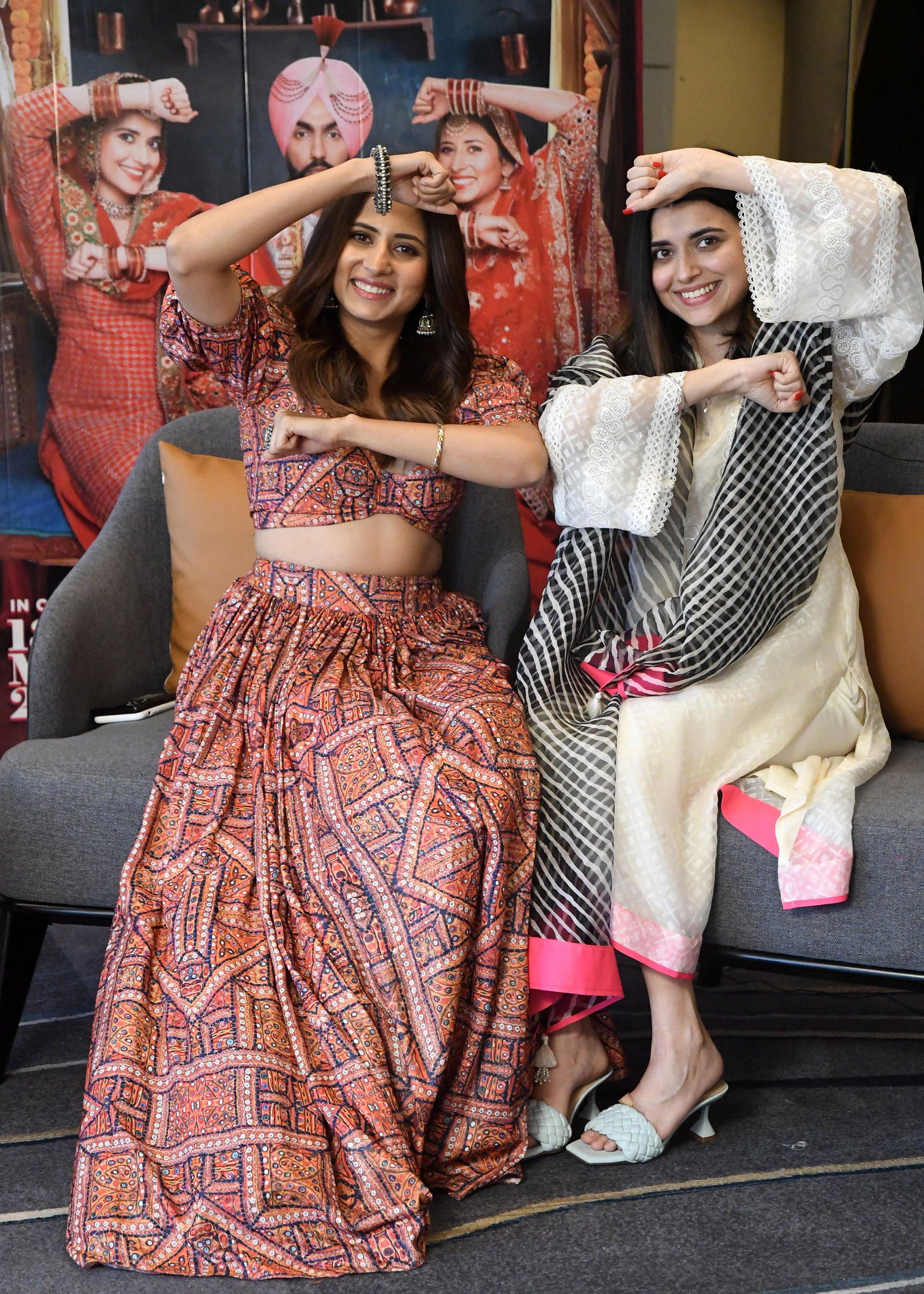 With so many reels and BTS videos, much before they even began promotions, the Saunkan Saunkane team has already built a lot of craze for the upcoming film. Starring Sargun Mehta, Ammy Virk and Nimrit Khaira in the lead roles, the Amarjit Singh Saron- directorial is based on a relatively unexplored subject in the Punjabi film industry. A couple married for over six years loses hope for a child. That’s when the wife (Sargun Mehta) convinces her husband (Ammy Virk) to marry her sister (Nimrat Khaira). While she wants to bring a girl she can trust and co-exist with, things turn out far from her imagination. And if you thought having two wives would have made Ammy’s life a matter of joy, think again.

So when sisters turn co-wives and have to share a husband, catfights begin. Although it hints at a lot of tension, one look at the trailer and you know viewers are in for a fun ride. Squabbles between Sargun and Nimrat, their attempts to win Ammy’s heart; his helplessness, his mother Nirmal Rishi’s anger at the whole mess, Saunkan Saunakne’s trailer and social media posts by the team have created a lot of buzz.

More than the chemistry of Pollywood’s established on-screen couple Sargun and Ammy, it’s the chemistry between Sargun and Nimrat that’s winning hearts. But it all began on the sets of Saunkan Saunkane. “We knew each other since we are in the same industry, but we’d hardly met or interacted before this film. We’ve forged a strong bond of friendship now,” the two leading ladies share. There are scenes where these women get physical; from pulling each other’s hair to a slap here, a punch there—none of it, they tell, was made up. “No camera tricks or pretence, the scene are real. We actually did hit each other and even Ammy, as and when the script required.” But there was no resentment at the end of such scenes. “If anything, we would just wait for the director to say cut so that we could laugh out loud and hug each other.”

A subject from the ‘80s when IVF and surrogacy were hardly an option, Sargun adds, “I have a domestic help, who is the second wife and there are many others who have lived this story that we are narrating in the film.” But to showcase a sensitive subject in the most comical possible way was a conscious decision. Sargun explains, “Lockdown made our lives so dull and boring. So our team knew we had to pack in as much laughter and humour as we could. Going by the response to the teaser-trailer and songs, we’ve hit the right chord.”

Nimrat is a popular name in the world of Punjabi music, but it’s only recently that she joined the film industry. Is acting the prime focus as music takes the backseat? “No that can never be. I am equally focused on both the mediums and there are new songs ready for release. I worked on these films during the lockdown, it’s just that now we are finally getting to release them and we are making the most of it.”

While Sargun was inclined to bring the story to the audience, both as an actress and producer, Nimrit’s recent experience with Amberdeep Singh (writer of the film) gave her confidence to play a parallel lead at the start of her acting career. These ladies agree there’s been a paradigm shift in the way women are being perceived in the Punjabi film industry. Sargun says, “Like all other branches of the Indian film industry, even in Pollywood now it’s no more about the actor; it’s about the story. If the story is strong, who plays the lead role becomes secondary. Content is above all and you can witness the shift in approach in the recently released Punjabi films.”