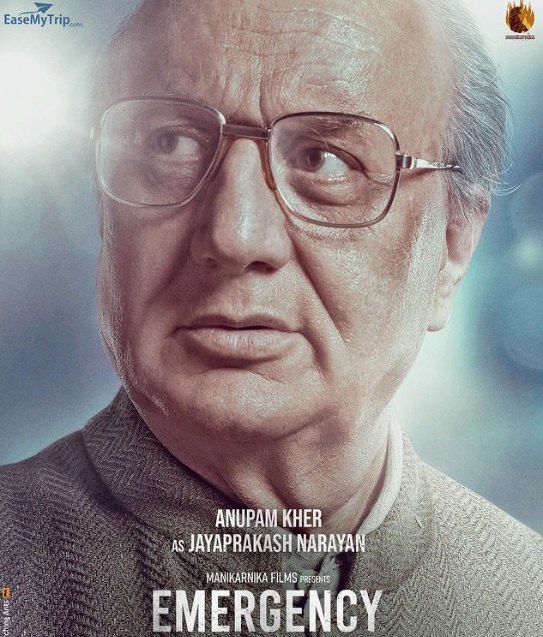 Jayaprakash Narayan was among the prominent leaders who stood against the Emergency.

Anupam says: “Kangana’s interpretation of JP Narayan is fascinating. She believes and it’s also the truth that JP Narayan is a hero of the film not just because I am playing the character but because that’s what he was. Her treatment of the character is like that of a hero.”

He goes on: “As far as essaying the role is concerned, even though I did my own research, Kangana made my job easy by providing me with her interpretation and the homework that she had done.” “That’s why it was easy to step into the shoes of JP Narayan. When you have a director, who knows his or her job, it becomes easy for an actor to follow those instructions and perform. Of course, there is hard work that goes into it but I am very happy that I am essaying the role of a historical figure who changed the scenario of independent India,” he adds.

Kangana, who is seen as late PM Indira Gandhi in the film, spoke about bringing him on board and the reason behind it.

“JP Narayan was the most powerful human being to have happened after Mahatma Gandhi in politics in recent Indian history. The kind of influence he had on people was enormous. I wanted an actor who had the personality and calibre to match up to that larger than life persona of Loknayak JP Narayan.” “Anupamji with his stature, acting skills, his overall persona fits into the role perfectly. I am privileged and humbled that he chose my script. I am nobody to choose him. He chose my script and I am honoured, to say the least,” she concludes.

Manikarnika films presents ‘Emergency’ which is written and directed by Kangana. The film is produced by Renu Pitti and Kangana Ranaut. The screenplay and dialogues are by Ritesh Shah.