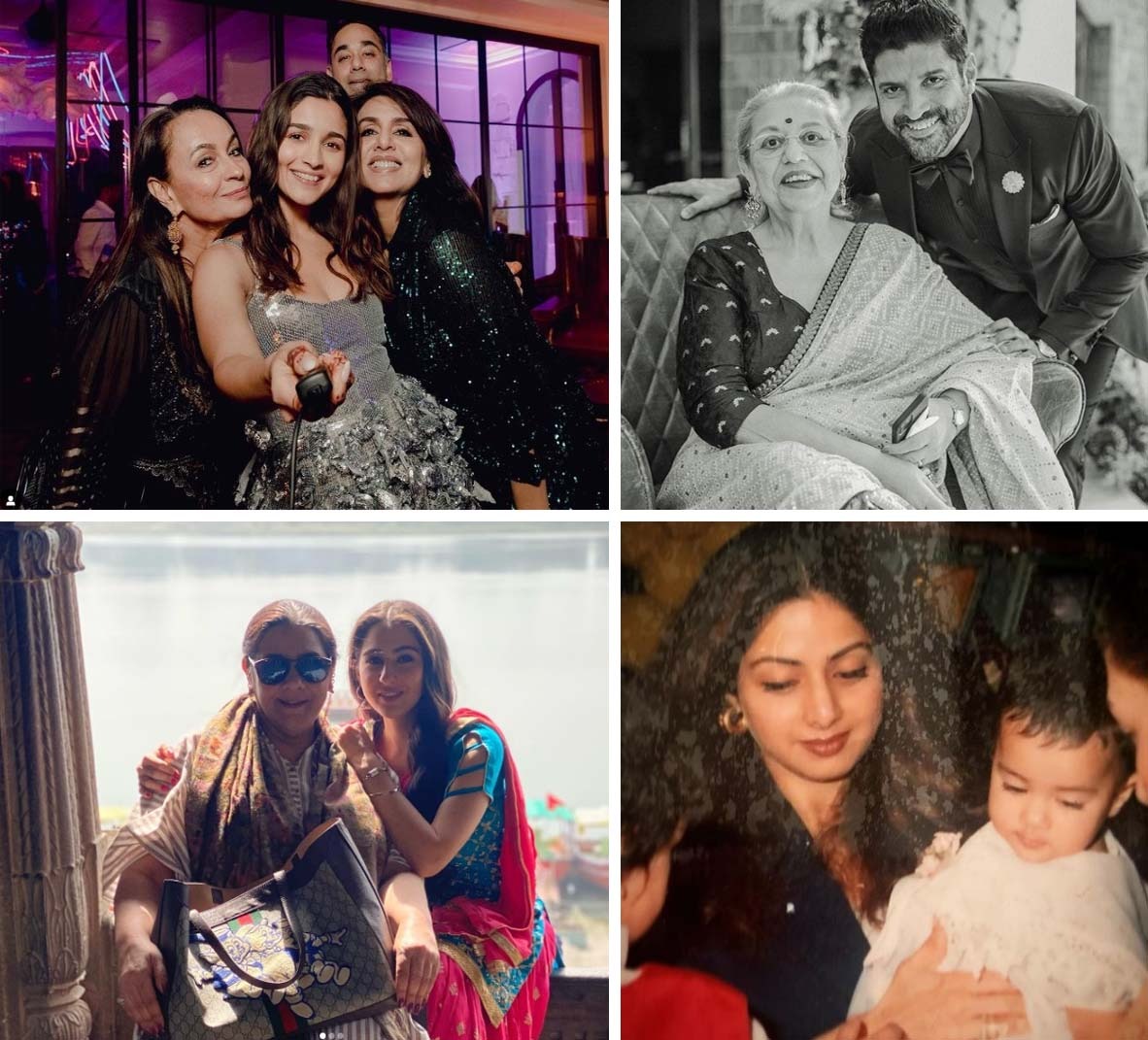 Mothers should be celebrated today, everyday! But on this special day dedicated to honour the maternal bond, celebrities made sure to pour out love for their moms with some throwback images and love-filled messages. No doubt then, that social media is a sight to relish.

Alia Bhatt began her day with sharing a glamorous picture with both her mothers- Soni Razdan and Neetu Kapoor. The three women dressed to a T seem to be enjoying a party together. Some fans speculate it’s a picture from Alia-Ranbir’s pre-wedding ceremonies. While Soni and Neetu are twinning in black, in the centre is Alia wearing a shimmery silver dress. Neetu’s son-in-law Bharat Sahni can also be spotted in the background, smiling to the camera, photo-bombing. Alia wished her moms with these words, “My beautiful beautiful mothers Happy Mothers Day – ALL DAY EVERYDAY!”

There is a cute photo that Sidharth Malhotra posted on his Instagram page that has him hugging his mother who is enjoying a bunny filter. The actor says, “Me with the Most natural poser in the family, Happy Mother’s day Ma. Thank u for everything, love you.”

Kangana Ranaut shared a throwback photo with her mother and sister. All three women dressed in red, it looks like a picture from those innocent days in the hills. The actress wrote, “Happy Mother’s Day to all.”

Sara Ali Khan, who has often shared that her mom is her best friend, posts regular photos with former actress Amrita Singh. From being travel buddies, to exploring new dishes and being around Sara during her outdoor, late-night shoots, Amrita makes sure to keep her daughter secure. On this special day, Sara wishes her mother with a photo dump and these cute words, “Happy Mother’s Day Mummy. Loved you since I was in your tummy. P.S I love the fact that you’ve visited every set of mine. To make you proud is why I try to shine.”

Actor-director Farhan Akhtar also wished his mother Honey Irani. In a beautiful shot from his wedding celebrations, he is posing next to his mother. Their eyes shine with love and the way Farhan is holding her arm reflects his respect for Irani. Keeping it short and sweet, Farhan wrote, “Happy Mother’s Day,” and tagged his mom.

Just in one frame, Madhuri Dixit gave us a glimpse of all the strong women in her life. She dropped a photo with her mother and two elder sisters. In the caption, the actress wrote, “All that I am, all that I will ever be, it’ll be all your reflection Aai. Happy Mothers Day.”

Every so often, late actress Sridevi and Boney Kapoor’s daughters Janhvi and Khushi Kapoor voice their love for their mother. They couldn’t have missed this day to tell the world how much their mom means to them, ‘even in her absence’. So, with a throwback photo that has Sridevi holding Janhvi Kapoor (we assume since she shared the photo) in her arms, the star kid wrote “Even in your absence, I feel your love everyday. Even in your absence, you’re the best mother in the world. love u.”

Karan Johar also shared a collage of two adorable pictures. In one, he is hugging his mother-filmmaker Hiroo Johar, and the second one has Hiroo in a group hug with Karan and his two children Yash and Roohi. Karan wrote, “Happy Mother’s Day to all….. “ followed by hashtag blessedwiththebest.

Telegu actor Ram Charan created a video with several pictures that has his mother Surekha, father Chirnajeevi and wife Upasana Kamineni.” There is also a shot where Surekha is feeding their pet dog. Expressing his love for mommy dearest, Ram Charan captioned it, “Love you maa!! Happiest Mother’s Day to all.”

On the occasion of Mother’s day, Dharmendra’s grandson and Sunny Deol’s elder son, Karan Deol dropped a message for his mother. Karan has been quite vocal about his relationship with father Sunny Deol, but not many know that he is very close to his mom. Two pictures, one from his childhood and another that has his brother and mother along with him, Karan wrote, “#HappyMothersDay Mom, I know being a mother isn’t the easiest but you rock it with just being yourself! Love you #Mom.”