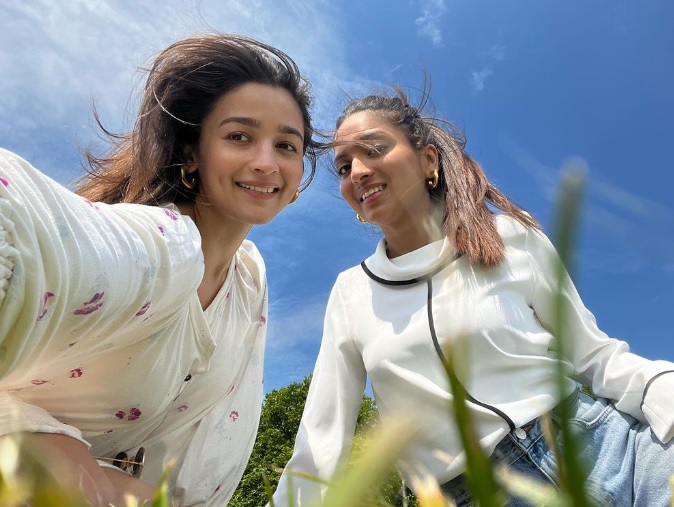 Alia Bhatt recently announced she is making her Hollywood debut when she shared a selfie on her Instagram and wrote, “And off I go to shoot my first ever Hollywood film!!!! Feel like a newcomer all over again – sooooo nervous!!!! Wish me luckkkkkkk.”

That was two weeks back. Cut to the present, the Bollywood actress who is reportedly in London for the Hollywood project has set out on an adventure with her friend Tanya Saha Gupta. Alia gave us a glimpse of her time with Tanya where both the ladies can be seen enjoying at a park. Alia in a white dress and Tanya in a white top and denim, the two women seem to be relaxing amidst lush green grass and clear blue sky.

In the caption, Alia wrote, “Sometimes the greatest adventure is simply a conversation —— Amadeus Wolfe.”

Sister-in-law Karisma Kapoor was quick to complement Alia and her friend. She wrote, “Gorgeous girls,” followed by a purple heart emoji.

At the start of the week, Alia shared some sun-kissed pictures in which she can be seen enjoying her time out in the nature. Smiling to the sun with eyes closed, laying on the grass, the pictures show a happy, carefree Alia. Sharing the clicks, Alia wrote, “just give me my sunshine and I’ll be on my way.”

Take a look at the photos:

Alia Bhatt is currently shooting for her Hollywood debut movie titled Heart of Stone. She will next be seen in the much-awaited Brahmastra Part 1, Shiva with Ranbir Kapoor. The film will be their first as husband-wife. It is on the sets of this Ayan Mukherji directorial that the two fell in love. Brahmastra will hit theatres on September 9 this year.