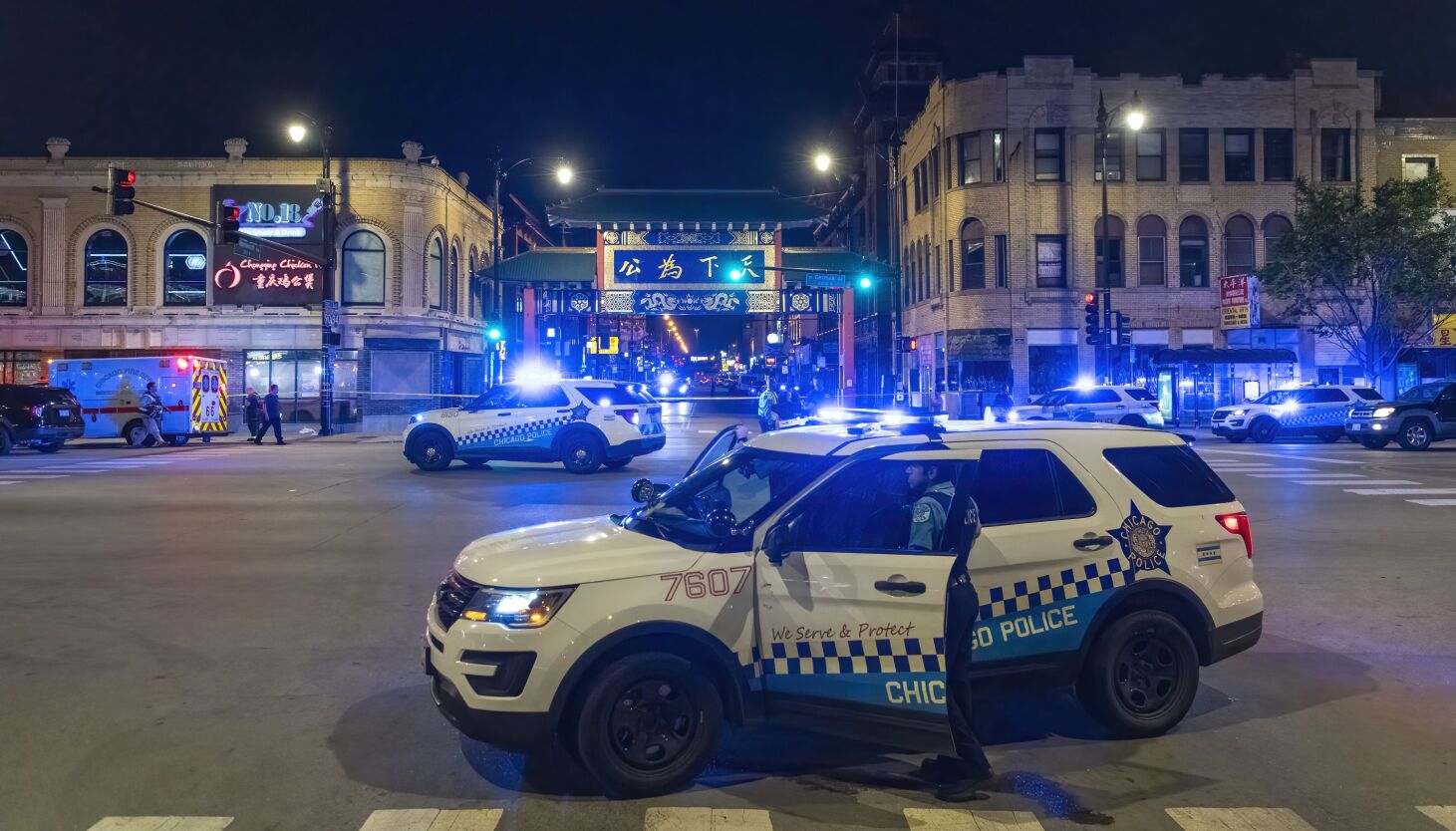 At least 37 people have been wounded, eight of them fatally, in shootings across Chicago so far this weekend.

Last year, over 100 people were shot over the long Fourth of July weekend, 19 of them were killed. Seeking to prevent a similar surge in violence this year, Chicago Police Supt. David Brown said residents should expect to see a heavier police presence in their neighborhoods.

In fatal attacks this weekend, a woman was killed and a gunman was among two others wounded in a shootout Friday night in Chinatown, Chicago police said.

A man and another gunman were shooting at each other about 10:50 p.m. in the 2200 block of South Wentworth Avenue, police said. A 24-year-old woman was struck in the torso and was taken to Stroger Hospital, where she died due to her injuries.

A second woman, 42, was taken to the University of Chicago Medical Center with a gunshot wound to her hand, police said. She was listed in good condition. One of the gunmen, a 38-year-old man, was shot in the buttocks and was taken to Northwestern Memorial Hospital, where he was in critical condition.

Three people were shot, one fatally, in a backyard early Sunday morning in Grand Crossing on the South Side.

The attack occurred during a violent eight-hour span in Chicago during which at least 16 people were shot, two fatally, late Saturday into early Sunday.

The victims were with multiple people in the backyard of a house about 5:30 a.m. in the 7000 block of South Harper Avenue when someone approached and fired into the crowd, police said.

A man, 24, was shot multiple times in the body and pronounced dead at the scene, officials said. Two women, 24 and 30, both suffered multiple gunshots to the body and initially went to Jackson Park Hospital before going to the University of Chicago Medical Center, police said. The younger woman’s condition was stabilized and the older woman was in good condition.

A man was fatally shot Friday in Englewood on the South Side.

The 26-year-old was outside about 5:45 p.m. in the 6500 block of South Wolcott Avenue when someone approached him and opened fire, police said. He was struck in the arm and head and was transported to the University of Chicago Medical Center where he was pronounced dead.

Less than an hour earlier, a man was fatally shot in West Garfield Park.

About 5 p.m., Keishone Roberts, 29, was in the 4300 block of West Van Buren Street when someone approached him and opened fire, police and the Cook County medical examiner’s office said.He was shot multiple times and taken to Stroger Hospital, where he was later pronounced dead.

Just after midnight Saturday, a man was shot to death in South Chicago on the Far South Side.

About 12:20 a.m., the man, 30, was in the 9000 block of South Escanaba Avenue when he was shot in the head, police said. He was taken to the University of Chicago Medical Center, where he died.

A man was fatally shot while riding inside a vehicle early Sunday in Brighton Park on the Southwest Side.

About 3 a.m., the man, 35, was in the passenger seat as a female driver was traveling in the 3800 block of South Kedzie Avenue when he was struck in the neck by gunfire, police said.

The driver then drove about two and a half miles to the 5600 block of South Spaulding Avenue, where she called police, officials said.

The man was pronounced dead at the scene, police said. His name hasn’t been released yet.

A man was killed in a shooting Saturday in South Shore.

About 4 p.m., he was riding a bike in the 2100 block of East 71st Street when someone fired shots at him from a dark-colored sedan, police said.

The 26-year-old was struck in the head and arm, and taken to the University of Chicago Medical Center, where he was pronounced dead, according to the Cook County medical examiner’s office.

A man was fatally shot sitting outside a residential building Sunday morning in West Humboldt Park on the West Side.

The man, 38, was sitting outside the building about 10 a.m. in the 700 block of North Springfield Avenue when he was shot in the chest and head, police said.

He was taken to Stroger Hospital, where he was pronounced dead, officials said.

Hours later, a man was shot walking in Chicago Lawn on the South Side.

The man, believed to be between 25 to 35 years old, was walking about 12:50 p.m. Sunday in the 6500 block of South Kedzie Avenue when a dark colored vehicle approached and someone inside got out and opened fire, police said.

He was taken to Christ Medical Center in Oak Lawn with multiple gunshot wounds to the head, police said. He was later pronounced dead, officials said.

In nonfatal attacks, Four people were wounded in a shooting Friday evening in West Garfield Park.

Just after 9 p.m., a male walking down the 3800 block of West Monroe Street opened fire, striking multiple people, according to the police.

A man, about 25 years old, was struck in the back and taken to Mount Sinai Hospital in serious condition, police said.

A woman in her 20s was hit in the leg and taken to the same hospital in good condition, police said.

Another woman, 36, and a man, 41, both suffered gunshot wounds to the back, police said. The pair were transported to Stroger Hospital in good condition, police said.

A 90-year-old man was hospitalized in critical condition after he was shot Saturday morning in North Lawndale.

The man was found about 10 a.m. in the 1500 block of South Harding Avenue with a gunshot wound to the abdomen, police said.

He was taken to Mount Sinai Hospital in critical condition, according to police.

Detectives were speaking to a person of interest.

A 17-year-old girl was among two people shot and wounded early Sunday in Bronzeville on the South Side.

The teen and a woman were standing outside about 12:45 a.m. in the 3700 block of South Langley Avenue when someone opened fire, striking them both, police said.

The girl was struck once in the arm, and the 42-year-old woman was shot in the foot, officials said. They went to the University of Chicago Medical Center and were both listed in fair condition.

A witness told officers the shooter may have been traveling in a car, authorities said.

Hours later, a man was shot during an argument after a traffic accident n Rosemoor on the Far South Side.

The accident occurred about 3:20 a.m. in the 10300 block of South Cottage Grove Avenue when the driver of one vehicle struck the man’s vehicle, police said.

He was taken to Christ Medical Center in Oak Lawn, where he was listed in fair condition, police said.

A couple of hours later, a man was shot after confronting a person trying to break into his car Sunday morning in Burnside on the South Side.

About 5:30 a.m., the man confronted someone trying to break into his car in the 9300 block of South Rhodes Avenue when he was shot multiple times in the body, police said.

The 38-year-old was taken to the University of Chicago Medical Center, where he was listed in serious condition, police said.

At least 16 other people have been wounded in citywide shootings since 5 p.m. Friday.

Last weekend, six people were killed and at least 27 others were wounded in Chicago.